HeartUnions: celebrating your voice at work. 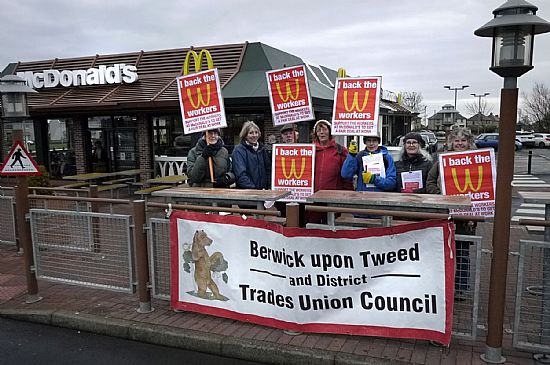 A week of celebration focusing on the good work that unions do. Unions help workers get together, stop people being treated unfairly and get a better deal from their employers.

Berwick Trades Union Council along with local activists staged a successful event at Berwick McDonald’s on Sunday. The focus is on McDonalds’ as the Bakers Food And Allied Workers Union (BFAWU) is on a recruitment drive; through unity of action workers can achieve an end to low pay and insecure hours. TUC “HeartUnion” leaflets were handed out to customers who were also asked to a sign a petition asking Paul Pomroy, CEO, McDonald’s, UK to “Pay Staff the Living Wage, End Zero Hours Contracts, Recognise the Trade Union".

We received a friendly reception at McDonald's and the BFAWU union assures staff that it is their legal right to join a union and “there is no issue from McDonald’s if that is what they want to do”.

Berwick Trades Union Council is the collective voice of unions in Berwick and East Berwickshire. If you are a trade union member or support the aims of trade unions, please come along to our meetings and events.