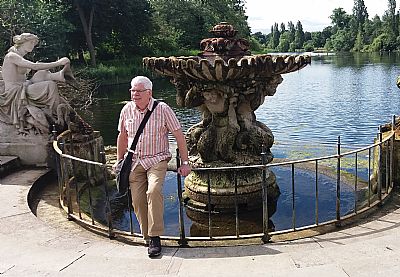 This aricle will be updated as tributes come in.

“On Saturday 5th November at 10:30 am will be funeral of our beloved friend and founder Gerry at Houndwood Crematorium near Eyemouth, post code TD14 5TP. Everyone is welcome. Family asked to not bring flowers as there will be open a donations account. There is NOT dress code, so You can wear what You want. After ceremony we will move back to Berwick to Youth Hostel to celebrate Gerry’s life. People who will need transport please contact the BMSG page as soon as possible as we might will offer a lifts or organise the bus. As a group we would like to contribute to give Gerry send off which he deserves so we would like ask people to get in touch if You would like to help and get involved. Many thanks”

Just wish to acknowledge how wonderfully well the celebration of Gerry’s life and send-off was on Saturday. And in addition to Gerry’s dignified, generous and very elegant family contribution to its success, how indebted we all are to the members of the Migrant Group whose input not only filled our bellies, but our heart’s and soul’s also. They spoke so well, as did Carl and others, and spoke for all of us, of a Gerry Jones who was a master-class of what it is to be truly human.
Paul Mc Donald

Gerry Jones has died suddenly at the age of 70, a couple of weeks after being diagnosed with cancer.

Gerry’s life as an SWP member and socialist activist can be divided into three stages. In the first he came of age politically in the heady and turbulent late 1960s and early 1970s. He then survived the hard years as a trade unionist in the declining car industry of the 1980s and 1990s. Finally, this “Coventry kid” found a new outlet for his energy, enthusiasm and activism in rural Northumberland.

A car worker at the Chrysler (later Peugeot) engine factory, he joined the International Socialists (IS)—the forerunner of the SWP—became a Transport and General Workers’ Union (TGWU) shop steward, and was part of the network that wrote for and sold the rank-and-file paper Carworker.

A flavour of the political battles within the shop stewards’ movement at the Chrysler factories in Coventry can be found in a study of three strikes in 1972–73 in International Socialism 64 (1973). One of these was against the victimisation of the leading IS member at Gerry’s factory.

During the long 1975 wage strike at the factory, his then wife Carmel, with his baby son Carl, was part of a picket line of strikers’ wives against a counter-picket of other wives attempting to get the strikers back to work.

Gerry became TGWU deputy convenor in the late 1970s. In 1980 when his factory went on short-time at less than one day per week (five working days in six weeks) he helped sustain union organisation, including through involvement on a welfare rights committee.

In the 1980s as the factory ran down he was transferred to the track at Peugeot’s nearby Ryton assembly plant. He used his influence and reputation to support other stewards as shop-floor organisation was rebuilt after its collapse in the early 1980s. In the meantime many foremen were the butt of Gerry’s wicked sense of humour.

This work paid off with a successful strike at the warehouse, with Gerry’s experience crucial in organising the picketing.

Outside work, he was heavily involved in running boys’ football teams and later studied for a part-time degree at Warwick University.

Gerry moved to north Northumberland in 2001, eventually working for the Citizens’ Advice Bureau (CAB). After retirement he worked for the CAB one day a week in remote rural areas. Among his jobs was writing letters to powerful employers, pointing out where they were in breach of the law.

Gerry became a well-known figure in local communities. He brought to local Stop the War and anti-fascist campaigning his years of organising experience.

But his main achievement in Northumberland has been his work with the Berwick Migrant Support Group, which he founded and for many years was its driving force. This is a truly internationalist project, providing free English classes and much more. Gerry also saw the importance of training community mentors and specialist support volunteers in different languages.

Social gatherings, where different foods and cultures are showcased, and days out, especially learning about the local area, are integral to the success of the group. One of the annual highlights is the trip to the Edinburgh Festival. Gerry was there again this August, checking the coach had left the depot on time, but unable to do much walking himself in Edinburgh.

Gerry Jones was a lovely man and great fun to be with. His death is a serious loss to the movement.

Our sympathies are with his son Carl, daughter Kelly, his grandchildren, other members of his close family, and his many friends and comrades.

Berwick Trades Union Council is very saddened at the death of our comrade Gerry Jones on 23rd October. Gerry was a committed activist with the council and will be sorely missed. Gerry was very active in our local community: he was instrumental in setting up and running the Berwick Migrant Support Group (BMSG), which is of huge value to our migrant population; Gerry was also an advisor with the CAB. In fact, Gerry described himself as a public not a private person and remained so right up to the last, always involved, always wanting to know how things were going with the BMSG, the trades council and the CAB.

His life was marked by one running theme, cutting through all the political activism was a deep-rooted commitment to helping people in need and the local community in general. Gerry started his working life in Coventry with the car industry and quickly became involved in the trades union movement but it was his later life when he moved to Northumberland that we knew Gerry. Gerry loved the Northern part of Northumberland and came to a very deep attachment to Seahouses and the Farne Islands.

Personally, I will miss Gerry greatly. Up till just a few days before his death he would phone – I somehow always knew it was Gerry. He would say “Philip, (slight pause) it’s Gerry”. I would laugh internally at this, as I knew it was him as soon as I picked up the phone. It would usually be about some practical organisational thing but would quickly expand into a current political topic.

What I will remember most about Gerry though is not the politics but the genuine concern he had for others who needed help and his joy at the best of the human condition.

Gerry Jones, born in 1945, has died aged 70 after a short illness. It is with very fond and happy memories that I remember Gerry Jones. I met him in 1975, a car worker and TGWU steward at the Coventry Stoke Chrysler plant. He introduced me to the world of organised factory rank and file organisation.

He worked with Tony Cliff in the early 1970s touring the Chrysler plants for factory gate and canteen meetings. He taught me how to write factory leaflets and encouraged me as I stood at the gates handing them out. I remember our leaflet to defend abortion rights, calling on the Chrysler workers to support and join the national TUC demonstration. Gerry was patient and funny, with a wicked smile.

His contribution to building working-class factory organisation was enormous, both in his own plants and advising and supporting others. He organised strikes and constantly fought for fairness.

The economic downturn hit Coventry like a sledgehammer and Gerry focused on his kids and football, but was always open to a visit – if you could find him in. As Chrysler was taken over by Peugeot, Gerry was moved from plant to plant as each one closed – finally ending up at the much smaller warehouse at Tile Hill.

His last job as a forklift truck driver on nights was a terrible strain and he began part-time degree at Warwick University. We studied together and compared notes on how to cope with academia!

I last saw Gerry at his home in Northumberland where he insisted on taking me to a remote coastal pub/brewery to sample the ale. He seemed delighted with his job he described as a 'shop steward' of the community.

It is so sad that he's gone. It was such a privilege to have known him. 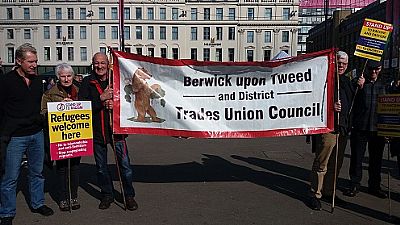 Gerry - on the right - Glasgow