Campaigners from Action for Rail, Berwickshire Granarchists and Berwick Trades Union Council were out in force at Berwick Station this morning, joining thousands of other similar actions across the country, in protests against rising fares, against cutting staff and demanding renationalisation of the railway.

Phil Thompson of Berwick Trades Council said, 'We already have the most expensive train fares in Europe but they want to increase fares by another 1.9%. This isn't to improve staffing levels, to improve customers' convenience and safety, because they intend to cut staff levels both in the trains and in the stations. It's all about putting more money in the pockets of shareholders - dividends paid to shareholders of private train companies increased last year by 21%'. 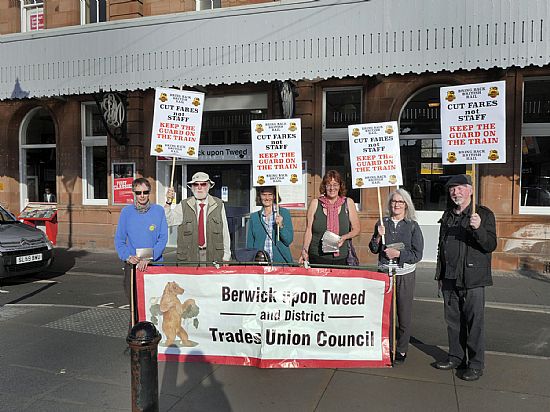 Berwickshire Granarchist Kate said, 'It's a really heartening action to take. Almost everyone is in favour of renationalising the railways. Thumbs up all round for our placards. People are fed up with fare rises and staff cuts and in particular, women I've spoked to this morning were really  concerned about the prospect of travelling on a train with no guard on board. Almost everyone had experienced some sort of behaviour which had made them anxious'.

Talks about cuts to staffing levels on Virgin Trains are due to take place this week and if no agreement is reached, strike action is on the cards for Friday 19 August and local activists once agains will be there to support the rail workers.