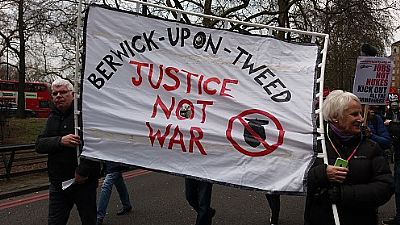 A group from Berwick joined the mass protest in London on Saturday against the proposed £150 billion renewal of the Nuclear Trident missiles demanding welfare not warfare.

Please visit the Stop the War and CND websites for more pictures and reporting.

We marched under the Berwick Justice Not War Coalition banner. This is the banner of our local peace group which meets the first Saturday of the month for half an hour at 11am outside Berwick Guild Hall. The Peace Vigil has a near continuous record of meeting since 2001.