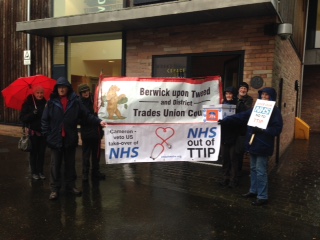 Almost 1000 residents in the constituency of Berwick upon Tweed have signed a petition to call on Anne-Marie Trevelyan to support their demand to get the NHS out of an EU trade deal which threatens the irreversible privatisation of our health service.

Campaigners expect the Eurosceptic MP to get to grips with the threat that the EU trade deal poses to the NHS. Anne-Marie Trevelyan is an outspoken critic of the EU but has not joined the calls to protect the NHS from the EU trade deal called TTIP.

Residents also want their local MP to demand to see the government’s legal advice which is being withheld from the public. Anne-Marie Trevelyan MP should call for its release and demand David Cameron takes the NHS out of TTIP.

The ‘Transatlantic Trade and Investment Partnership’ trade deal is being negotiated behind closed doors, between EU bureaucrats and delegates from the United States. It is the largest bilateral trade deal ever negotiated and threatens to make the on-going privatisation of the NHS irreversible. TTIP could grant American multinationals, or any firm with American investors, the power to sue the government if it ever attempted to take privatised health services back into public ownership.

Sue Richardson , local resident and spokesperson said: “The TTIP trade deal poses a real threat to the NHS. Almost 1000 residents have signed a petition calling on our local MP to get to grips with that threat.

“Anne-Marie Trevelyan, the local MP, is a critic of the EU but has not joined the calls to protect the NHS from the EU trade deal called TTIP which threatens the NHS with irreversible privatisation. She must also call for the release of the legal advice being withheld by the government about the NHS and TTIP.

“If Anne-Marie is serious about her concerns about the EU then she will stand up for our NHS and demand that David Cameron acts and protects the NHS from the EU trade deal called TTIP.”