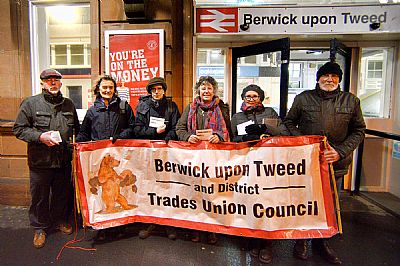 Early morning commuters braving the wet and windy first day back to work of 2016, were greeted at Berwick Station by the latest ticket price hike and by Action For Rail supporters protesting against it. They were offering passengers pre-paid cards to send to their MPs to make clear their feeling about the state of the railways - and most of these were gladly accepted.

At an average of 1.1% across the UK, this is the smallest increase in recent years, but it adds up to a massive 25% increase in fares since 2010, with fares rising three times faster than wages. Moreover, UK commuters pay by far the highest train fares in Europe, six times more of their salaries, than their European counterparts. France comes second and fares there are 30% less than in Britain.

Lorne Anton, of Action For Rail and a former signal man, said, ‘Passengers might not have the figures at their fingertips but they do know that prices are rising, that trains are often overcrowded, delayed and sometimes break down. Many travellers are fed up with years of failed privatisation want the railways taken back into public ownership’.

A recent YouGov poll found that 62% of British adults do indeed support public ownership and think fares are exorbitant.

Amongst the mornings commuters was Amber Varley from Berwick, concerned about how her daughter, a student at Newcastle College and commuting three times a week, will cope with the price rise. “At the moment,’ she said, ‘ her monthly £100 travel bursary lasts just two weeks and has to be topped up.’

Another Newcastle College student, Ross Bagley, says he travels from Berwick five days a week to his engineering course. He has no travel bursary so buys a student railcard which gives him a 30% discount. The rise will still hurt though, but as he says, ‘I’ve no choice but to pay. Newcastle is the only place doing my course.’

Friends Nicola McEwen and Teresa Laidlaw, also of Berwick, and travelling together by train today, say ’It’s ridiculous, but it’s much cheaper to use the car for family outings.’ Both agreed they would prefer to use the train if the prices were more reasonable.

Kate Duncan, Action For Rail, agrees about the madness of it being cheaper to travel by car. ‘Train travel is greener and more sustainable. It’s madness too that our railways make huge profits for German and Dutch railways, money they siphon off to subsidise their domestic operations. It’s about time we had a British state rail run in our interests.’

To join the protest about the fare increase, take action online at www.actionforrail.org.uk