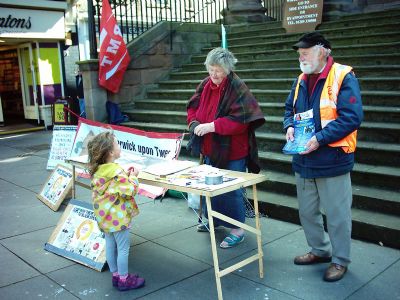 Workers’ Memorial Day is held every year on the 28th April and all over the world workers and unions organise demonstrations, vigils and other events to mark the day and Berwick and Borders Trade Union Council will be taking part. The rallying cry will be “remember the dead but fight for the safety and excellent working conditions for the living.”

Workplace safety is still a huge issue in the UK. Government figures show that 20,000 working people die every year as a result of their work and many campaigners think that the true figure may be twice that. There are estimated to be 1,900,000 people of working age in the UK living with an injury or illness caused or made worse by their jobs. The UK ranks only 20th out of 34 in the Health and Safety Risk Index of the OECD Industrialised Countries and this may in part be the result of a 50% reduction in workplace inspections in the last 10 years as a result of government cuts.

Northumberland and Borders industries such as construction, railways, forestry and agriculture are potentially dangerous environments in which to work. It cannot be disputed that better standards of Health and Safety are found in unionised workplaces and when trade unions and employers work together. This Con/Dem Government has cut funding for the Health and Safety Executive by 35% and Local Councils by 28%. Cuts to services and worksite inspections of the HSE must be resisted by the Trade Union movement – lives depend on it.