“The second volume in the UHI Archaeology Institute’s research series, the book documents a ten-year project that surveyed a 285-hectare area between Skara Brae and Maeshowe.

The project, which ran from 2002 until 2011, revealed a wealth of new sites, as well as helped chart the changing character of the landscape and shed new light on the known monuments and their place in the historic and more recent past.”

If you believe this to be A GOOD THING you can vote for the book …..

Also on the shortlist for these awards is a study of Neolithic dolmens undertaken by Prof Colin Richards of UHI Archaeology Institute and Prof Vicki Cummings of the University of Central Lancaster….. https://archaeologyorkney.com/2022/12/03/dolmen-study-award/

The book which followed on from this study is also a good read – as mentioned here in my tuppenceworth about dolmens….

They work hard for years before presenting information……I just jibber-jabber!

Words of wisdom from Tove Jansson…

“And of course it’s one’s duty to ask one’s relatives to dinner on holidays.’

‘So you don’t like it, really?’ asked the Snork Maiden.

‘Of course not,’ replied the Fillyjonk tiredly and sank down on the table. ‘My uncle and aunt aren’t very nice people.’

Moomintroll and the Snork Maiden sat down beside her.

‘Perhaps they don’t like it either?’ said the Snork Maiden. ‘I suppose you couldn’t ask us who are nice, instead?’

‘What are you saying?’ said the Fillyjonk, surprised.

It was evident that she was thinking hard.  Suddenly the tassel on her cap rose a bit in the air, and the jingle bell gave a merry tinkle.

‘As a matter of fact,’ she said slowly, ‘there’s really no need to ask them as none of us likes it?’

‘And nobody’s hurt if I ask anyone I like? Even if they’re no relatives of mine?’

‘Definitely not’ Moomintroll assured her.

The Fillyjonk beamed with relief. ‘Was it that easy?’  she exclaimed.  ‘Oh, what a relief! Now we’ll celebrate the first happy Midsummer I’ve ever had, and how we shall celebrate!  Please, let’s have something really exciting!!

I received this from ‘Wild Justice’……. https://wildjustice.org.uk/

“We write to Defra about gamebirds and avian flu

This summer has seen unprecedented levels of highly pathogenic avian flu in wild birds in the UK (and elsewhere). In recent years, this has been a winter disease, reaching the UK each autumn as migratory birds arrive but dying out in the warmer summer months. This year the deaths of wild birds have been much greater with many seabird species (eg Gannet and Great Skua) being seriously affected at their breeding colonies.

Much concern was expressed by a range of conservation bodies about the impacts of releasing captive-bred gamebirds (essentially Pheasants and Red-legged Partridges) into the countryside in very large numbers in late summer for the shooting industry. Might the captive-bred birds bring the virus with them, or might they create another large reservoir of the virus so that it was more difficult for the disease to peter out?

Defra decided that it wasn’t going to introduce any restrictions on gamebird releases at all – click here. There have been many more cases of bird flu in gamebirds this year, already, than in previous years – click here.

Having let the genie out of the bottle, or opened Pandora’s box, Defra will have to live with the consequences. But they face another dilemma now, completely of their own making.

Although many millions of gamebirds are imported into the UK from continental Europe each year (as eggs or chicks or sometimes as poults), some of the breeding stock comprises released gamebirds that have survived the shooting season and are caught up and taken back into captivity. This is part of the Schrodinger’s Pheasant (or Red-legged Partridge) paradox to which we have drawn attention in the past. Gamebirds can flip between being livestock and wild birds several times in their lives – mainly to suit the preferences of the shooting industry. 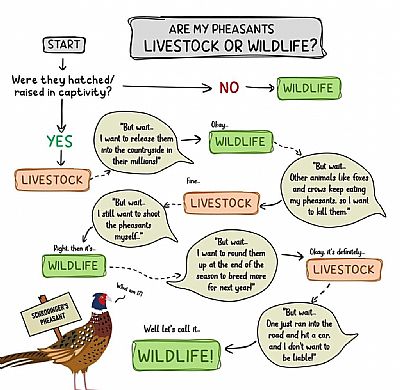 We are approaching the time when catching up happens – late December through to the end of the shooting season at the end of January. Is Defra happy to allow catching up (of gamebirds which may well have been infected with the avian flu virus) in a time of widespread avian flu outbreaks among commercial poultry farms, and strict restrictions which apply to commercial poultry industry? Or is Defra going to prevent catching up this year? Again, it’s a difficult call – but the difficulty was entirely predictable and is a consequence of ignoring a great deal of advice that gamebirds should not be released. Our guess will be that Defra will not impose any restrictions on the shooting industry – that’s so often the case.

Wild Justice wrote to Defra last week asking them what they are going to do. Maybe they haven’t given it any thought until now because we haven’t had a response yet.

Here’s our letter – we’ll tell you whether we get a reply.