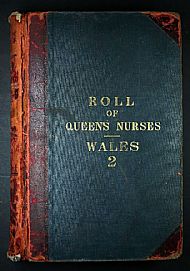 Building on David Michael’s May 2020 essay 'When all this is over', it seemed an appropriate time to pay tribute to the predecessors of today’s heroic health professionals. The records released by the Wellcome Library of the UK & Ireland Queen’s Nursing Institute Roll (and, to a much lesser extent, the UK Midwives Roll and the Nursing Registers) give an insight into the lives and work of many thousands of women who served communities in this way before the advent of the National Health Service.

As far as Neath is concerned some passed through within a matter of weeks, while others gave diligent service here over many years. Not all were 'Queen’s Nurses'. Interestingly, a name which appears in all three of the above-named registers was Margaret Alice Bushell who qualified as a Queen’s Nurse in 1903 and initially lived at 116 Briton Ferry Road when she arrived at Neath around 1906.[1] She was among the first residents at the QNI Home before leaving in 1912 to take up a post as a school nurse employed by Glamorgan County Council.[2]  After several years spent working in her native Pembrokeshire, Margaret returned to the Home at Neath in 1926, again in the role of midwife.[3]  She possessed those two prized qualities of a nurse in Wales - she was Welsh-speaking and a cyclist!

It goes without saying that Margaret (like many nurses generally during this period) was unmarried. The QNI official record stated unequivocally 'Single or Widow' since upon marriage a nurse was obliged to resign her QNI status.  They were, however, permitted to re-join the Institute having been widowed.

An unexpected link with David’s article emerged during research.  One of our early Queen’s Nurses, Sarah Mary Jenkins of Bridgend, arrived in Neath in July 1900 and spent more than five years in the town ministering to the local population before leaving in September 1905 for Huddersfield, where she was to become Senior Nurse.  Her tenure was to be very brief, as Nurse Jenkins surrendered her badge and brassard[a] to the Queen’s Nurses’ Institute in December of that same year, as her health had 'given way'.[4]  Did she return to nursing after a period of rest and recovery, I wondered? Well, apparently not; for well within a year of her departure from Neath she returned, but this time as the bride of Dr John Mudie Morris, who was for many years the town’s Medical Officer of Health (MOH).[5]  Their first marital home was 100 Briton Ferry Road, before moving to 'Plasnewydd' in London Road (a substantial residence where Dr Edward Coyne and partners later practised).  By 1939 the Register lists them as settled at 'Gnoll Cottage'. 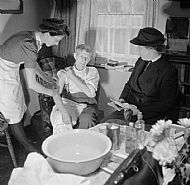 Several girls from Neath were appointed Queen’s Nurses: Catherine Evans, a product of Gnoll School, worked in the town between April 1925 and June 1926 before moving to England, later returning to take up 'holiday work' in Gowerton and Llansamlet; Gnoll and County schoolgirl Blodwen Morgan spent her career in North Wales in the 1920s, before resigning to marry; and farmer’s daughter Jessie Trew, educated at Bryncoch National School, was deemed 'exceptionally capable' in her work at both Cardiff and Penmaenmawr before marrying in 1941.

Nursing at Cymla Tuberculosis Hospital, meanwhile, was part of the early training for Martha Russell from October 1914 to March 1915 before gaining admittance to the QNI the following year and working throughout the 1920s at Pontardawe and Resolven.

Another who spent a short time at Neath in the Summer of 1916 was Meirion Evans. She left for military work, serving in stationary hospitals in Salonica and Constantinople and a casualty clearing station in Russia. It was little wonder that she could not settle to district work after these experienes. Following demobilisation in February 1920 she worked at the Ministry of Pensions.

Meirion was far from being the only nurse to suffer early burnout (it was not unknown even among those who remained in Britain). Another casualty was Margaretta Edwards. Having worked previously in Gower and Aberystwyth and described on her record as 'a capital nurse, keen and thoroughly reliable', Margaretta spent fifteen months in Neath before leaving in March 1924 due to ill-health.  She returned home to Trapp, Llandeilo, where she died three months later, aged 31.

Having spent almost three and a half years in Neath as both nurse and Health Visitor, Annie Richards (following departure for Cambridge in June 1915) later offered herself for military nursing, serving in Baghdad and Basra (1918-21). 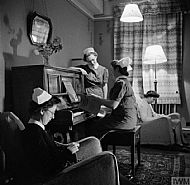 Upon being appointed a Queen’s Nurse and midwife, young Edith Williams spent several months of 1922 in Neath. Her record was excellent, except for the statement that there was 'trouble about rash on babies'. The MOH advised resignation, but it did not seem to be her fault.   Whether that was her reason for leaving is unclear, but she moved to Guildford for a short period, then to Llanrwst before marrying in 1925.

It is impossible in a short article, to do justice to so many.  Looking back a century and more it is worth reminding ourselves of the sheer physical effort of cycling to and from patients’ homes in all weathers, nurses’ exposure to diseases for which remedies were less reliable or available and the strict constraints under which they were expected to live as members of the Queen’s Nursing Institute.

The many volumes of records of that body lay bare the scrutiny to which each nurse was subjected throughout her career.[6]  It was entirely reasonable that her work and medical equipment should undergo inspection every six months, but the local nursing association also saw fit to dissect all aspects of a nurse’s character, their remarks lying indelibly until her career’s end and beyond. Very few of the comments which follow apply to nurses who served in Neath, but they give a flavour of what was endured. 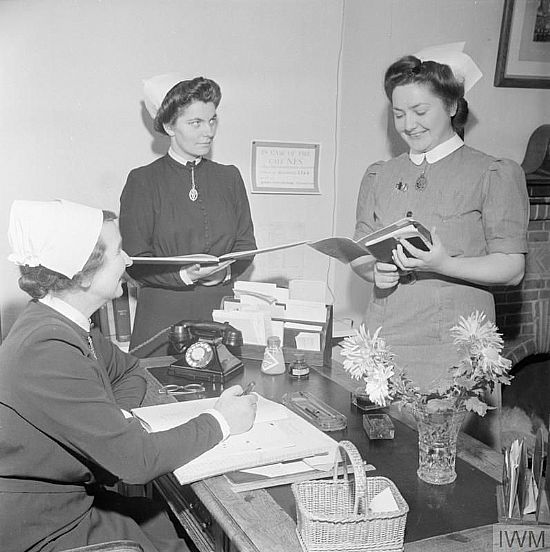 Reports on nursing itself covered a spectrum ranging from 'conscientious, methodical, attentive, energetic' to 'satisfactory, acceptable' and then take a downward turn toward 'irresponsible, slapdash … a muddler lacking in method and gumption … a third-rate nurse, poorly educated.'

Also noted were an individual’s relationship with patients, whose opinions were canvassed (generally nurses were 'well liked' or even 'loved') along with her colleagues at the Home, where harmony was deemed crucial.  Again, some comments were very complimentary: 'irreproachable, amiable, refined and neat in appearance'; some less so: 'giddy, lacks dignity and discretion, always getting into scrapes … a mischief-maker, talkative and disloyal … harum scarum – troublesome about uniform and regulations … too keen about off-duty time, regardless of work … a peculiar woman with a curious disposition … not very strong, but improving since teeth overhauled' [what dentistry was this one wonders!].  In one case complaints led to a nurse being removed from the QNI Roll 'after later information'. And, of course, the cardinal sin: 'It was found that she had a child soon after marriage. She is not to be allowed to join.'

Clashes of personality in a Home could have serious consequences. We do not know how 'friction over a second-hand car' ended, but one situation reached such a pitch that it resulted in two resignations,   that of the senior nurse and her junior colleague, who 'could not get on.'  Inevitably this caused staff shortages, putting further strain on the remaining nurses until replacements could be found.

We can be very grateful to these women, whose actions undoubtedly saved many lives (perhaps those of some of our ancestors). There can be no doubt that sacrifice, of one sort or another, has always been a strong element of a nurse’s calling.

The table below, includes those who spent a minimum of one year in Neath during the period covered by the Queen’s Nursing Institute Roll (Wales) - Volumes 1 & 2. The third column records the immediate reason why each nurse left her post, if stated. 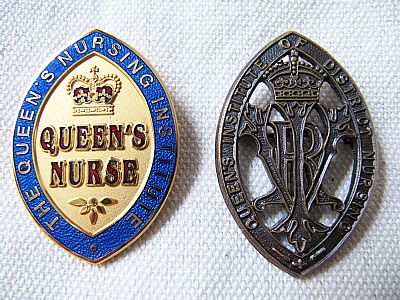 [This article is a supplement to a longer article that will appear in The Neath Antiquarian Vol.4 which will celebrate the centenary of the NAS in 2023]

[a] A brassard or armlet is an armband or piece of cloth or other material worn around the upper arm; the term typically refers to an item of uniform worn as part of military uniform or by police or other uniformed persons.