The Federation funds delegates to the committees responsible for monitoring professional performance and maintaining the Dental Performers List, and also a delegate to the Local Dental Network. 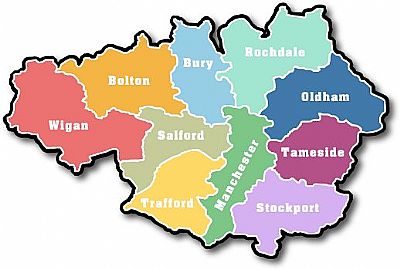 There are 10 local authorities within Greater Manchester and 7 LDCs, although borders are co-terminus two LDCs cover two local authority areas each; one LDC also covers a small part of Derbyshire which is without the political border of GM but included in the Health Service one.  The map above shows the local authority areas and that below the former PCT areas. 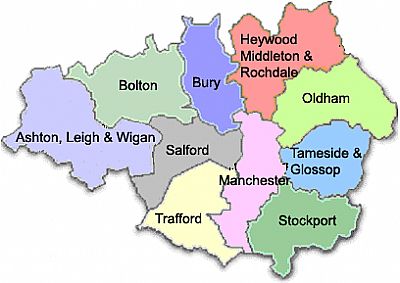 The Federation holds several meetings per year, attended by officers from the constituent LDCs.  We also hold meetings open to all members of the profession; currently these are suspended due to Covid.

All dentists in each LDC area under a GDS contract  pay a small percentage of their contract value as a subscription to their LDC, these in turn subscribe to the Federation.  Many PDS and private practitioners also choose to contribute voluntarily.

The Federation has three officers, Stuart Allan who acts as Chair, Jim Rochford acting as Secretary and Jon Slattery who acts as Treasurer.  Stuart can be reached on stu.allan@dsl.pipex.com

As the Federation has no individual members dental practitioners cannot actually join, your local LDC would no doubt welcome your interest.  Contact details appear on the “Contacts” page (under construction).

The Federation has observer status at the National LDC Conference and is represented at the LDC/GDPC liaison group.