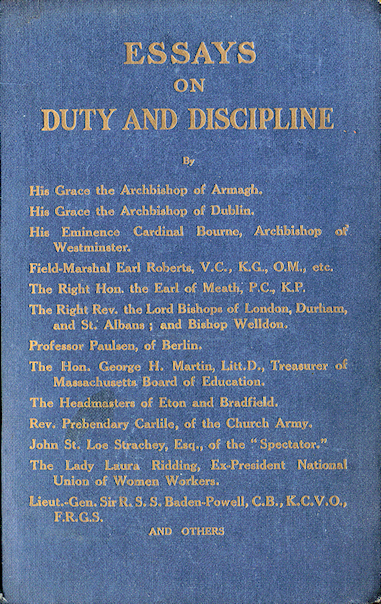 In 1910, a small book was published, the first of four, containing ten Essays written by "Public Figures", effectively deploring the state of "Youth today".  One such essay (No. 32, in the last Volume) was written by Robert Baden-Powell, then in the process of creating the Scout Movement.  It has to be said, his essay is not particularly brilliant; but his mind was perhaps on other things.

But there are three points about these Essays:-

1.  How much it seems that the "youth of today" was bemoaned by so many in high positions - and is not the same true today, a century later ?

2.  How much it seems those "problems" were crying out for a "simple solution" - and - now, with hindsight - how that solution, then and now, is provided to entire satisfaction, by the Boy Scout Movement; and

3.  How ironic it seems now that so many of those lads thought to lack "duty and discipline" proved that they did indeed have those attributes, by being sacrificed in the impending Great War, which started the same year that the final(?) version of these Essays was published.

There are 40 Essays here; we suggest you don't try to "swallow" them all at once; probably better to read one, digest it for a day, then read the next.

Your comments are invited.  Feel free to add them through the "Contact Us" tab on the left of your screen.  e-mail addresses will NOT be shown.  If you are referring to a particular Essay, make sure you give its Number so that other readers can follow you.

The essays were originally published in four volumes of ten essays each, and later in a single volume.  Restrictions on this (FREE!) WebSite mean that it is more convenient to split the complete work into eight parts of five Essays each, with extras for "top and tail".

For convenience, each block of five Essays is colour-coded, with the first, third and fifth in black, the second in burgundy and the fourth in green.

This is in text-only form, which is easier to do and provides smaller files.  Please notify us of any typographical errors - better still, send us the corrections so that we can just paste them in  ;-)

On any page, the links below the text and to the right of your screen are Advertisements, and clicking on one of them will take you away from here to their WebSite.