Many thanks to volunteer Paul Taylor for supplying photographs

The Walled Garden was built between 1783 and 1788 and it is more likely than not that the Head Gardener’s Cottage and Large Conservatory were built at the same time. They are both fine examples of Gothic Architecture with windows with pointed arches. The term Cottage is really a misnomer as this house has a kitchen and two large reception rooms on the ground floor and three large bedrooms and two smaller rooms (now a lavatory and bathroom) on the first floor. It also has a large cellar and outhouses in its yard.

The size of the house clearly indicates the status of the Head Gardener. He was responsible for a staff of approximately ten men who had to maintain not only the Walled Kitchen Garden, Glasshouses and Conservatories, but also the formal gardens, sometimes referred to as the Pleasure Gardens, at the rear of the Hall and the Camelia House and the gardens adjoining the Stables. We do not know who the first occupant of the Cottage was, but we do know that in 1856 when Fyfe wrote his Rambles Round Nottingham, he referred to being shown “the celebrated Kitchen Gardens” then “under the able management of Mr. Haythom, senior, who has, for upwards of fifty years, been gardener at Wollaton”, so he may perhaps have been the second occupier of the Cottage. He is shown in the 1841 census as Head Gardener living there with his wife, they both being aged 50 with their six children, his two sons being described also as gardeners. There does however appear to be an error as to their ages, not apparently uncommon in the 1841 census, because in the 1851 census he is now 68 and she 67! One of the sons, George, seems to be his deputy and is referred to by Fyfe as, “Mr. Haythom, junior, a most intelligent and rising horticulturist.” By 1861 the new Head Gardener is Henry Gadd aged 37 living there with his wife, his sister and two small children. Mr Gadd was to preside over the period when the Garden reached its high point with Freda Parkes outside the Cottage in the 1920s.

The fine tracery of the Gothic windows in the Cottage:

These glasshouses and the Conservatory were filled with an enormous variety of exotic plants, valued in 1867 at £997, the equivalent of £200,000 at today’s prices. He is still Head Gardener in 1876 when the Garden was visited by a reporter from The Journal of Horticulture who was greatly impressed by his work and was told of his achievement in having recently grown a cucumber “to 7 feet”. The one in this photograph is not quite as big!

In the 1881 census he is now described as “market gardener employing 6 men”. It probably indicates that in the absence of the then Lord Middleton, who was mainly resident in Birdsall, the produce from the gardens was then being sold on the open market. This would also explain why his successor Charles Mee is described in the 1891 census as “florist and fruiterer”. He has a son and two daughters and, indicative of his status, a 16 year old “domestic servant-general”, living-in, in the Cottage.

He has gone by 1901 when George McLean, 52, is living here and is described as “market gardener”. He came from Staffordshire and is living here with his wife, three daughters and two sons. The daughters aged between 16 and 21 were working as bookkeeper and cashier, perhaps for the business. We have a photograph of him and his family in the garden of the cottage.

A successful crop of potatoes: 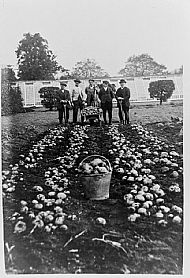 In 1903 Frederick Parkes takes over from him and will remain as Head Gardener for 38 years even after the Estate is sold in 1925. He had considerable experience having worked throughout the country, including Sandringham. He was 32 when he and his wife Rose and daughter Violet (4) moved into the Cottage.

They subsequently had two further children who died in infancy and Freda who was born in 1912. It is she who features in several of his photographs. It was this interest in photography which has provided us with an amazing record of the whole Walled Garden Complex. At this time domestic buildings and outdoor staff were seldom photographed, but he has left us with a large collection of both.

A few of the volunteers now working in the walled garden:

His granddaughter Celia also has his dinning table and bureau which she has kindly agreed to donate in due course, to the Council, in the hopeful expectation that the Cottage might become a museum. In the 1930s he and his wife moved into a flat in the Stable Block and when he retired in 1941, from his then position of Superintendent, they moved to a house in Lenton Abbey where he remained until he died in 1952. His photographs have been widely published and remain his lasting memorial.

2014 - showing deterioration of the walls: 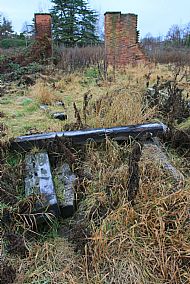 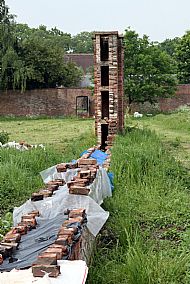 Once the debris is cleared the heated wall system can clearly be seen. This enabled soft fruit to be grown against the heated walls which would otherwise not survive.

After many hours of work by the volunteers, the professional team can use the bricks to repair walls, and replace the mortar with a mix the same as would have originally been used.

Every garden has a cat!