In Memory of our Beautiful Boy Blaze (Talraz Heartsong)

Talraz Heartsong ("Blaze")  was the baby of the family and adored by all the girls.

Blaze stayed here almost by accident as he nearly went elsewhere on more than one occasion.  Being a handsome boy he was often on the shortlist when our potential puppy owners came to visit, but he had a little "if only", which as so often happens did eventually rectify itself.  By that time of course, he was beginning to get his feet under the table!  So despite being officially still available to the right home, it looked very much as if his "right home" was here with us at Crambe.  His puppy nickname became his permanent name so Blaze he remained, despite the hankering for something which sounded more like a Beardie and less like a horse.....

These last few photos of Blaze were taken less than a fortnight before he died, and show him enjoying the Puppy Farewell Party at the Glebe.  He loved his puppies, and they clearly loved him too! Do his eyes seem to hold a little sadness, or is that too fanciful? 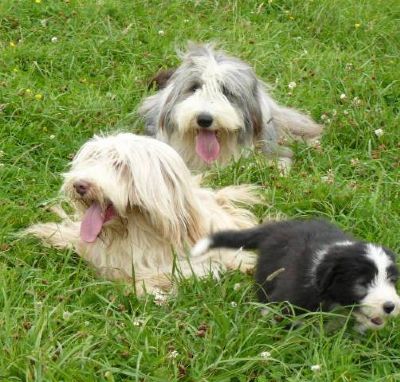 Who would ever guess that in under a fortnight this vibrant, handsome young lad, who had so much potential in every way, would suddenly begin struggling to breathe and be lost to us within less than 48 hours?

We are stunned at the meaningless tragedy of Blaze's early demise.  Life certainly can be cruel at times.

But thanks to dear generous Ruby, and our little Miss "Hot Pants" Honey, we have fifteen puppies from two wonderful litters to remember him by - and will always smile at the many happy memories from this summer, so filled with puppy love