‘In the belief that many features of the traditional accounts of the character and career of Richard III are neither supported by sufficient evidence nor reasonably tenable, the Society aims to promote in every possible way research into the life and times of Richard III, and to secure a reassessment of the material relating to this period, and of the role in English history of this monarch.’

Since his death at the Battle of Bosworth on 22nd August 1485 Richard III has engendered a great deal of discussion and controversy with regard to his character and reputation. Why does a medieval King who ruled for just over two years still manage to create so much fierce debate? What inspires people to join a Society dedicated to a much maligned and misunderstood monarch?

The answer to the first question is that for many years Richard has been portrayed as a scheming villain who usurped the throne from his nephew and would go to any lengths to achieve his ambitions. This view stems from the writings of early Tudor historians and was reinforced by William Shakespeare's play, which has probably influenced most people's perceptions of Richard.

In the intervening years, however, there has been a renewed interest in reassessing Richard's life and reputation and, although there are still people who continue to follow the traditional view, great strides have been taken in understanding his motives and his character. This has been achieved by intensive factual research and re-evaluation of the contemporary evidence contained in the15th century documents that survive from Richard's reign.

So why do people join the Richard III Society? Because they have one common aim: To attempt to redress the damage done to Richard's reputation by a combination of Tudor propaganda, unsupported facts and character assassination that have continually overshadowed his short reign.

Link to the main website of the Richard III Society:

Coat of Arms of Richard III 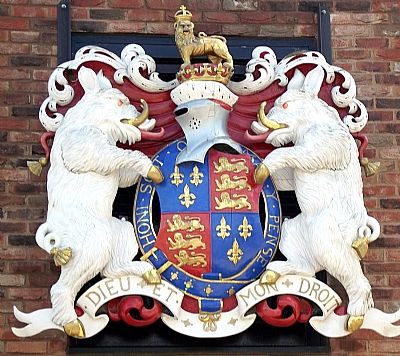