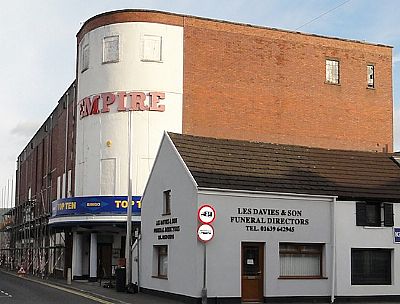 A last look at the Empire Neath - June 2012
note the scaffolding going up for its demolition.
It may be rather appropriate that funeral directors
are close by!

Going back in time 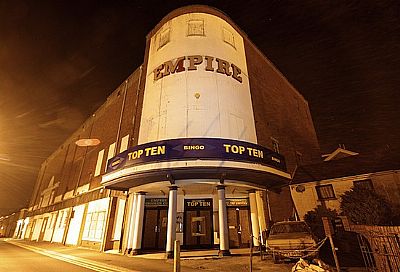 At night time - taken from an usual angle.   Note that the Vauxhall Viva is rooted to the spot.

Bought by the Coastal Housing Group in 2011 to demolish and be replaced by 12 flats for social housing.

The website highlights the years 1926-1959 when it was Neath's favourite cinema, having over 6million visits by cinema goers.  The days before television became popular home entertainment.

The website is dedicated to Bryn Symmons, Chief Projectionist and House Engineer (1943-1957) and his daughter, Sylvia.

The cinema interior after its refurbishment in 1936
Photograph published in the Neath Guardian, October 1936
The seating capacity was then 1,300

The Empire was the only cinema in Neath
to have a Christie Cinema Organ (installed in 1931).
Seated at the console is Bryn Symmons
This is the original black and white photograph
a coloured version appears on CHRISTIE ORGAN (Menu)

A later photograph when it became a Bingo Hall
and before a fire in 1974 when the ceiling was replaced
see BINGO in Menu.

An aerial photograph of the Neath Empire,
note that it is in a densely populated area
and would have made an ideal community centre.

History of the Empire

Disclaimer
No responsibility is accepted for the advertisements put on by the hosting service, which are not endorsed in any way whatsover.

All information is put on in good faith and no responsibility is accepted for any errors or omissions that may occur.