The School coaching programme for 2017 is as follows:-

This Partnership with the School is now in its 11th year and becoming one of the Club's main activities which creates a new environment for the children, who hopefully will return to the sport in their early or later years. 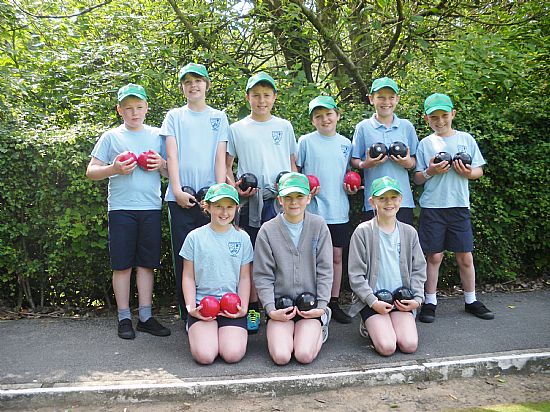 Edgworth Bowling Club are proud to be in partnership with the School. The teaching staff could not have been more helpful in the involvement of the children when they have visited the Bowling Green for their sports sessions. 2017 will be the tenth year of this most enjoyable partnership. All the bowling club volunteers have attended the relevant courses and received the certifications necessary for their involvement with children, including Criminal Records Clearance certificates; and as bowling is a no contact sport the club's Sports Coordinator has every confidence that the children are in a safe and happy environment.

The children's activities are on Friday afternoons from 1.30 pm and the first session involves playing several different fun games involving bowls. This teaches the children about the bias on the bowls influenced by the crown (slope) of the Green, and how to correctly deliver a bowl from the hand to the target.

The rest of the sessions the children are taught the basic rules of the game where they compete in pairs against each other. These sessions teach the children how to enjoy competition, how to score, how to measure, and some of the etiquette and correct behaviour when on the Green. The children have always responded in a positive way and have been a credit to the school and their parents/carers. The ratio of Volunteers to children is 1 Volunteer to 4 children and all are overseen by the Coordinator.

1  Explain the bias of the Bowls and Jack

3  Explain the Green and effect of its Crown

5  Explain stance on Footer or Mat

1  Practice bowling a length with Jack

2  Practice bowling a length with Jack and  bowl, adjusting size of bowl if necessary.

4  Practice bowling bias on different parts of green to see the reaction of the bias.

1  Explanation and demonstration of basic rules and card marking

2  Bowling round the green clockwise and anti-clockwise to gain a better understanding of the bias.

3  Match play using all the information and rules learned so far.

1  How to get the best from control practice sessions by playing a length with the first bowl and adjusting the length, bias or both for the second shot.

3  Playing with weight or firing a bowl, explain what the difference is.

2  Demonstration and practice playing into corners for younger pupils or corner to corner for older players.

1  Explanation of league play, the structure of how it works ie. Home and Away matches.

2  Game play and presentation of Certificates.

The green is now open for members only pre-booked bowling sessions. 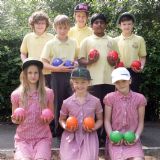