Welcome to Club Film,
the independent film society based at  Sabhal Mòr Ostaig on the Isle of Skye.

Club Film has been rather dormant in 2013.
We plan to work more closely with SEALL ~ Skye events for all ~ in  programming and marketing. www.seall.co.uk where you will find our next film listings.

With Club Film you can experience the cream of current 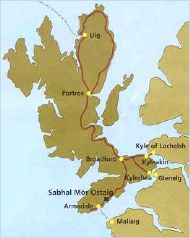 international films on the big screen (and we mean big - 6 metres wide), through either our cinema quality digitial projector, or our 35 mm projection system, with Dolby Sound-surround.