Each of the loops have been given a name and colour to try and make it easier to follow your course both on the map and on the day.

A map of the course is downloadable under ride information. An A3 copy will be sent out with your ride details.

Total Distance 24.3km, one gate to be tied open on day

Total Distance 15.8km, one gate to be tied open on day

ALL gates are designed for equestrians so easy to open.

These commons form one of the largest remaining lowland heathsin the UK, in excess of 2800 acres, managed by the East Devon Pebblebeds Trust. It is recognised as an Area of Outstanding Natural Beauty, Site of Special Scientific Interest, Special Protection Area and a Special Area of Conservation. Public access was granted in 1930 by the 21st Baron Clinton. From the highest areas the views stretch for miles in good weather, all the way to the sea at Exmouth.

The Woodbury loop passes by Woodbury Castle, the remains of a pre-historic hill fort built 500-300 BC. It is a Scheduled Ancient Monument comprising of a series of ramparts and ditches. Remains of a WWII Royal Marine camp is to be seen on East Budleigh Common. A WWII tented camp was based near the car park at Joneys Cross (Checkpoint 5), where US Marine troops were based temporarily to practice for the D-Day landing on Omaha beach.

The heaths lie on ancient geological formations (pebblebeds) consisting of rounded quartzite pebbles and sand. On top of this is poor, acidic soil with low level vegetation interspersed with areas of trees. The unique heathland has a diverse flora, including the Bee Orchid and in wet areas insect-eating plants called Pale Butterwort and Sundew. There are also unique fauna, being a breeding ground for Curlew, Yellowhammer, Dartford Warbler and Nightjar. In the summer there are more than 30 species of butterflies such as silver-washed fritillary, brimstone, grayling, and silver-studded blue. Reptiles are also found on the heaths, such as Adders and the Common Lizard. 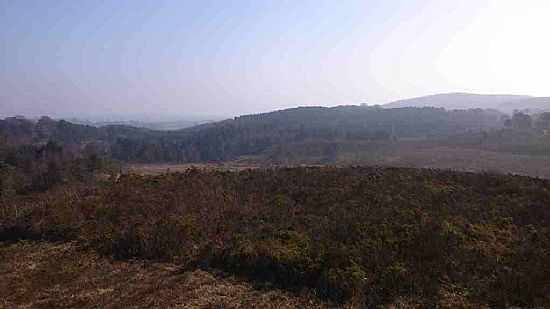