The Pennants owned sugar plantations in Jamaica for nearly 300 years, from the late 1650s up until 1940. This corresponds very closely with British colonisation of the island, which lasted from 1655 to Jamaican independence in 1962. They bought and sold land as opportunity arose but at their height, the family owned six sugar plantations and three pens (for rearing livestock).

From the 1730s, the Pennants were absentee landowners, as they, like many wealthy planters, returned to live in Britain. They left the day-to-day management of their Jamaican estates in the hands of agents, who were themselves owners of sugar plantations on the island. Despite living over 4,600 miles away, the Pennants controlled their Jamaican holdings diligently, writing many letters to their agents concerning the management of their estates.

The themes of these letters were relevant to all planters on Jamaica. These include the influence of weather and terrain on sugar production, the impact on the island of the American Revolution (War of Independence) and of slave rebellions, matters associated with the import and export of goods and those concerning legislature, and the management of enslaved workers. The Pennant plantations, therefore, are almost a microcosm of British Jamaica, and an exploration of their records provides valuable insight into this important but painful part of British history.

Where were the Pennants' plantations? 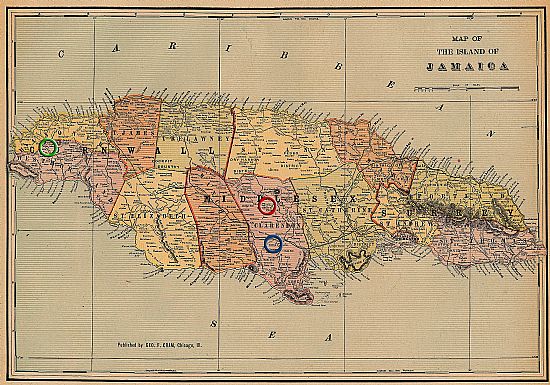 Most of the Pennant plantations were in the parish of Clarendon, in the centre of the island (within the red and blue circles on the map). One, King's Valley, was in Westmoreland, to the far west (green circle).

Within the blue circle are Bullard's pen, Coates pen, Denbigh plantation and Main Savanna pen. In the red are the plantations of Cave River, Kupuis (pronounced 'cue-pits'), Pennants and Thomas River.

How productive were the Pennants' plantations?

Not all West Indies planters made fortunes but many - including the Pennants - did.

The amount of sugar produced was dependent upon several factors, including the weather. Crops could be wiped out in moments during a bad hurricane. Despite this, the Pennants' plantations were usually highly productive and profitable.

1775 was clearly a good year, as the agent confirms that he had shipped 1,000 hogsheads. Keen to maintain high productivity, that year the Pennants bought 12 new slaves for Denbigh, 12 for Kupuis, 10 for Bullards and 15 for Coates.