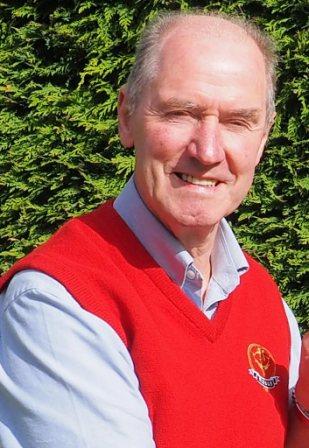 It is amazing at how quickly the past 2 years have passed and I now find that my 2 yard of office as Captain of the society have been completed.It has been an honour to have held the post and I have really enjoyed visiting all the Clubs, assisting the Reps, when required and carrying out all the official duties. It is most encouraging that the membership of the society is increasing each year 10 new members joining last year bringing our total membership to 182 .

Looking back over the past 2 years I realise that they have been a complete contrast. Last summer we played practically all of the fixtures under blue skies and blazing sun which attracted large entries resulting in an excellent financial return which meant that a total sum of 2,500 pounds was distributed to 5 local charities. This year got off to a bad start with the Royal Dornoch fixture cancelled due to bad weather.This was followed by the Invergordon fixture in July and the Strathpeffer fixture in August both cancelled due to bad weather. Apart from denying members the opportunity to play the courses, it was a financial loss to the society but more importantly a financial loss to the clubs which they can ill afford. In spite of this downturn our Treasurer ,Steven Lloyd was able to release 2,000 pounds for Charitable causes. As it is the duty of the Captain to arrange the distribution of this money I intend to award 4 deserving charities ( yet to be selected ) each the sum of 500 pounds.

The Tri Counties Trophy was won this year by Ross-Shire who were pushed all the way by Sutherland who finished 1 point behind. The 3 Counties involved are appreciative of the lovely Cladach Quiach Trophy presented by past Captain Robert Beaton for annual competition between the 3 Counties.

I should like to finish by thanking Club Reps for all their work during the year in organising and running the fixtures. The success of the Society depends heavily on the work and the commitment by its Treasurer and Secretary. Steven Lloyd has done sterling work controlling the “ purse strings “ and Secretary Michael Mackay deserves our thanks for the excellent work undertaken by him over the past 6 years , his efficiency and attention to detail has ensured the smooth running of the Society. Michael is now standing down as Secretary .

I wish the Society and the new Captain best wishes for a successful future.