River Neath (Welsh: Afon Nedd) is a river in south Wales running south west from its source in the Brecon Beacons National Park to its mouth at Baglan Bay below Briton Ferry on the east side of Swansea Bay.

Several minor rivers rise on the southern slopes of Fforest Fawr. These include the Afon Hepste, Afon Sychryd, Afon Pyrddin, Nedd Fechan and Afon Mellte, the latter two converging at Pontneddfechan to form the River Neath. Upstream from these confluences is the area known as Waterfall Country (Welsh: Coed y Rhaeadr), where the rivers plunge over a series of spectacular cataracts.

The river flows through the Vale of Neath, a long straight valley developed along the Neath Disturbance and which carried a major glacier during the 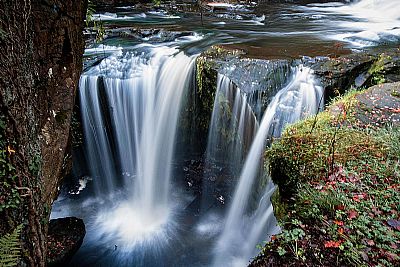 ice ages. Downstream of Pontneddfechan the river has few significant tributaries. Those that do join include the Melincwrt Brook and the Clydach Brook. The only major tributary to join is the River Dulais which has its source north of Seven Sisters. As the Dulais nears the Neath it descends a spectacular waterfall: the Dulais Falls (right), a popular tourist attraction owned and managed by the National Trust and the site of old iron workings. Close by the river flows past the once grand estate of Ynysygerwn. A smaller tributary, the River Clydach, flows southward through the village of Bryncoch to join the Neath in Neath town centre. 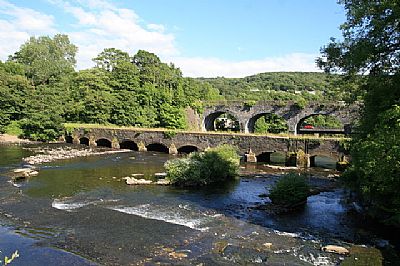 crossing the River Neath with a fine aqueduct (left). Also crossing the river here is the Vale of Neath Railway line and the A465 road. As it approaches the town of Neath the river passes the ancient church of Saint Illtud at Llantwit. Further on it loops around the former workhouse at Llety Nedd and skirts Penydre. Here it passes close to the Norman castle (right - below), visited by King Henry II, King John and King Edward I. 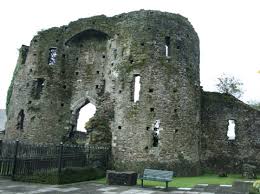 As it meanders around the town of Neath it passes the remains of the Roman fort Nidum at Court Herbert and the Cistercianabbey of Neath Abbey (below). Here the monks of the Middle Ages used their access to the river to challenge the trading rights of the burgesses of the town of Neath.

Briton Ferry where the M4 Motorway crosses the river.  Where the river meets the sea there is the Jersey Marine Beach, which is little used by the public.

The estuary is partly industrialised with a ship breaking yard in the area known as Giants Grave, an appropriate name where giant 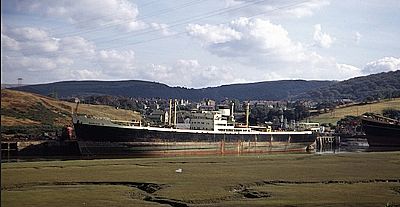 ships are broken up.  On the opposite side and near Neath Abbey there are  undisturbed areas of salt marsh stretching from Neath to Baglan Bay and Crymlyn Burrows which are of great ecological value.

The Neath River Swing Bridge  is a Swing bridge over the River Neath, in Wales. It carried the former Rhondda and Swansea Bay Railway near 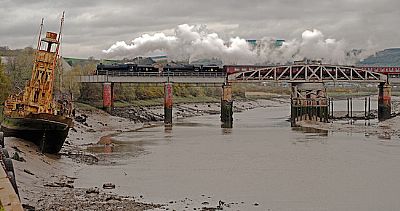 Skewen. The bridge was constructed as a result of the Rhondda and Swansea Bay Railway Act of 1892, which aimed to provide access along the length of the river from wharves and jetties down past Briton Ferry.

The River Neath Bridge has three steel approach spans on the west side and two on the east. They are of plate girder construction, and of through type, supported on piers that each consists of a pair of cylindrical columns, either of wrought iron or steel plate, which are connected by horizontal and cross bracing. The total length of the bridge is 388 feet (118 m).

The 180-foot-long opening span (55 m) is pivoted centrally on a pier of six cylindrical columns similar to those that form the piers to the approach spans, but placed in a ring. They are capped by a large cylindrical drum that contains the supporting rails and the operating mechanism. The swinging span is 27 ft wide (8.2 m)

After many years of decline, however, the swing-bridge facility was hardly ever used. In total, it was used 14 times in 1947, three times in 1948, only once in 1949, and once again in 1956. The last operation was only for testing purposes, at the request of the Neath harbour commissioners. In recent times, the bridge suffered vandalism. A serious fire destroyed its dynamos and pumps, evidence of which is still visible in the steelwork.

On 19 March 1985, the British Railways Board proposed to cease operating the swing-bridge over the River Neath, a move that was considered controversial in South Wales. The Board believed that maintaining the fiction of a swing-bridge presented BR with a cost that is no longer justified.

Despite the bridge welded shut to permanently lock it, and much of the original R&SB railway route now closed, the section incorporating the Neath crossing still exists, now forming part of a diversionary goods and passenger traffic route over the Swansea District Line.

River Dulais joins the River Neath at Aberdulais after flowing through the Dualis Valley.  The Dulais Rock waterfall can be viewed from thw Aberdulais National Trust site and is really a spectacular sight.

All news items are produced in good faith and credit is given to the source.