NEATH, THE PUB AND THE FRIENDLY SOCIETY 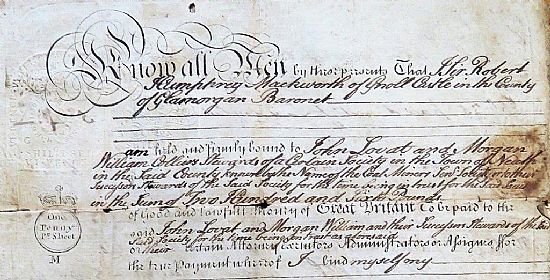 Without access to banks and building societies and before the modern welfare state, how did working people of Neath guard against ill-health and accidents and avoid the indignity of the Workhouse and a pauper burial? The answer is that they set up their own benefit clubs and friendly societies to provide self-insurance. Extraordinary as it may seem to us now, those clubs and societies met in the many public houses of the town.

Previous generations might have received parish benefit at home but, after the reform of the Poor Law in 1834, the likely outcome for the sick or injured at work was destitution, loss of home, break up of family and, ultimately, admission to the workhouse with everything that entailed.

The central financial function of the friendly society was simplicity itself; the members paid a subscription to the society while they were working, on the basis that, if they were unable to work in the future through sickness or unemployment, then, in return, the society would pay them a weekly benefit by way of relief.

In the early years of friendly society development, the whole thing centred on a box.  Money received in subscriptions was deposited in the box and drawn out as necessary to pay benefit; the societies were known as 'box clubs' and when a member received that benefit he was said to be 'on the box'. It was box clubs like the Britannia Friendly Society of the Bull public house in Water Street that the mining overman Jeffery Jeffries was referring to when he told the Children’s Employment Commission in 1842-

‘Most of the men subscribe to a benefit society held at the Bull in Neath, and when an accident occurs they are allowed about 7s a week.  I subscribe to the society myself; there are about 140 members’.

Not all assets were held in ready cash.  Before the development of the local banking system some societies deposited money with the Gnoll Estate. From 1775 to 1781, ten societies lodged sums of money with the Gnoll estate ranging from £20 up to £200.   In the years 1793-97, the estate took deposits of £100 a time at 4 per cent interest from the Amiable Society of Women, the Black Cock, Coal Miners and White Hart societies, the Young Bucks and Faithful Friends, all secured by bonds.  Sometimes these investments ran on for decades. Copies of the bonds are held in the Neath Antiquarian Society archive at the Neath Mechanics' Institute under reference numbers NAS Gn/E 20/25-30 and the investments are recorded in the Gnoll Estate accounts. Later in the 19th century the societies lodged money with the banking system, granted loans backed by mortgages and even acquired property themselves.

Throughout the period societies continue to meet in public houses and, in the early days, members were required by club rules to contribute toward the purchase of beer which would be drunk on club nights. One of the earlier clubs, the True Nelsons, required members to pay 10 pence to the box and two pence to the club which would have paid for beer. The clubs may have had free use of clubrooms but were expected to reimburse the landlord in 'wet rent', that is, by the purchase of a certain amount of beer. Although these practices   diminished over the years, they continued to attract criticism from the temperance cause.

The regular lodge night was the private face of the friendly society, but the anniversary or annual feast increasingly became its public face.  The celebration took place on the anniversary of the formation of the club or lodge. It was its 'birthday' and the culmination of its year. The press sometimes called these events 'demonstrations' and they were indeed a public opportunity for the societies to demonstrate the strength of their membership and its respectability. Hundreds of friendly society members turned out for these processions clad in colourful regalia, bearing banners showing the symbols of their order and very often accompanied by brass bands.

Broadly speaking, the development of the Neath societies had followed the general pattern with some Welsh and some more specifically local features. Up until the mid -1830s all of the Neath societies had been local and independent, but the later century came to be dominated by ‘affiliated’ orders organised on a national or sometimes a regional basis. The affiliated orders first arrived at Neath in 1835 with the formation of the Caractacus Lodge, number 934 of the Oddfellows of the Manchester Unity.  By 1839 the lodge was meeting in the King’s Head, New Street, which was a respectable house popular with many friendly societies. The Oddfellows were followed by a Welsh order known as the Ivorites, by the Foresters and the Alfreds.

So, what kind of people were friendly society members?  There is only a very limited answer to this question as full membership lists are rare and it had been thought that none survived for Neath. However, in 2018 an account and contribution book for the Prince of Wales Lodge was donated to the Neath Antiquarian Society. Research has confirmed that this society was affiliated to the Independent Order of Loyal Alfreds; it met at the Prince of Wales public house which once stood in in Bridge Street. The book, which is found under reference NAS Z 105/1 contains lists of members from the 1860s and details the benefits paid for sickness and of child funeral costs - it will provide much valuable material for future research.

Friendly societies went into steep decline following the development of the modern welfare state in the 20th century. The last surviving Oddfellows Lodge in the Neath area appears to have been the Friend in Need Lodge which met the Dulais Rock public house Aberdulais from 1859 to 1980. Material relating to the Friend in Need Lodge can be found under reference NAS Odd 1–5. The papers of the Lily of the West Lodge at Glynneath can also be found at the Mechanics' Institute under reference NAS Z 70 1-7. 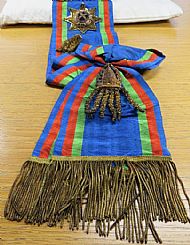 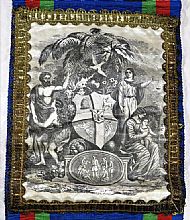 While looking for visual material to illustrate a talk on the subject, the author was asked by an NAS member whether he could identify a mystery ceremonial sash which had been handed down to her family; was it a piece of friendly society regalia and, if so, which friendly society did it relate to? Although the sash bore symbols which were similar to other friendly societies and those used in Freemasonry nothing on the Internet seem to be a complete match. Enquiries were made with various museums and eventually photographs of the sash were circulated amongst curators of collections relating to social history. One of the curators saw similarities with photographs of societies elsewhere that enabled us to link it to The National United Order of Free Gardeners. The letters PGHE on the shield denote the biblical rivers said to have flowed out of Eden - Pison, Gihan, Hidekkel (Tigris) and Euphrates - Adam after all was the first Gardener. The Order came to the Neath area in 1893 and achieved some substantial growth within lodges in Neath, Crynant, Resolven and Tonna. In fact the order held its national conference at the Gwyn Hall in Neath in 1896 and a local man David Matthew Parry Evans was installed as Grand Master, which we can think of as the national chair, in 1910. 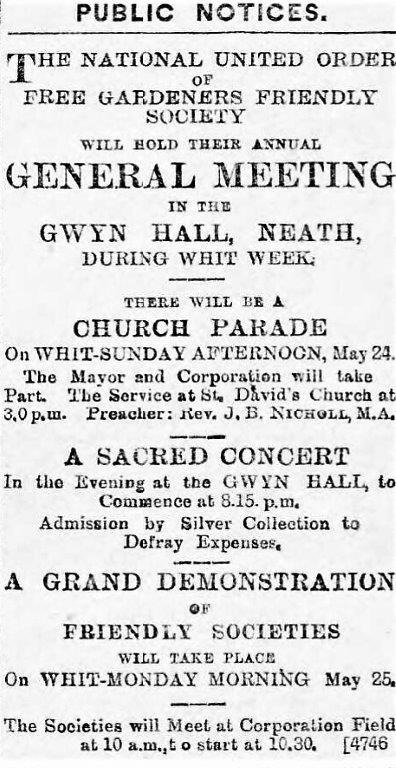 The author would be happy to assist other historians who wish to research the history of friendly societies in their own area. Briton Ferry, Skewen, the Dulais Valley and the Vale of Neath all had substantial friendly societies and research in these areas will further develop our understanding of these important organisations.