The Society was pleased to be invited to the recent rededication service held at St. Thomas' church for the restored panel depicting the Royal Arms of King George II. 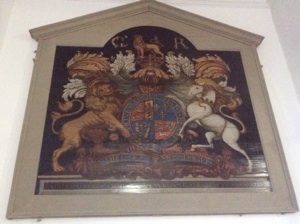 As part of the Dissolution, King Henry VIII established himself as head of the newly formed Church of England.  It thus became customary to display the Royal Arms in all parish churches to act as a visual aid by which those attending were reminded that it was the monarch who now had authority over the church and not the Pope.

During the English Civil War most of these Royal Arms were torn down and destroyed, so there are very few early examples that remain today.

However, following the end of the Commonwealth and the Restoration of the Monarchy in 1660, churches were encouraged to display the Royal Arms as a sign of allegiance to the Crown.  The example in St Thomas' is dated 1731 and was probably mounted on the east wall of the north aisle following the completion of this extension to the church in 1730.  It measures over 11ft wide and 10ft high, painted in oils on wood and set in a gabled frame.

It is believed that these dimensions make it the largest of its kind to be found in a church outside London.

There is no record of who painted the panel but unusually the names of two prominent Neath men are delineated at the bottom.  These are John Hopkin, Portreeve and William Gabb, Churchwarden.  The question arises; did these two men sponsor the panel?

It took many months of work by expert conservationists to remove the centuries of dirt and grime.  The result is breath-taking and those who remember the panel before it was removed can hardly believe the splendour and grandeur that have resulted. 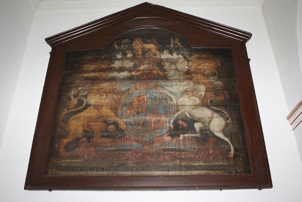 There are many historical reasons to explore St Thomas' church and all visitors should put the Royal arms panel on their 'must see' list.

The 'before and after' images appear by courtesy of www.parishofneath.org