WHO WAS RICHARD PRICHARD?

The home of Richard Prichard stood for more than 200 years in Water Street, Neath, only to fall foul of the council’s 1970s town redevelopment plans. We know who built the house as it proudly bore the legend, ‘Richard Prichard 1764’ on a plaque on the front of the house. 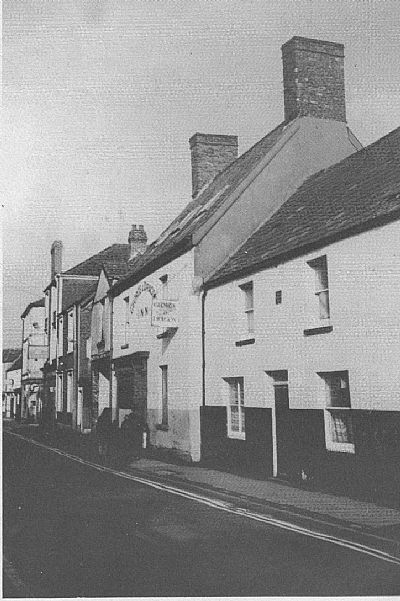 Richard Prichard’s house is her seen to the left of the George and Dragon Inn.

It was demolished in 1978 to make way for a Tesco store.

The house was built at a momentous time for Water Street and for Neath.  That year the Neath Turnpike Trust was established and changed for ever the method of road maintenance.  Until that time able-bodied parishioners had to give up 6 days a year to dig ditches, cut hedges and to generally repair, maintain or renew roads in the area.  Failure to do so led to a fine and your name being read out in church after the Sunday service.

The Neath Turnpike Trust consisted of 50 grandees who met annually – most often in the Ship and Castle Hotel, to auction the five gates and chains within the Trust’s area.  Three of those were in Neath town on the western end of Cadoxton river bridge, in Penydre (which possibly moved to Tonna Road, Llantwit) and at the Merra though the latter later moved to Eastland Road and then to Southgate.  Money from the tolls gathered went towards looking after and renewing the main roads and bridges in the area.

The main thoroughfare through town (The King’s Highway) led along Bridge Street, Cattle Street, High Street (now called Old Market Street), Water Street and Eastland Road.  The year after the Trust was formed one of the first major repairs undertaken was to move the Swan Brook – also called Gnoll Brook – from the middle of Water Street, whence it ran to a pond near the castle.  The brook was moved behind the houses on the north-eastern side of Water Street.

Who then was Richard Prichard?  There is very little known about him.  He married Ann Legg in St. Thomas’ church in 1766 and a Marriage Bond tells us that he was a carpenter.  He died in 1780 without leaving a will.  His widow who administered his estate was ordered to draw up an inventory but regrettably that has not survived.  He was probably of a good age as he is not named on the 1763 Militia List which included every able-bodied man between the ages of 18 and 45.

Fortunately through other wills we know that he inherited all his bachelor brother’s property and chattel when he died early in 1766. Just a year earlier their father, Rees, had died and he was a particularly interesting character.  In July 1763 a lease was granted to him on four dwelling houses in Water Street.   Rees Prichard is named there as a maltster and the lease is for the lives of his son Richard, grandson William Edward (the son of William Edward, cordwainer, and Margaret Prichard who had married in 1751) and of a William Wagstaff who seems to have been a son of one of the occupants.

When Rees Prichard died in his will he left to his son David, 'all that messuage or dwelling house with the appurtenance of wherein I the said Rees Prichard do now dwell together with the Croft and Garden thereunto belonging commonly called or known by the name of Long Acre containing in the whole by delineation Four Acres' and continued..'part of the said premises which lies to the North end of the Brewhouse containing those several rooms following (that is to say) one room or kitchen and one inner room which my son Richard has for a joinery shop) and one room or chamber over the said two other rooms all and singular which said premises I hold under George Venables Vernon the younger esquire.'

The maltster’s business passed from Rees Prichard to John Young (died 1803) to Richard Morgan to David Arthur who died in the 1850s.  The latter held four leases for public houses in Water Street – the Bull Inn, Plume of Feathers, Mason’s Arms and Lamb and Flag.