There are a good many visitors to the Neath Antiquarian archive at the Neath Mechanics' Institute whose prime line of research is connected with finding out more about their own particular family genealogy.  Through census returns, maps documents and sometimes photographs they are able to unravel a fascinating trail.

One such person could not believe her luck when a chance meeting at the NMI suddenly broadened the horizon of her reserches.  She relates this event in her own words which the Society has pleasure in posting below.

Could this happen to YOU there is only one way to find out - COME ALONG AND VISIT our friendly archive.

A Chance overhearing ….. and where it  led! 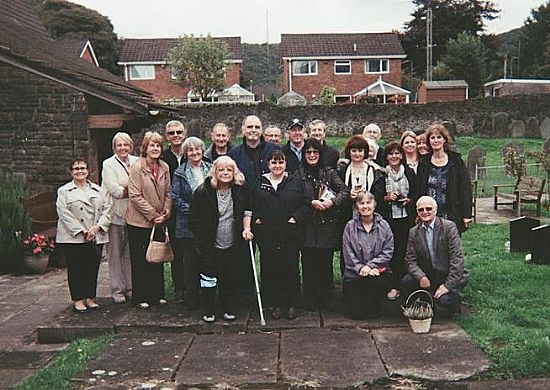 In October 2016, on one of my infrequent calls to Neath Archives, I was viewing a large map, but was aware of someone quietly studying a book at the same table, who, I consequentially discovered, was also on an occasional visit.

A few minutes later, Robert Davies, the current Chairman of Neath Antiquarian Society, approached the man with the book and spoke to him. “Hello, Leighton. What are you looking at today, then?” Hearing his reply was unavoidable. I heard mention of ‘Thomas family of Dyffryn Arms’. Thinking this too good an opportunity to miss, (I thought – well, I can only be wrong and what would be the harm in a moment’s embarrassment?) I said, “Excuse me, I couldn’t help overhearing. Did any of those Thomases marry into the Duncans?”

He stood up immediately and declared, “I’m Leighton and I’m descended from Mary Duncan and John Thomas.” I couldn’t quite claim the same, but we were certainly related. My mother still carries the name Duncan as her middle name. Mary was the older sister of my great grandfather Thomas Duncan. Their father – also Thomas – was the gardener and farm bailiff of Howel and Ellen Gwyn. When the Gwyns moved to their new home at Dyffryn House in 1854, the Duncans went with them.

Once the introductions were over, I said to Leighton, “You know, next year we have a big anniversary. The Duncans will have been in this area for exactly two centuries. We should mark it, shouldn’t we?” He agreed that it would be a good idea.

Before we knew it, July had come around. I had an email from Leighton, prompting a start on our proposed ‘clan gathering’ which we agreed should be on 21st September, if at all possible, two hundred years to the day when little Robert Duncan was baptised at St. Mary’s Church, Llansawel. (We knew that they must have arrived very recently in this area as the baby had been born in ‘Bristol, Somersetshire’, while his parents Robert and Ann were en-route from Honiton, Devon where Ann had been born and where they had married in September 1814.) For many years the family lived at ‘Shelone’, while Robert was employed as a gardener at Vernon House, later moving to Baglan House, where he worked for Howel Gwyn. As his name suggests, Robert Duncan Senior was a Scotsman – unfortunately he died suddenly (in the kitchen of Baglan House) just ten months before the 1851 Census, leaving us tantalisingly close to discovering his birthplace c. 1788. A name such as his in Scotland is all too common. Ann lived for another 25 years, by which time she was into her eighties, ending her days at ‘Baglan Lower’.

Over the first eleven years of their lives in Briton Ferry, Robert and Ann had four more children – Ann, Isabella, William and Thomas. Tragically, William drowned aged seven while playing with other children in Mr Ritson’s yard in July 1831. He was buried in the family plot, which is very close to the church door. (William Ritson was the contractor who built the local docks for Brunel).  Those familiar with Briton Ferry will know of Ritson Street.

William Duncan’s four siblings all married and had large families, so there could potentially be many descendants in this area alone, apart from further afield.

Leighton and I both gauged interest among our known cousins and contacts through Ancestry and decided that it would be well worth having a gathering even if we ended up with a handful of people. Revd. Wendy readily agreed to our having access to St. Mary’s Church. She would be away, but we would be taken care of by two stalwarts of the parish, Aileen and Gordon Willis, who welcomed us with warmth and patience.

In the event, we had about twenty five people in the church (including spouses). Some were local, but we also had people who had travelled from Pontypridd, Newport, Cwmbran, Pembrokeshire, Bristol and Oxfordshire. Several others sent apologies because of work or family commitments. Most of those present were of the Thomas line, but we did have a group who were descendants of Isabella.

To my astonishment, one of those who walked through the church door was Christine, a first cousin of Leighton’s, who had been in the same year as me at secondary school. We had not met since leaving school forty years ago and had not an inkling in those days that we were related.

Appropriately, we were all able to gather around the ancient font – believed to date from the thirteenth century – over which our ancestors had been baptised. There we shared the story of those ‘first’ Duncans and Leighton laid out the family tree scroll which he had painstakingly put together. It was just as well that St. Mary’s were able to provide us with a long table! Those present were able to find known ancestors and to trace the line as far as possible – to their own names and beyond in some cases.

On leaving the church, we assembled at the grave for a photograph and to leave a basket of heather (an appropriate Scottish emblem) on the stone. This was placed by Adrian Pattinson, a great-great-great-grandson of Robert and Ann Duncan. Adrian, my second cousin, was someone I had never expected to meet. I certainly knew his name – back in the 1940s, while a toddler, he had stayed for a short time at my grandparents’ home in Neath with his parents, visiting from Newry. (Adrian’s father and his siblings were born in Skewen – he carried with him copies of the census. The family first lived in Burrows Road and later moved to Coombes Street (now called Coombes Road). His uncle, Thomas Lewis Pattinson, has his name on the memorial obelisk on the lawn at Carnegie Hall as well as on a plaque at the Gnoll gates. A member of the Royal Welch Regiment, Lewis lost his life in Holland in September 1944, aged 31.)

We then left St. Mary’s and made our way to share a meal together at the Bagle Brook, passing a few places along the Old Road route which held ancestral links, such as Thorney Road and Swan Road. Again, we were well catered for by the restaurant and the staff who draped our home-made tartan bunting near our table. (The Duncan crest has the motto ‘Savour the Moment’ which we much preferred to the other, which is ‘Disce Pati’ which means ‘Learn to Suffer’!) At the appropriate time, the waitress brought along our large celebration cake which we enjoyed together and were able to share with relatives unable to attend. Each household was able to take away a section of the bunting as a memento of our celebration together.  We also took up a collection for St. Mary’s Church in appreciation for the hospitality shown to us.

This was an event which I never expected to be part of, much less to be involved in organising. As a result, many of those who attended have broadened or deepened their network of contacts. It was  a special pleasure to return to Neath Archives and to say to Robert Davies, “Thank you so much for asking that question almost a year ago and opening a window of opportunity for a number of people. But for you, this event would not have happened!” Was this chance or design? I am convinced of the latter. 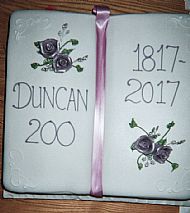 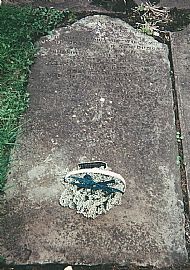