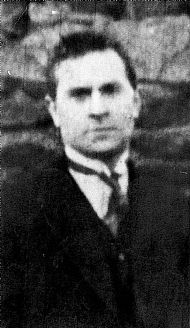 My father was born as Donato Simeone in the town of Fragneto Monforte, in the province of Benevento, Italy on the 29th of May 1890.  He travelled to the United Kingdom at the age of eight years old accompanied by two younger brothers and were fostered by an Italian family in Maesteg named Ullo.   Even though he was not a blood relation it was here that he acquired the name of Dai Ullo.

Some years later, along with his wife Elizabeth, he moved to Neath and began a small confectionary and tobacconist’s business at Stockham’s Corner whilst being employed as coal miner at a colliery in Aberdulais.

Walking to the colliery was quite a distance, so he purchased a large van to travel to work. Many workmates asked him to take them with him to work and gave him some pennies to cover costs.

He was then approached by T J Pearn & Sons Limited who had a furniture shop at 28-30 Briton Ferry Road, who asked him if he would be interested in using his van to deliver heavy goods for them.  This he did and, due to his mobility, he then secured a franchise to distribute sweets and cigarettes to various retail establishments.

Local folk requested that he take them on an outing, so he had a carpenter to cut windows in the sides of the van and bolt seats to its base, but fitted in such a way that they could be easily removed for deliveries and be replaced for carrying passengers. 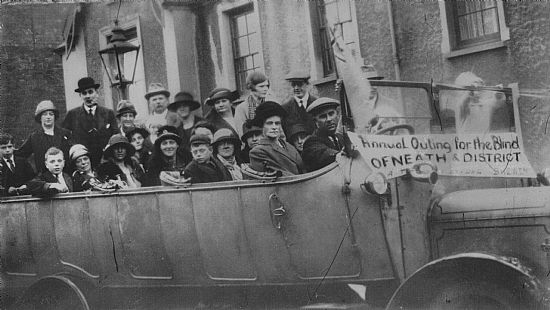 Charabanc outing for the Blind of Neath and District

He lived at Windsor Road and it is here that the Windsor Omnibus Company came into being in 1920.  Maintenance was done at the Griffiths Buildings in Melyncryddan (now Peter Sadd’s carpet store).  As far as I know there is still an eight hundred gallon tank buried there, since all of the fuel needed was bought in bulk.

During the General Strike of 1926 his dedicated staff all reported for work, but he told every one of them not to become blacklegs.  Each week they all assembled at his home and had lunch with him, at the end of which each man went home with a ten shilling note in his pocket to make certain that their families did not go hungry.  Some names I can recall; Jack Seagar, Jim Seagar, Sydney Lewis, Mr Moody (who became Fire Officer of the Neath brigade).

The route of the bus started at the Bowens Arms Hotel, Skewen and terminated at the Travellers Rest, Briton Ferry and the return fare was 3d. (1.5p).  At that time there were several other companies operating in the area but the Windsor Company had the only licence to operate on the ‘old road’, the others had to share passengers on the ‘main road’. 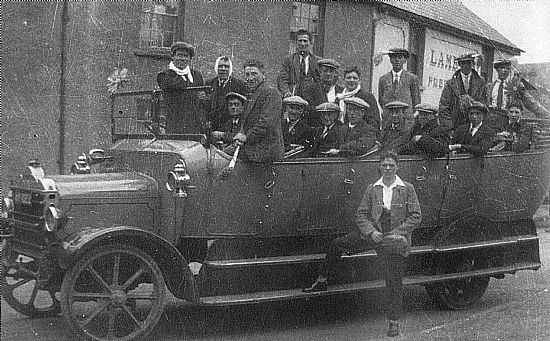 The family then moved to 30 London Road.  The main reason for this being that my father had plans to demolish houses 31 and 31A to build a garage enabling his fleet of coaches to enter via Rectory Road, be serviced and then exit by London Road.  Unfortunately, he passed away in 1936 aged just 46 years old before these plans came to fruition.  He was successful in being granted British Citizenship, his naturalization certificate being signed on 15th June 1931 in which he adopted the name of David Williams and had moved to 53 Windsor Road (now part of a tattoo parlour).  He was also influential in providing the shelters positioned at either end of the bus stand which in those days were furnished with seats both inside and outside for passenger comfort. 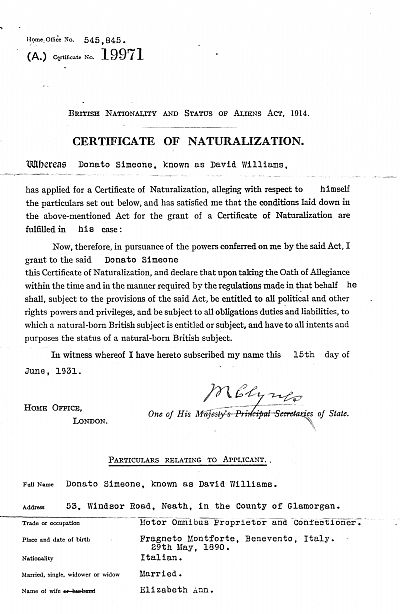 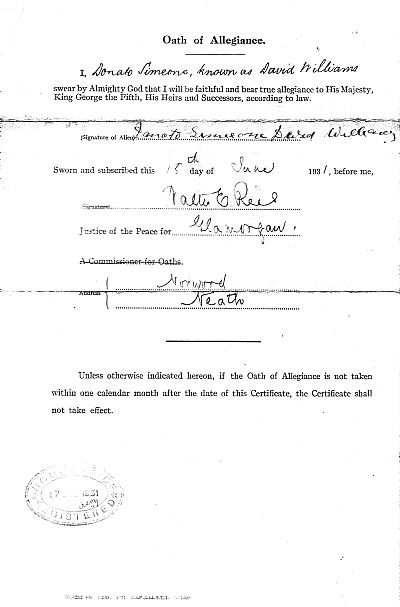 Soon after his death we received a call at the house by several pensioners who, unknown to them, made enquiries to his whereabouts for his absence was noticed.  When questioning these people it was discovered that he would appear every Thursday and give each pensioner a silver sixpence for their ‘liquid refreshment’.

When World War Two was declared in 1939 my mother was fearful of fuel shortages and the staff being called up to serve in the armed forces.  Therefore, she sold the business to the United Welsh Bus Company, who were amazed at the amount of private licences that the Windsor Omnibus Company had accumulated enabling passengers to be taken to all corners of the country.