AN OLD WINE BOTTLE – A THOUSAND MILES FROM HOME

There is a song about ‘an old beer bottle, a thousand miles from home’.  This tale is about a wine bottle which re-appeared on a continent thousands of miles away from its place of origin – Neath.

Earlier this year the Neath Antiquarians were contacted by Mr. Paul Hanrahan, seeking information about Thomas Guest.  Paul is a bottle collector and was preparing an article for a specialist magazine, based on the find of a wine bottle fragment from Neath in South America.

‘The 240-year-old seal was found a long ways away from Wales in Guyana, a small country and former Dutch and British colonial possession on the northeastern downslope of South America. It was chanced upon many miles up the Berbice River in the vicinity of a former Dutch fort, Fort Nassau, and presented to me in 1977 by a Mrs. Kurtzious, the late matriarch of a family that lived directly across from the fort’s meager and mostly overgrown remnants. It was likely originally attached to a bottle form typical of the main sort of dark green wine bottles made in England, with Bristol then being the closest bottle-making centre to Neath, in the early-to-mid 1770s – cylindrical, squatty, mallet-like.’

The Society was fortunately able to supply Mr. Hanrahan with a great deal of background to the Thomas Guest named on the seal.  Although he himself was a somewhat hazy character there is no doubt that he was of some importance in late 18th century Neath.

His iron topped tomb stood in the graveyard at St. Catwg’s Church, Cadoxton but was probably dismantled in the 1840s when the nave of the church was rebuilt and extended.  Today the engraved tomb top is tucked away inside the vestry of the church.  The fact that the tomb was iron-topped suggests that Thomas Guest was an iron master and certainly his social status was reflected in the fact that he had a personalized bottle seal.  He was the brother of John Guest who started the great iron work at Dowlais.  What exactly he was doing in Neath remains a mystery but his most likely link was through  the firm of Coles, Lewis & Co which had interests in Melincourt and Ynysygerwn iron works.  Thomas Lewis was one of the founding partners of the Dowlais works.  Thomas Guest features in the article entitled ‘Some Lesser Known Memorials at Cadoxton Church’ in Volume Two of ‘The Neath Antiquarian’ (still available for sale).

“Another question that begs speculation is how one of Thomas Guest’s sealed bottles ended up in Guyana. It’s unlikely, given the demands of his trade, that Guest himself ever set foot in Guyana, but in accordance with common practice back then, he might have given one or more of his bottles – wine-filled, of course, and to be carried as part of one’s personal provisions – to a friend or acquaintance about to set sail for the West Indies. Though Guyana was still under Dutch control in the late 18th century, its residents and visitors included many British nationals.” 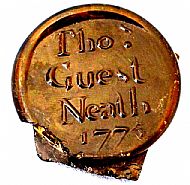 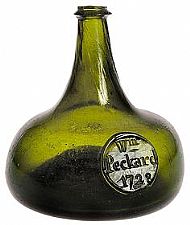 Sealed bottles have an applied glass seal on the shoulder or side of the bottle. The seal is a molten blob of glass that has been stamped with an embossed symbol, name or initials, and often it included a date. Collectors of bottles sometimes refer to them as Applied seals, Blob seals or Prunt seals.

Up until the 17th century bottles would have been made of pottery  or leather but by the middle of the century a 'new' black/dark green glass wine bottle came into general use. Early glass bottles were squat, broad and rounded sometimes referred to as 'onion or mallet bottles'.

Around 1636 English law prohibited the sale of wine by the 'bottle' in England, according to Jancis Robinson's Oxford Encyclopaedia of Wine. Individuals were encouraged to have private bottles made carrying their own seals which they then took to a wine merchant who filled them with wine from a cask using a liquid measure.