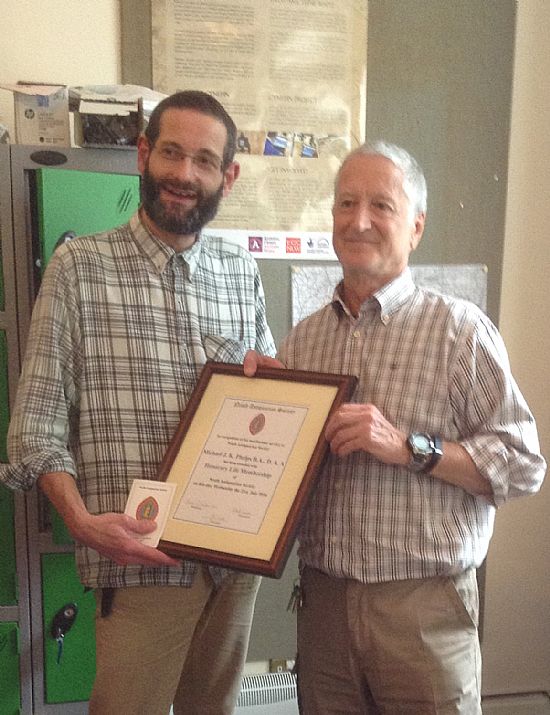 It was with mixture of bitter sweet emotions that a presentation took place recently at the Neath Mechanics’ Institute.

As one of the outcomes in achieving this year’s budgetary cuts imposed on Cultural Services by the City and County of Swansea, the management of West Glamorgan Archive Service decided to reduce staffing levels by one part-time search room supervisor and one full time archivist.  It was further decided that these economies should come entirely from the Neath facility and which would additionally cut the opening days by 50%.

The result is that two long serving staff would stand down from the NMI.  Search Room Supervisor, Liza Osborne finished in May and Michael Phelps BA, DAA will be leaving the service at the end of July.  The longest continuous serving member of staff, Michael’s career with WGAS began over 24 years ago.  He has been the resident archivist at the Neath Mechanics’ Institute since June 2008.

Amongst his duties during that time has been the ongoing cataloguing and preservation of the Neath Antiquarian Society Archive. By his efforts this has improved considerably, particularly by the re-listing of many items that had only been superficially identified in the early years when the NAS had moved to the building.

By Michael’s diligence as a consummate professional and attention to detail, researchers are better able to discover with speed and efficiency, the great breadth in variety of documents, maps and plans that are held in the strong room.

During his time at Neath, Michael has been incredibly popular with visitors to the NMI building whether it be general members of the public engaged in unearthing their family history, or academics and researchers wishing to access items from the NAS Archive.

Every request be it small or large, easy or difficult was dealt with, by him, in an enthusiastic and friendly manner which attests to his impeccable credentials and experience.

As a mark of the esteem by which he is held at Neath and for services rendered, it was decided to install Michael Phelps as a Life Member of the Neath Antiquarian Society.  To this end as part of an impromptu function he was recently presented with a framed certificate recording this fact and of his time at Neath.

His departure will leave a void and he will be sadly missed by a great many people.  However, it is to be hoped that he will not become a stranger and visit the NMI and the NAS from time to time.  Everybody wishes him well in whatever path his life takes in the future.