One of the ongoing projects of late is the digitisation of those images in the NAS archive that exist on glass plates.  Due to their fragility and in some cases long term deterioration by having existed in varying environmental conditions, it was felt essential to undertake this exercise before they were lost forever.  In this task we were indebted to the help and advice of Damian Owen at our fellow institution, the Port Talbot Historical Society.

From a total of over 400 plates, what has literally 'come to light' is a remarkable mixed collection of subjects from Edwardian Neath; street scenes; Abbey ruins and excavations; family snapshots and even views from other parts of west Wales.  Some had been used in NAS publications of the past, but many had never been seen since the time they were put into storage.

One plate shows a model of the ruins of Neath Abbey before excavation which has caused much excitement.  Quite independently, research had been made regarding the Neath Philosophical Society (the predecessor to the NAS).  Seeing the image of the model caused both a shudder and a ‘light bulb’ moment, as can be seen from the following research snippets; 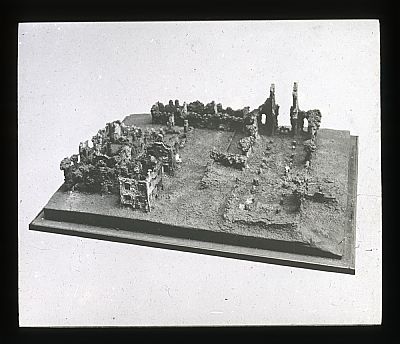 …… in 1837 Howel Gwyn presented a cork model of Neath Abbey.  This was an addition to other models in cork, (Margam Abbey & Chapter House) held in the Museum of the Neath Philosophical Society since 1835….

......by 1866 there were insufficient funds to pay rent and other expenses ......... the Philosophical Society was thus disbanded and whilst some of the gifts and specimens were returned to their donors, most of the collection and library was sold realising £15 and £100 respectively.  It is likely that much of the collection found its way to the Royal Institution of South Wales in Swansea and to the Neath Mechanics’ Institute in Church Place where many an ordinary man would enhance his education at a building designed by Alfred Russel Wallace (where he also lectured).

....... In an edition of the NAS Transactions, Glen A Taylor noted that - ‘A model of Neath Abbey (in cork) is now, 1931, at the Royal Institution of South Wales, Swansea, probably the same one as mentioned.’

‘Minerva' Vol.2 (1994), the journal of the RISW, mentions Colonel Evan Morgan who had made a cork model of Swansea town centre in 1840 and who in 1839 was being persuaded by a Dr Gutch to exhibit his model of Neath Abbey.  The Colonel was also encouraged by John Henry Vivian and Rev.  J.M Traherne to make a model of the 'old Plas house' ,   a largely Tudor house, by then in ruins, but once the residence of Sir Mathew Cradock (c. 1467-1531). This was unfortunately destroyed during World War II, and his Neath Abbey, too, has disappeared.

This poses a few tantalising questions;

Were two models of Neath Abbey produced by Colonel Morgan, or if there was only one model, would he have had to borrow it back from Neath to exhibit it at Swansea?

Was the Neath model made by the modeller of Margam Abbey & Chapter House , considering that cork modelling is as popular now as it was then?

Is Glen Taylor correct in his assumption of 1931 that he was looking at the model from the Neath Philosophical Society, or did he see the model made by Colonel Morgan?

Whilst we can never be entirely sure of the answer to the riddle what can be said is that it is quite possible that this image is the only surviving visual record of a cork model of Neath Abbey in existence.