Following our objective and commitment to preserving our local historical past, the Society is excited to report that thanks to a well-known worldwide market place, two long lost historical documents have been brought back to their Neath ‘home’. It is always a mystery how items can become dispersed so far from their point of origin.  In this instance they had been bundled up into a parcel, which from the postmark was in the 1830s.  Probably damaged even then, they continued to travel.  The vendor purchased them at auction on the South Coast a few years ago.

The first document is dated 1684 and refers to a legacy of £10 paid yearly to the poor of Neath.  The second is an indenture of 1700 concerning an annuity to be paid to Jane Price by Thomas Mansell of Briton Ferry.  They have survived quite well and it makes one wonder how documents of today will look in over 300 years from now.

These parchment or vellum items have been folded for bundling and are also a bit wrinkled in places.  The next action for the Society is to consider how best to conserve and repair them so that they can be displayed to their best advantage.

Meanwhile they have been transcribed (as written) for the benefit of those who may be interested in easily reading the content. 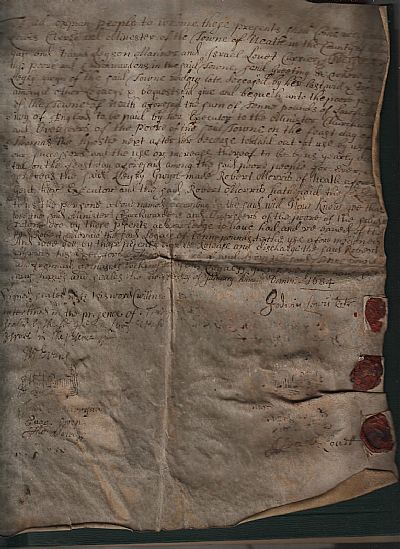 To all those people to whom these presents shall come we Godwin Lewis, Clerke and Minister of the Towne of Neath in the County of Glamorgan and David Leyson, Mariner and Israel Lovet, Currier Overseers of the poore and Churchwardens in the said Towne send greetings etc.

Whereas Lleyky Gwyn of the said Towne widow late deceased by her last will and testament amongst other legacies and bequests did give and bequeath unto the poore people of the Towne of Neath aforesaid the sum of Tenne pounds of lawful money of England to be paid by her Executors to the Minister, Churchwardens and Overseers of the said Towne on the feast day of St. Thomas the Apostle next after her decease to be paid out at use by us and our successors and the use or increase to be by us yearly distributed on the feast day of the aforesaid among the said poore people for ever and whereas the said Lleyky Gwyn made Robert Morris of Neath aforesaid Gent her Executor and the said Robert Morris hath paid the said legacy to us the persons above named according to the said will Now know yee that wee the said Minister Churchwardens and Overseers of the poore of the said Towne doo by these presents acknowledge to have had and received of the said Robert Morris of the legacy of Tenne pounds to the use aforementioned and we do by these presents release and discharge the said Robert Morris his Executors and Administrators of any toching from the said Tenne pounds and from all demands of the said legacy in manner whereof we have set our hands and seales the twelfth day of January anno domini 1684

sealed by the said Godwin Lewis 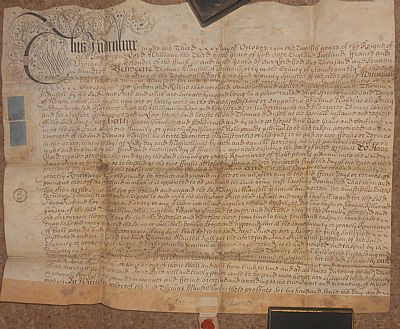 Sealed and delivered in the presence of us

1. There are two six penny tax stamps pasted in the left margin of the document

2.[als] could be an abbreviation for alias, which may be what today is called nee or maiden/unmarried  name