One of the most important projects undertaken by the NAS was the excavation of the ruins of Neath Abbey and is a project that is well documented in publications internationally.  This archaeological dig was commenced in 1924 performed by a team of NAS members and others, led by Glen A. Taylor.  During the progress of the work, gentry and nobility visited the site along with many visits from the notable archaeologist Sir Mortimer Wheeler.  All applauded the way in which the task was being undertaken.

Although work continued during the 1930s it was marred by the death of Glen A. Taylor on 14th November 1935 at 55 years of age.  It was considered appropriate to place a memorial to celebrate this great man which is situated within the Neath Abbey ruins at the bookstore below the night stairs.

The ravages of time and weather have resulted in the inscription becoming a little illegible and it is considered high time that the tablet received some repair.  As reported on this website CADW are progressing a long term project of restoration etc. on the Neath Abbey ruins and the NAS is pleased to report that a member of their team (who had previously been a monumental mason) has volunteered to refurbish the memorial during the winter months. 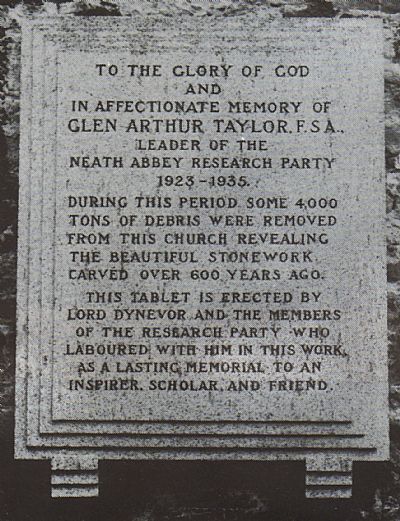 A brief article entitled ‘The Neath Abbey Research Party’, taken from the NAS publication ‘Keeping the Past Alive’, can be accessed from the left hand menu buttons