(Never let a good story get in the way of the truth!) 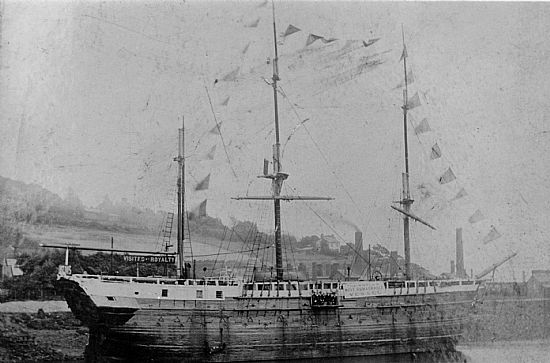 The air at Briton Ferry was bristling with excitement when a ship named Success berthed at the town dock in July 1906. Decked with banners that announced 'VISITED BY ROYALTY', 'THE WORLD'S MOST REMARKABLE VESSEL' and 'GREATEST EDUCATIONAL EXHIBIT', who could resist such claims; it was an attraction not to be missed and many would part with their well-earned pennies to board the vessel eager to discover what lay on and beneath her decks.  The advertising blurb continued;

'Aboard her are now shown, in their original state, all the Airless Dungeons and condemned cells, the whipping posts, manacles, branding irons, punishment balls, cat o' nine tails, coffin bath, and other fiendish instruments of brutality. This wonderful vessel has made history through three centuries. She is the oldest ship in the world and the only convict ship left afloat out of that dreadful fleet of ocean Hells which sailed the Seven Seas in 1790. She marked the beginning and the end of England's Monstrous Penal System. She is unchanged after 135 years, nothing being omitted but the Human Freight.'

Inquisitive eyes were met with a display of horrific instruments of torture and punishment, waxworks and prison cells accompanied by set piece re-enactments, called 'lectures', of life aboard performed by 'convicts' and 'officers' all appropriately uniformed.  Also exhibited was a set of heavy armour as used by the notorious outlaw Ned Kelly.

Not to be confused with other ships of the same name; including sixteen vessels that had served the Royal Navy.  Inaccurately described as a 'convict ship'1 the Success, a fully rigged teak hulled merchant trader of 621 Tons was built in 1840 at Natmoo, Tenasserim, Burma for Cockerell & Co. of Calcutta and traded in the Indian sub-continent.  She was sold shortly after to London owners and made voyages as an emigrant ship between the UK and Australia during the 1840s.  In 1843 on a trip to the Swan River Colony (present day Perth) a birth occurred aboard when three days from shore.   On another voyage, the week before Christmas 1849, Irish families who had escaped the Great Famine arrived at Sydney.  The trips continued until 1852 when at Melbourne the crew of the Success deserted her for the goldfields of Victoria.  The abandoned ship was obtained by the government of Victoria and located at Point Gellibrand for use as a prison hulk2.   It was during this time that the infamous Australian bushranger Ned Kelly served a term of imprisonment.

From 1860-1865 Success was used as a women's prison; as sleeping quarters for a boys' reformatory in 1890 and following this, as a munitions and gunpowder store.  Around this time many prison hulks were being sold off on the condition that they were broken up.  When the Success was sold to a UK concern she escaped this fate due to an error in the paperwork.

The Success was refitted by a group of British entrepreneurs as a museum ship to travel the world advertising the perceived horrors of the convict era. This is what gave rise to the mistake that she actually was a convict ship. It was also falsely claimed that she was the oldest ship afloat at the time when in fact it was the USS Constitution of 1797.  The venture was a commercial failure; abandoned by her owners, the ship was scuttled at Kerosene Bay within Sydney Harbour in 1892. 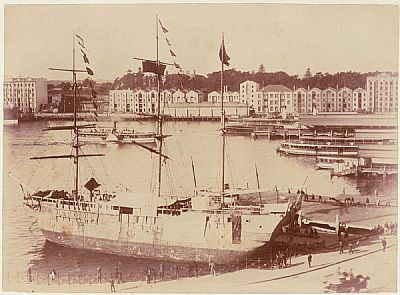 The sunken vessel was sold yet again to a second consortium and re-floated in 1893.  After refitting a tour was made of Australia calling at Brisbane, Adelaide and Hobart before returning to Sydney.  Some forty years since leaving UK shores, she headed for England arriving at Dungeness on 12th September 1894 for a tour of ports around Britain that kept her in British waters for the next seventeen years. 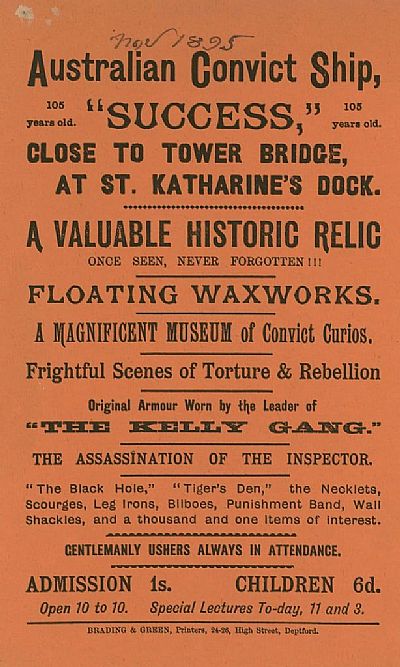 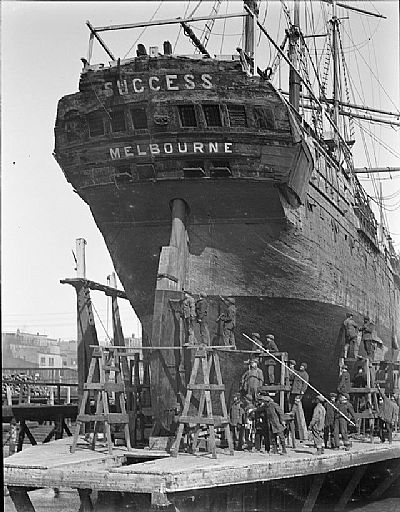 It appears that the owners had made a sufficient return on their investment, since in 1912 the ship was sold once more, this time to a group of American businessmen and left Liverpool heading for the United States on 10th April 1912.3 A tour of the eastern seaboard followed and later the ports of the Great Lakes.  Whilst at sea returning to New York where he would debut his famous Chinese Water Torture Cell, the escapologist Harry Houdini received a telegram by 'Captain' Smith challenging him to escape (after being bound and shackled) from one of the cells aboard Success.  Houdini accepted and successfully completed the feat on 4th June 1913.   On 25th April 1915 whilst docked in San Francisco during the Panama-Pacific International Exposition a visit was made by silent movie film stars Mabel Normand and Roscoe (Fatty) Arbuckle; a short film was made of their visit.  Then in 1917 the Success briefly returned to service as a cargo carrier, but sank after being holed by ice at Carrollton, Kentucky in early 1918. On being re-floated she resumed her museum ship role and was a feature of the Chicago World Fair in 1933.  Her long and chequered career with ongoing repairs meant that she was increasingly becoming unseaworthy.  However, the ship had lived up to its name; tens of millions had thronged to visit her (the 1924 catalogue reports 20 million!) and apart from paying their admission had purchased souvenir merchandise in the way of exhibition catalogues, history books of the ship (printed on-board) and postcards. 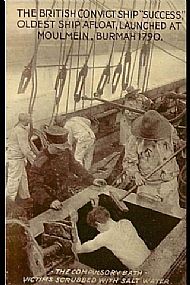 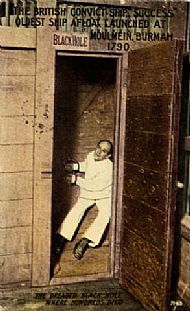 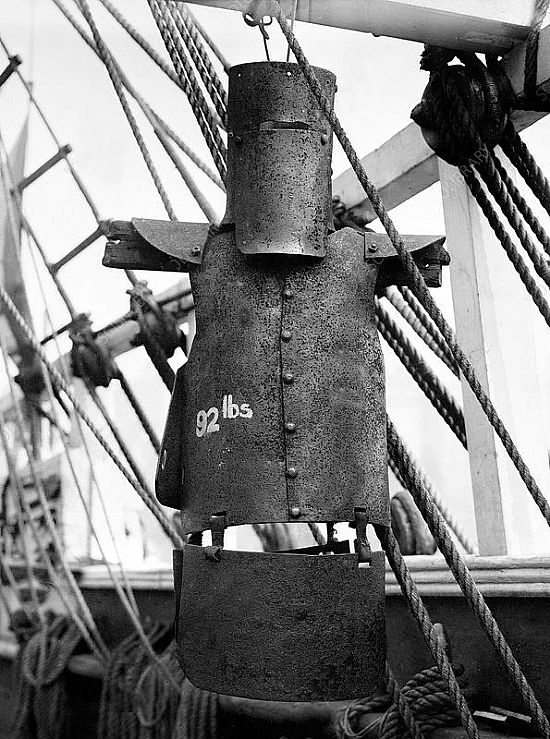 Some of these depicted 'staged' torture scenes, another set feature the armour used by Ned Kelly.  Clearly a replica suit, to avoid spoiling the illusion, this fact is never mentioned in any literature, naturally. One such book stated;

'...Among the numerous relics of lawless life in Australia now shown on board the Success, none is more interesting than the ingenious suit of shot-resisting steel which formed the impenetrable armour of Ned Kelly, the leader of the notorious 'Kelly Gang.'  This rusty relic of the hunted outlaw swings to and fro on the deck, suspended by a rope, a position which is strongly suggestive of the after-fate of the original wearer. The complete suit consists of breastplate, shoulder-guards, back-plate and visor. Indentions made by well-aimed bullets may be seen in clusters, showing that the bushranger was at one time subjected to a hot fire and that if not for this protection he would have met with instant death..'

What reception would have been given by the people of Briton Ferry had they known that the 'convict ship' museum was a hoax.  Many of the exhibits were a result of inventiveness and a stretching of the truth in portraying what it was thought life aboard a convict ship comprised of.  'Year after year the Success was hawked about the sea ports, rivers and lakes of America and year after year her notoriety and the stories about her grew and spread until 1934, when the Commonwealth Government thought the joke had gone too far and instructed the Investigation Branch of the Attorney-General's Department to make a thorough research into the real history of the Success.'

The Australian Government representatives in America, armed with the official history of the ship, made a public statement that the showman's history of the ship was untrue, and gravely resented in Australia.  A thorough investigation of official and other records clearly established the fact that the ship was never used for transporting convicts and debunked much of what was in the Success history book and exhibition catalogue.

It was the end of the road for the old tub.  Sold for scrap she was towed to be broken up at Sandusky, Ohio on Lake Erie but sank at her moorings during a strong storm. Resold again to salvage operator, Walter Kolbe, Success was taken to nearby Port Clinton but, unable to enter the shallow waters, grounded just east of the port.  The end of the ship's colourful life ended on 4th July 1946 with a fire that is generally attributed to vandals presumably the result of Independence Day celebrations.  During the course of the afternoon, watched by many from the shoreline, she burned down to the waterline.  The remains of the ship can still be seen in the sixteen feet of water just outside the harbour. 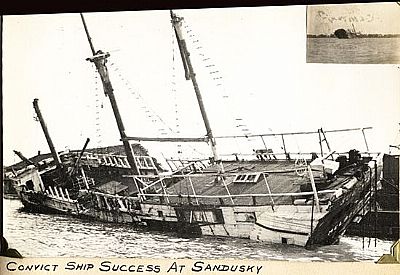 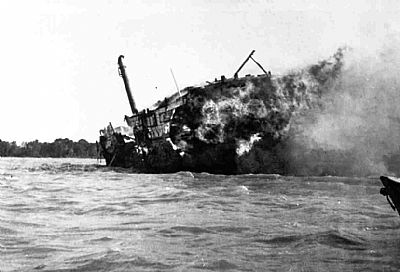 So, coming back to Briton Ferry; it would be interesting to know of any ephemera or artefacts existing in the locality owned by descendants of those who visited the Success - I wonder!  Apart from postcards and books there were trinkets made from the copper cladding of the hull.  Incidentally, she left for Swansea later that month (July 1906).

1. A convict ship was any ship engaged on a voyage to carry convicted felons under sentence of penal transportation from their place of conviction to their place of exile.

2. A prison hulk is a current or former seagoing vessel that has been modified and incapable of going to sea to become a place of substantive detention for convicts, prisoners of war or civilian internees.

3. That same day another ship left Southampton also bound for America - only one would make it to their destination - the other ship was named Titanic.

SOURCES - for those wishing further reading

The History of the Convict Ship 'Success' and Dramatic Story of Some of the Prisoners, 1929

What They Said About Ned!–Looking at the Legend of Ned Kelly through Books (including An Annotated Bibliography of The Kelly Gang), Brian McDonald, 2004.