Considering the fact that one of the main topics of conversation when greeting someone is to discuss the weather, precious little has been written about the great storms, floods and even earthquakes that have historically affected our fore-fathers.  We can remember Michael Fish’s storm of 1987 but how does that compare with storms of earlier times? On looking at some of the past weather phenomena there can be no doubt that even the destruction of 1987 was mild by many standards.

Data exists relating to the damage caused by many storms and we are often told how would-be conquerors of these islands were thwarted by adverse weather conditions and how the mighty Spanish Armada fell foul of some of the worst weather in living memory.  Did these huge storms affect the people of Neath?  Certainly, many of them were local to a particular part of the country, perhaps confined to the East coast or to the Bristol Channel.  Which then were the storms that would have affected the good people of Neath?

Perhaps the earliest record is of a storm in about 1316 which caused the closure of the mediaeval port of Kenfig.  Further storms in 1344 and 1480 completely buried the former Roman coast road.

The biggest flood to affect south Wales was undoubtedly that of 1607 which is today believed to have been the end result of a tsunami (Archaeology in the Severn Estuary, Prof. Simon Haslett and Dr. Ted Bryant. 2003).  The surge which swept up the bottle-neck of the River Severn resulted in the flooding of Gwent in particular to the height of a church tower.  This flood must have had a great effect, albeit to a lesser extent, on people living near the River Neath and its estuary. 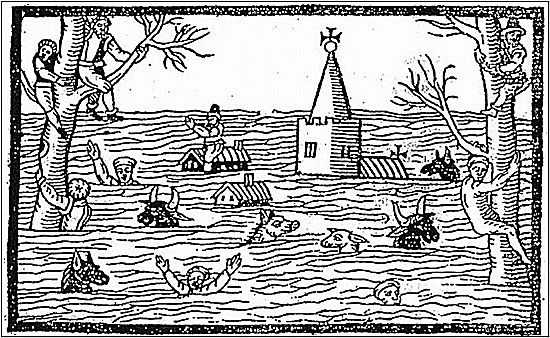 A contemporary depiction of the 1607 flood which affected the whole of the Bristol Channel and in particular the Gwent levels.  The church church is thought to be St Mary's at Nash, near Newport.

Daniel Defoe witnessed this particular storm and wrote, 'No pen could describe it, nor tongue express it, nor thought conceive it unless by one in the extremity of it.  No storm since the Universal Deluge was like this, either in its violence or its duration.' He further described the storm as 'the tempest that destroyed woods and forests all over England.'

This storm hit the west coast of Britain on Thursday, 25th November around the entrance to the Bristol Channel.  Affecting the whole of south Wales before moving across the country, we do not know its effect in Neath but a witness in Chepstow commented on the devastation there.  When the storm was over it was reckoned that 5,700 vessels had been sunk with a minimum 8,000 lives lost.  Four thousand trees were uprooted in the New Forest alone which rather puts into perspective Michael Fish’s storm. 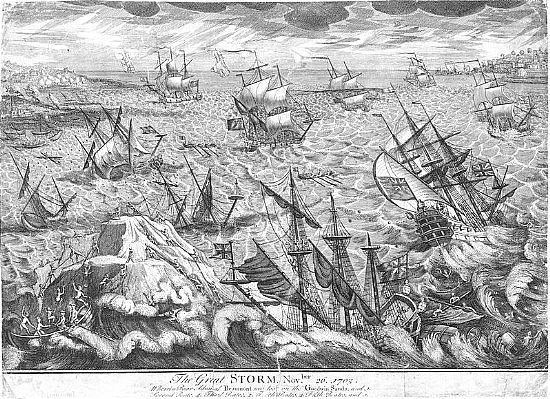 This had started on Monday, 31st August.  By the time the storm died down on the Wednesday it had left a trail of destruction from Pembrokeshire to Newport.  In the Port Talbot steel works 'cranes had been toppled as if they were made from children’s building blocks.'  Naturally trees were uprooted, roofs ripped off buildings and train lines closed by falling debris.  Winds of up to 90 mph were experienced and at sea waves nearly 60 feet high caused havoc.  The Tenby lifeboatmen rowed for six hours to rescue the distressed crew of the Helwick lightship.  The four-masted barque, the SS Amazon, tried to ride out the gale but her cables snapped and she was driven ashore near Margam and 21 of the crew were drowned.  There were just eight survivors. 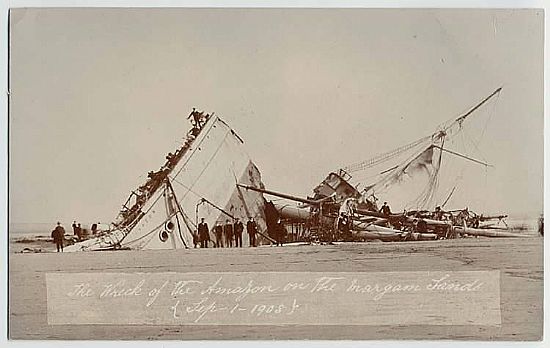 The wreck of the Amazon on Margam Sands

The full-rigged ship Verajean on passage from Cardiff to Mollendo was driven onto the rocks and wrecked at Rhoose Point but without loss of life. 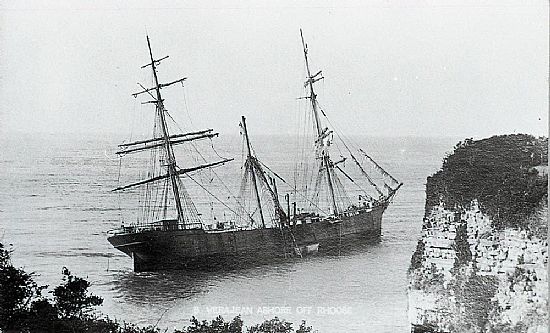 On the morning of Wednesday, 26th July the weather was fine enough to allow hay-making to take place in the Ystrafellte area.  Farmers were at work in their shirt-sleeves and there was no suggestion of what was to come.

About mid-day clouds began to gather and a fierce storm erupted between 1 pm and 3 pm.  The keeper of the Ystrafellte Reservoir had the rare experience of witnessing a waterspout.  The downpour was so violent that one old resident sheltering near the bridge at Castell Mellte reckoned that the river had risen three feet above any level he had seen in over 40 years.  Two wide streams were seen rolling down the side of Fan Llia 'red like blood' with a deal of noise.  Another observer saw what looked like a solid sheet of water descending the eastern face of Fan Lia.

Strangely, within a few miles no rainfall was experienced and the town of Neath remained dry although there was great alarm at the discolouration of the river, people fearing that a dam had burst.

Of course there were many other huge storms such as the one which sank the Royal Charter, a steam clipper which was wrecked off the beach of Porth Alerth in Dulas Bay on the northeast coast of Anglesey on 26 October 1859; but whilst that devastated the west coast of Wales it did not sweep up the Bristol Channel.

The flash storm of November 1929 swept away part of the retaining wall of the Cwm Clydach dam, which resulted in the cottages at Cwm Felin being flooded to a depth of three to four feet (this event features in The Neath Antiquarian Vol.1 p.88).  Many Neath people will recall more recent times when incessant rainfall has flooded the streets of the town; but whenever the wind picks up and storm clouds gather, remember those great storms of the past, and be thankful that today we can sit safe and dry in our homes and watch the worst the weather can throw at us - on the television.

[1] Cropped image from the title Page of an 1884 reprint of 'A true report of certaine wonderfull ouerflowings of Waters, now lately in Summerset-shire, Norfolke and other places of England..', originally printed in London 1607.

[2] 'The Great Storm November 26 1703 Wherein Rear Admiral Beaumont was lost on the Goodwin Sands... Beaumont's Squadron of Observation off Dunkerque'. No.25.