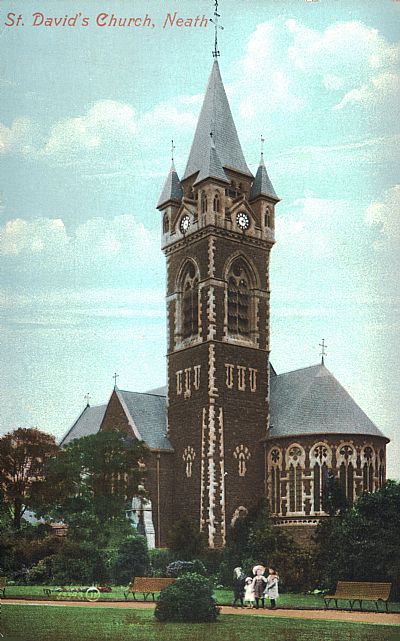 Early in 1864 the proposal for the building of a new church in Neath (led by the Rector John Griffiths) was gaining momentum with the site for building, together with a contribution of £200 to the subscriptions list, being made by Howel Gwyn.   Donations to the subscription list (which included £500 from Nash Vaughan Edwards Vaughan) were so good that on the advice of Mr Vaughan it was decided to engage the architect John Norton to submit plans for a new church[1].  The plans were ambitious – a large church accommodating 1,200 worshipers at an estimated cost of £6,400.  While the design met with general approval, there was considerable concern about the cost which appeared, to some of the community, to be beyond their ability to raise the necessary funds.  However, it was decided to proceed with Norton’s plans but, to begin with, only to erect the nave [the area of the church where parishioners, or congregation, sit or stand] and chancel [the space around the altar for clergy and choir], leaving the church proper to be completed by future generations.[2]

The original contract for the first phase erection of the church was awarded to Messrs Jones & Son of Gloucester, with the tower portion of the new church being discontinued after reaching a height of 60 feet and a temporary wooden roof constructed for its protection (as stipulated in the contract). The building had impressed all that saw it, but now some criticised the temporary works for giving the place of worship an unsightly appearance of having a stump attached to it.  One such critic was Mr Vaughan who offered 'to present the bride with a diamond necklace,' as he expressed his intention to fund the cost of the completion of the edifice.[3] Builders were sought and the tender submitted by Mr Alfred Bucknell was accepted.  He undertook to complete the work without removing the new organ erected in the chapel at the base of the tower.  In addition he also committed not to take any materials through the inside of the building during the construction work.  To achieve this, a massive scaffold was erected on the south side of the tower; the materials for the work being raised with chain and pulleys worked by [real] horse power.  A revolving crane, designed and constructed specially for the work was erected on the top of the scaffolding, allowing each stone to be lowered into its place.  Before work commenced a strongly reinforced waterproof platform was constructed (for the protection of the organ) in case any heavy stones or other materials should fall through the opening into the tower.  The tower was completed without injury to those engaged on the project.  However, in November 1868, a high wind caused part of the woodwork to come crashing down on to the roof of the chancel. The force of the falling debris broke away the rafters in the interior of the building and caused considerable damage to the upper part of the ornamental tiles.[4]

The tower was eventually completed in 1869, at a cost of £1,300, but without a clock or bells [it was intended that 8 bells and an illuminated clock would be included].[5]  However, it did have a wrought iron weather vane with a gilt cross and cock surmounting the spire, which was also fitted with a lightning conductor.  The tower’s benefactor, Mr Nash Vaughan Edwards Vaughan, died at Inchbae, Ross-shire, Scotland in 1868, before completion of the tower.  In recognition of his generous contribution a memorial tablet with the words 'Vaughan’s Tower' was fixed to the outside of the tower beneath the three single-light lancet windows.

Nash Vaughan Edwards was born in London on 22nd May 1811 to John Edwards and his second wife Sarah Parkin (widow of James Dalton).  Nash was probably named after his father’s relatives, John Nash the architect and William Vaughan of Lanelay Hall (near Llantrisant).  Nash’s formative years were spent in the company of other young gentlemen.  From the diaries of Lewis Weston Dillwyn (who was foremost among the political opponents of Nash’s father) we learn that Nash and John Dillwyn (Lewis’s eldest son) were friends and that Nash was a frequent house guest at the Dillwyn household.  Nash was educated at Eton College and Christ Church College, Oxford, where he enrolled at the age of 17.[6]  Following the death of William Vaughan at the Edwards' family residence in Regent Street, London, Nash’s father was granted by Royal Licence ' the use of the surname Vaughan in addition to and after Edwards.'  In 1832, aged 21, Nash Vaughan Edwards Vaughan, as he had become known, was appointed one of the Deputy Lord Lieutenants of Glamorgan.  The following year Nash’s father died at their Regent Street home and Nash inherited both the estates of Rheola and Lanelay.  Nash married Harriet Amelia, second daughter of Edward Swainston Strangways, Esq., of Alne Hall, Yorkshire in 1834.  The couple had two children together but sadly both died in childhood and were buried in St. Mary’s Church, Alne.   At the age of 27 Nash was appointed Sheriff of Glamorgan.  He was also a Justice of the Peace for Glamorgan, Brecon and Ross, and was on the Grand Jury that in 1843 prosecuted some of the Rebecca rioters.  There is plenty of evidence showing his generosity to good causes; he was a very liberal subscriber to the Public Reading Room in Resolven which opened in January 1856 and in 1865 he proposed 'a new and more commodious infirmary' for Swansea giving £1,000 towards its funding.  He built a private chapel at Rheola and provided land for a new church in Resolven.  In the parish of Neath (where he owned little or no property) he financially supported the new St. David’s church in Neath from its inception contributing £500 and a further £1,300 for completion of the tower.[7]

In February 1870 a storm caused considerable damage to the church over two days.  It completely stripped the roof near the tower and over the nave and partly stripped the roof over the chancel.  Coping stones were displaced and all the stone crosses on the pinnacles and gables were blown down and smashed to pieces.  The iron-work of the steeple weather vane was also badly bent and water poured through the roof which filled the organ pipes.  The church’s finances were inadequate to cover the repair costs and appeals to the congregation for increased offerings fell short of the necessary figure.  Then one Sunday in August the Rector informed the congregation that by an act of great generosity by a benefactor, residing near Swansea, the whole expense of repairing the tower would be paid for.[8]  It was John Dillwyn Llewelyn, of Penllergaer, the boyhood friend of Nash Vaughan Edwards Vaughan, who was the benefactor [John Dillwyn had assumed the additional surname of Llewelyn on the death of his maternal grandfather].[9]

Late in November 1871 a gas illuminated clock, paid for by Mrs Jennet Morgan, was 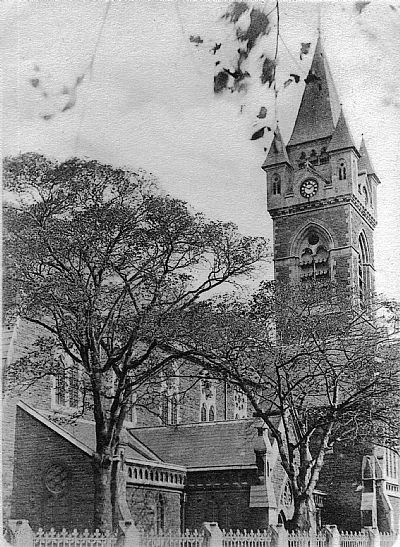 installed in the tower, but within two months gale force winds had damaged the centre glass of two of the clock faces.  In 1873 the Council took on the expense of illuminating the clock only to extinguish the illumination in 1876, since it had been condemned as useless at night.  In September 1873 as the clock was being wound, the wire rope of the striking weight snapped sending a 3cwt iron block smashing through the double doors of the belfry tower and then partially demolishing the swell box and pedal pipes of the organ. The vagaries of the British weather continued to play havoc with the church and Vaughan’s Tower.  In December 1891 what was described as a hurricane swept over the town causing further damage to the church roof.[10]  In 1893 'extra-ordinary repairs' to the tower and roof costing £1,600, were undertaken by Holway and Parsons of Swansea, necessitating a suspension of services.  At the start of the twentieth century the clock in the tower of St David’s was the greatest offender in the town when it came to punctuality.[11]  The Rector and Neath Council disagreed on funding for either the repair or replacement of the clock, so that by 1912 the clock had stopped working with its hands stuck at 12.50.[12]

A much larger clock mechanism (with bigger clock faces) and a carillon was installed as a War Memorial.  A plaque erected in December 1923 to the side of the South porch informs the onlooker thus; 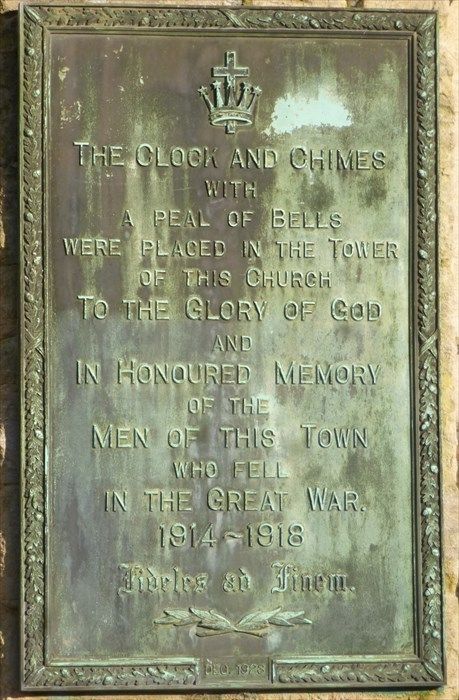 In 2013 a campaign was launched to raise £500,000 to cover the cost of repairs to the church tower, chancel and Lady Chapel.  The scope of work included re-roofing, timber repair, and the refurbishment of the rainwater goods; tower louvres; leadwork and the finial ironwork.  Also included were restoration work to the clock and clock faces and some work to the carillon. New capital works included the installation a ladder to improve maintenance access to the tower. 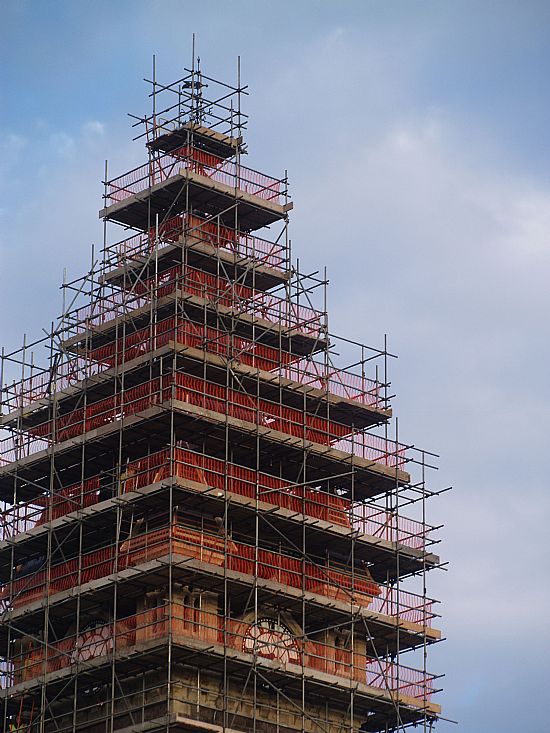 Probably the finest structure in the town and iconic of Neath 'Vaughan’s Tower', colloquially referred to as 'The Vaughan Tower', impacts in an unobtrusive way, the daily lives of hundreds of people.  Whether waiting for a bus, or just passing by, people glance up to check the time of day or hear the Westminster chimes marking the hour, half hour and quarter hour.

[1] John Norton had been engaged by NVE Vaughan to build a chapel overlooking the lake near Rheola House.  Later the foundations became unstable and it was ultimately demolished.- britishlistedbuildings.co.uk

[2] A History of the Churches in the Parish of Neath with Llantwit – Editor: Rev. WP Thomas

[9]  Lewis Weston Dillwyn Diaries – (refers to Dillwyn's son having his friend Nash, the son of John Edwards of Rheola staying as a house guest at Penllergaer).

[13] Chimes relates to the additional mechanism fitted to the clock in order to mark every quarter of an hour (Westminster chimes). Strictly there is no 'peal' since the bells are hung 'dead' and cannot be used for full circle ringing. They are a ring of bells installed as a carillon, which is a set of bells that may be played musically using a keyboard or other mechanism.