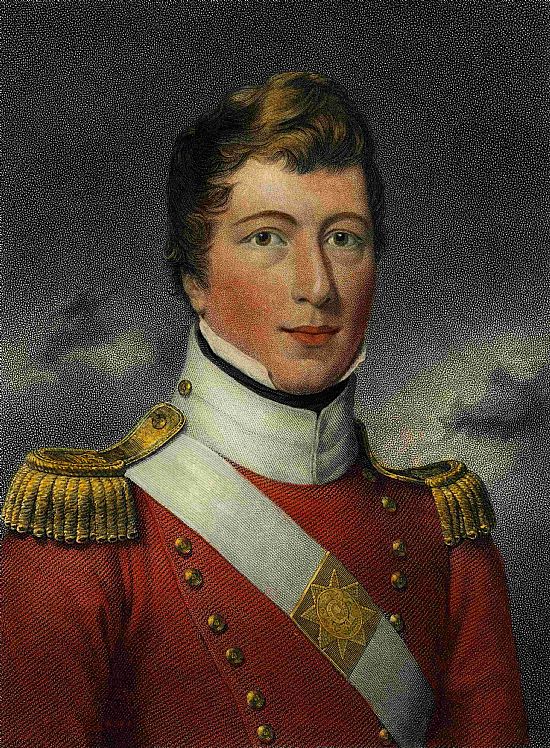 Reading the transcriptions of journals and memoirs written by his contemporaries, you are left in no doubt that Lieutenant-Colonel Robert Place was a highly respected officer by those who knew and served with him.  His first British Regiment was the 77th Foot which he joined in 1804 as a Cadet.[1]  Robert’s initial rise through the ranks in 1807 to Ensign and then Lieutenant was on merit, but from 1809 his promotions were by purchase [the practice of paying money to be made an officer].  By payment, a commission as an officer could be secured thus avoiding the wait to be promoted on merit or seniority.  In 1809 Lieutenant Place was made Captain and in 1819 a Major (both made by purchase).  Finally, in 1825 the unattached Major (on half-pay) purchased the commission of Lieutenant-Colonel of Infantry.[2]  Around 1826, a Light Battalion of infantry was formed by the amalgamation of light infantry from the Queen’s and other regiments of foot and it was Lieutenant-Colonel Robert Place, of the Queen’s, who was given command of this new battalion.   When the commander of the 41st Regiment died in August 1827, it was Robert Place who was appointed as the Regiment’s new commander - [this would be his last command].

A memorial tablet to him is situated on the north wall of the chancel of St. Catwg's Church.  The epitaph reads as follows: 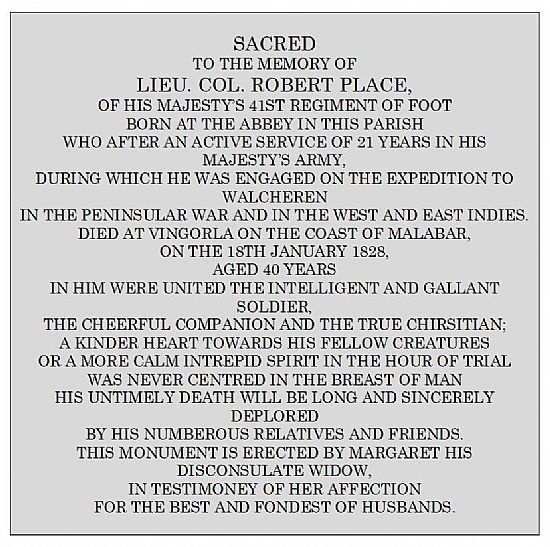 Robert Place was one of ten children born to John Place and his wife Sarah Dumayne; the couple married in Bassaleg, Monmouthshire in 1776.  John Place [Robert's father] was born in Cornwall in 1756 but his father [Robert's grandfather] also named Robert, had moved to Neath Abbey by 1758  to start and manage the smelting of copper at the Mines Royal Works, Neath Abbey. In the same year, his son Edward was baptised at St Catwg's.   A surviving ledger from 1795, kept by John Place, records that there were 38 furnaces at the works capable of producing 17 to 20 tons of copper a day; evidently the Mines Royal Works at Neath Abbey was a considerable undertaking by this time.

Prominent in every aspect of life in Neath and its district the Place family occupied a house at Neath Abbey for nearly 60 years before they moved to Cadoxton Cottage, a property with a 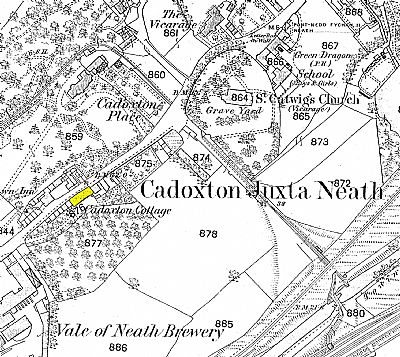 This was a most commodious property when compared to the two roomed 'back-to-back' or 'through houses' having two rooms downstairs and two upstairs, occupied by working families of this period. [3]     John Place, who had been a Magistrate and Deputy-Lieutenant for Glamorgan died in 1821 at Cadoxton Cottage aged 65 years.  His wife Sarah Place put the property up for lease, fully furnished, in 1826 and moved to Neath.  Having outlived three of her ten children, she died in Neath in 1829; her dying wish was to be buried with her husband at St Catwg's.

Robert Place served the majority of his career in the 77th Regiment of Foot (The Duke of Cambridge's Own) which was a line regiment of the British Army raised in 1787.  The regiment was given a county designation, becoming the 77th (East Middlesex) Regiment of Foot in 1807.  At the beginning of July 1809 Lieutenant Robert Place was appointed Captain of a Company of the 77th Regiment, by purchase - the previous incumbent having retired.  On 30th July, Captain Place was among some 40,000 soldiers and 15,000 horses, together with field artillery, to cross the North Sea and landed at Walcheren.   The Walcheren Campaign involved little fighting, but heavy losses from a sickness popularly dubbed 'Walcheren Fever' accounted for the loss of over 4,000 British troops [only 106 died in combat].  The 77th Regiment embarked for Spain in June 1811 for service in the Peninsular War under the Duke of Wellington.  It saw action at the Battle of El Bodon in September 1811, followed by the Siege of Cuidad Rodrigo and the Siege of Badajoz.  The 77th Foot then fought at the Battle of Bayonne in April 1814 before returning home in August that year.

Although we do not know how long Captain Place had known Margaret Elliott, or even where they met, they married in Clifton, Bristol on 13th October 1814, less than two months after the return of the 77th Regiment from France.  Margaret was the youngest of six daughters born to Philip Elliott and his wife Elizabeth Mundy; she was also the sister of Mrs Diana Ainsley Bowzer.[A]

In 1823 the 77th Regiment was posted to Belfast and in 1824 to Stoney Hill, Jamaica, where the Regiment (compared to other Regiments stationed in Jamaica) suffered the most from sickness – known locally as 'black vomit fever'.  The Army reported that in the ten months in Jamaica up to the 28th February 1825 the Regiment had lost two officers, two sergeants, 56 rank and file, three women and 18 children.  By June 1825 British newspapers were quoting reports in the Jamaica papers,

'.. that whilst our squadron on station healthy [Royal Navy] the troops had suffered from sickness – 77th Regiment had lost one hundred men and eight officers.'

Indeed in 1827, when the 22nd Regiment were garrisoned at Stoney Hill barracks the Regiment lost seven officers and 122 men to black vomit fever in two months.[4]  Sometime during his posting to Jamaica Major Robert Place was placed on half-pay and so, in May 1825, he purchased the Commission of Lieutenant-Colonel of Infantry.  Following a recruitment drive for Regiments stationed in India in February 1826, he was appointed to the Queen’s Royal Regiment of Foot (also known as the 2nd Regiment of Foot) and dispatched with the reinforcements to Bombay.  In September an expeditionary force against the Rajah of Koolapore in the Mahratta country to the South of Bombay, was put into the field.  The light company of the Queen’s with the light companies of the 20th and other regiments were formed into a light battalion, under Lieutenant-Colonel Robert Place of the Queen's and proceeded to Koolapore.  Place’s health was so bad that his doctor advised against active service and that Place should relinquish the command.  Typical of the man, he told his doctor “I go - [even] if I die on the road.”  Whilst engaged on this campaign he was appointed by the Commander-in-Chief in India to take command of the 41st Regiment of Foot, which was garrisoned at Koolapore and once again duty and honour took precedence over private considerations.[5]

Lieutenant-Colonel Robert Place of the 2nd Foot was appointed to the 41st Regiment of Foot on 30th August 1827, following the death of Lieutenant-Colonel Peter Latouche Chambers who died the previous day.  Weakened by a bout of cholera and suffering from a severe attack of liver complaint [cirrhosis of the liver], a kick from a horse confined Lieutenant-Colonel Place to his sickbed; meaning that he was unable to attend the accompanying ceremony on the surrender of the Rajah of Koolapore.  Now began the long and torturous return journey to Belgaum.  Setting off in the very early hours of the morning and travelling between thirteen and sixteen miles a day, the company reached Belgaum on 20th December.  Gravely ill, Place coined his last will and testament on 27th December, after which his doctors decided that should his condition improve he should be removed to the coast for embarkation to England.  With the death of two other officers diagnosed with liver attack, a decision was made to transfer him to the coast and so on 7th January 1828, at four o’clock in the morning, began the march to Vingorla which they reached on 12th January.  Suffering from fever, hot and cold fits and excruciating pain, Place lingered on until his death which was recorded as midnight on the 18th January 1828.  An autopsy, performed at ten that morning, revealed multiple conditions to his internal organs in addition to abscesses on his liver.  His body was interred with military honours on a hillside in an obscure part of the country with the service led by James Welsh of the East India Company.[6]

At the age of fifty, his wife Margaret remarried in 1832, but her second husband died 8 years later.  She lived out her remaining years with a companion and servant preferring lodgings to owning her own property, dying at Clifton, Bristol in 1872 aged 90 years. 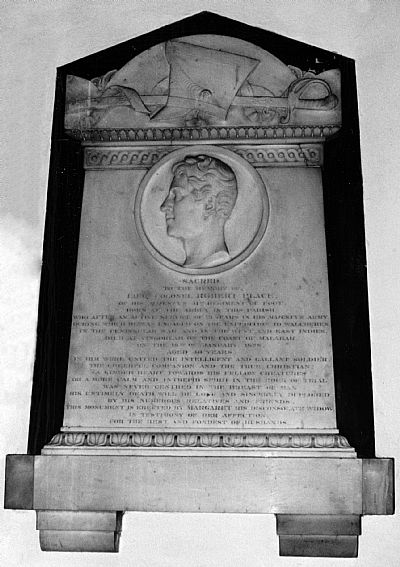 Catherine Place, the eldest of the Place children was born in 1779 in Neath Abbey (her parents John and Sarah were about 23 years old).  She married William Llewellyn, a surgeon of Brombil, Margam and Court Colman, Bridgend at St Catwg’s Church in 1818.  She died on 3rd November 1848 at Court Colman aged 69 years.

Thomas Dumayne Place was a solicitor, Mayor of Neath, Magistrate and Deputy Lieutenant of Glamorgan.  He married Mary Jones of 'Glanbrane', Llansamlet in 1807 at St Catwg's Church. He built the houses named 'Glyn Leiros' around 1824 and 'Ffrwd Vale' around 1841, where he died from cholera on 30th August 1849 aged 69 years.

John Place was a surgeon and militiaman who was appointed Second-Lieutenant and Surgeon to Major Thomas Lockwood’s Forest Volunteers at the age of nineteen.  After many years spent abroad, in the capacity of surgeon, his health deteriorated to such an extent that he was forced to return home.  After lingering more than two years in a state of suffering, he died at Cadoxton Cottage in 1823 at the age of 38 years.

James Place started his military carrier at the aged fifteen when along with his brother Robert, he also entered the Native Indian Army, in Bombay as a Cadet.  In 1812 he was promoted to Ensign [without purchase] in the 65th Regiment of Foot, that had been posted to India in 1811.  Over the next eight years he was further promoted to Lieutenant and then to Captain, both on merit.  At the age of 35 Captain James Place was listed by the army as being on half-pay.  He remained on half-pay until his death in 1847 at Cheltenham, at the age of 58 years.  His body returned to Neath and was interred at St Catwg’s Church on 2nd January 1848.

William Place was a volunteer who also received promotion in 1812 to the position of Ensign with the 77th Regiment of Foot, which was then serving in Spain.  In October 1814 William was promoted to Lieutenant [again on merit], but within the space of three months he was placed on half-pay.  William died in Portpool Lane, Holborn, in 1830 at the age of 39 years.

Edward Holden Place was a surgeon who lived at Maesyberllan House, near Resolven.  Although he had one son (Thomas Holden Place), with his servant Joan Morgan, he remained a bachelor.  Edward died in 1867 at Maesyberllan at the age of 74 with the proceeds of his estate (which amounted to £28 2s 6d) administered by his nephew William Llewellyn of Court Colman.

Sarah Place was born in 1795 and was the second daughter to be given this name (the first Sarah having died in infancy in 1785).  She first married William Walter Jones of Gurrey, Carmarthenshire, in 1817 and the couple had two children before William’s death in 1828.  She remarried in 1833 to Henry Carnegie Carden in Cheltenham and shortly after the couple moved to Paris.  It was here that her daughter’s marriage took place at the house of the British Ambassador in 1836 and where in 1865, Henry took out a patent for 'an improved metronome or apparatus for measuring intervals of time.'  Henry died a widower in Paris in 1886.  In the absence of a death of burial record for Sarah Carden at present, it is likely that Sarah also died in Paris.

Ann Place was the youngest of Robert’s siblings, died 'after a painful, lingering illness' in 1817, at Cadoxton Cottage aged 20 years.

[A] Diana Ainsley Bowser and her husband move to Tynyrhoel, Tonna, in or about 1807 but her husband’s circumstance led to a move to Briton Ferry where, in March 1814, at the age of 38, she died in child-birth leaving 10 children to be cared for.

The portrait of Robert Place from the Anne S.K. Brown Military Collection is by permission of the Brown University Library - https://repository.library.brown.edu/studio/item/bdr:227386/