WHO WAS WILLIAM GRONOW?

Grafting onto the Family Tree

We know a great deal about William Gronow but there has been speculation about his family origins ever since one his sons rose to fame or infamy.

William Gronow, 1771-1830, lies buried in a very large grave at Cadoxton Church.  In fact, it is probably the largest grave in a very big churchyard.  The grave measures 4 metres by 5 metres yet he is the only person buried there. 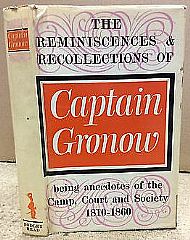 His list of achievements goes on and on:  surgeon, apothecary, man-midwife, banker, portreeve, colliery owner, land owner, property owner in the town of Neath, magistrate, deputy lieutenant, etc, etc..  He was married twice and had three children.  Through his first marriage he had a grandson, Gronow Davies, who was one of the first to win a Victoria Cross for action in the Crimean War.  His eldest son, from his second marriage, was Captain Rees Howell Gronow, soldier, failed parliamentarian, author, dandy and friend of royalty; his 'Reminiscences…' made him a celebrity in his day and his accounts of Waterloo gave him a kind of immortality even though he ended his days a pauper.  The younger son, Reverend Thomas Gronow, also gained some notoriety for the problems he presented during his incumbency at Cadoxton-juxta-Neath between 1821 and 1834.  There is an excellent article about him in Morgannwg L1, written by Rev. Roger Lee Brown.

Nowhere, however, has there been printed any proof positive of William Gronow's ancestry, but that has not stopped a great deal of speculation.

When William Gronow died in 1830 The Gentleman's Magazine made no reference to his family's illustrious past.  However, by 1862, these fables start to emerge. 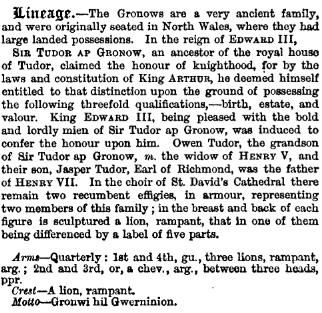 Burke's Landed Gentry of 1862 set the seal of approval on the family when referring to the Reverend Thomas Gronow of Ash Hall and speculated that the Gronow family 'was a very ancient family originally seated in north Wales where they had large landed possessions.'   A knighthood and a relationship to the Tudor royal dynasty are mentioned, as well as links to eminent relations in Pembrokeshire.

The Gentleman's Magazine of 1866, reporting the Captain's death, spoke of him being of 'an ancient Welsh family'; and Roger Lee Brown continued in the same vein stating that William Gronow 'seems to have belonged to a cadet branch of the once influential family of Gronow'.

All of these lineages seem to emanate from the introductory chapter to Volume 1 of Captain Gronow's book about himself, published in 1862, which gives details of the family claims to ancient ties.

The Welsh have always been proud of their ancestry and many books have been written about the genealogies of the princes.  In Cadoxton church are plaques created by Philip Williams of Dyffryn which are believed to present the longest family tree in Wales.  On there you will find Iestyn ap Gwrgan last prince of Glamorgan (said in the Gwenllian Chronicle to be the worst prince ever seen in Wales.), kings of north Wales, Gwent and Dublin and even Old King Cole together with a host of other characters from Welsh history [never let the truth stand in the way of a good story]!  Iestyn ap Gwrgan is said to have had 13 children and almost anyone living in south Wales in the mid-nineteenth century might claim descent from him.

Captain Gronow told a good tale.  He was regaled in the courts of England and France and his fame as a raconteur meant that when he published the four volumes of his 'Reminiscences…' between 1862 and 1865 it was a best seller.  Perhaps he would not have been so popular in certain quarters if it had been known that his grandfather was from humble origins.  Perhaps hints at illustrious ancestors were his way of getting round the problem [nothing concrete, mere suggestions]. 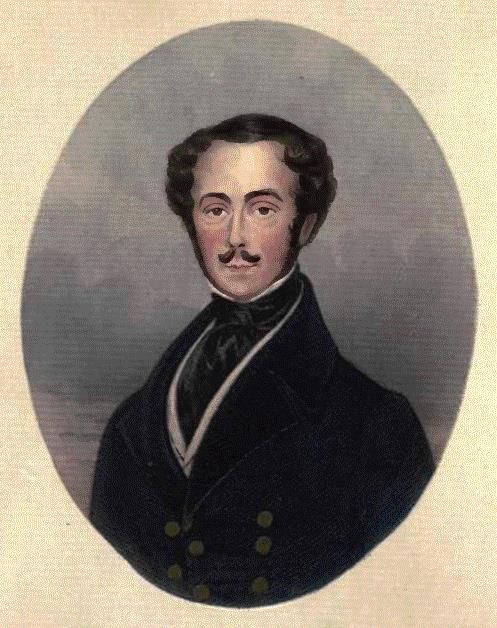 Captain Rees Howell Gronow; one of the most celebrated dandies

New evidence has now emerged which throws doubt on all these grand connections.

Lewis Herbert was a joiner/carpenter from Cadoxton who had built up a substantial property portfolio in the town of Neath.  By the time of his death around 1821 he owned the freehold on several properties in Wind Street and also had the leasehold on five properties in High Street.  In his will[1] he does not mention a wife or any children and leaves all his wealth to two main beneficiaries.  One is William Herbert Elias who was a tallow chandler in High Street and was probably a nephew.  The other was William Gronow, then of Court Herbert, was the greater beneficiary, being left all the freehold properties.

Lewis Herbert's wife, Elizabeth, is named as a 'life' in an indenture dated 1813, referring to properties in High Street and Wind Street, Neath[2].  Her age is shown as 66.

The link between Lewis Herbert and William Gronow is found in the marriage at St. Thomas' church on 23rd June 1788, of Lewis Herbert, widower, and Elizabeth Gronow, widow, both of that parish.  Was Elizabeth Gronow mother or much older sister to William?  The answer to that lies in an earlier marriage, again at St. Thomas', on 22nd September 1770 between Thomas Gronow and Elizabeth Moore.  William [from his burial record] was born about a year later so there is little doubt that he was Elizabeth's son.  There is no reference anywhere to any other Gronow children so it is likely that Thomas Gronow died shortly after the marriage.

On the banns to the above marriage record[3] Thomas Gronow is shown as 'blacksmith', which is certainly not someone belonging to the gentry class.  Furthermore, he could not sign his name and instead made his mark.  It is likely, therefore, that it was Lewis Herbert who gave his stepson a first step onto the ladder and provided him with the means to gain an apprenticeship to become a surgeon.  There is no doubt that William Gronow rose to become one of the senior citizens of Neath by his own means thereafter.

It is still possible that the Gronows were descended from one of the noble families mentioned in Burke's Landed Gentry but in Wales, almost everyone with Welsh lineage is probably descended from one line or other of the fertile Welsh princes, so that in itself would not be unusual. Proof of such descent is, however, very rare.

What is most likely is that Captain Gronow embellished possible links to the family name and when put into print for his 'Reminiscences…' it became accepted as fact.  If indeed there was a link, then it is lost in the mists of time as there is no earlier record than Thomas Gronow's marriage in 1770.

Anyone wishing to research the Gronow name before his marriage might have problems since there is no record of him in Neath prior to that date.  The bondsman on the Marriage Bond was Thomas Rimbron 'of the parish of Llandaff'.  Bondsmen might be a relative or friend of either party so there is a possibility that the Gronow family came to Neath from the Cardiff area.

The lesson here is 'don't believe everything you see in print'.