GAOLS AND LOCK-UPS IN NEATH

The earliest goal in Neath was probably inside the castle.  The castle had fallen into disuse by the end of the fifteenth century but it was still shown as being used as a prison 1491-2.

The town hall or Guild Hall is first mentioned in the early 14th century and was probably situated in High Street (now Old Market Street). It was recorded to be in ruins 1491-2 but had been restored by 1542 when, apart from usage as a corn market and assembly room, it was also used as a prison. Such gaols were usually situated under the stairs leading to the assembly room above a colonnaded corn market.  This Guild Hall continued to exist until the new Town Hall (now known as the Old Town Hall) was built at Church Place in 1820.

Money was provided in 1724 (WGAS D/D Gn553) for ‘erecting a Gaol for restraining offenders’, but there is no detail of what or where any such building was placed.

The town’s population by the end of the century was 2,501 and there was an ever-increasing need for a secure holding unit for prisoners.  A plan was drawn up in 1785 (NAS B/N 13/7/1) for a new court building with five cells attached, but this never reached fruition. 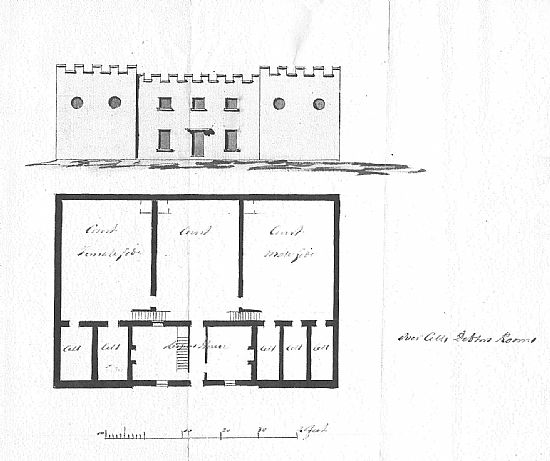 A ‘new gaol’ was finally built in 1807 in James Street.  This would have been in addition to the existing lock-up underneath the Guild Hall. 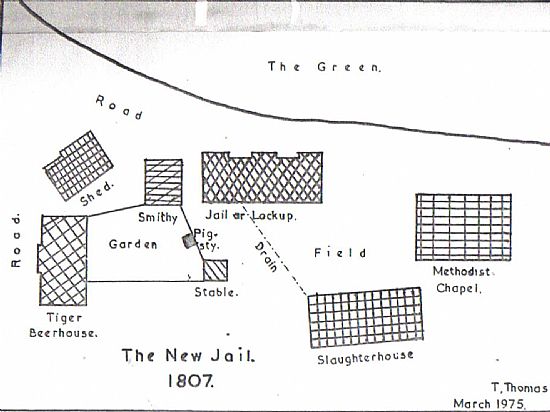 The 1833 Report of the Commissioners on the Municipal Corporations of England and Wales, mentions the goal in Neath ‘consisting of four rooms which they allow to be used by the county magistrates as a lock-up house.  The building is not suitable for its object, the rooms being exposed to view from the street and admitting of free communication with by-standers.’

In August 1841 the Glamorgan Quarter Sessions recommended that a joint (County and Borough) gaol be erected to be ready by the summer of 1842.  This was initially turned down by the Borough Council but they then changed their minds.  It appears to have been built on the site of the earlier gaol which is marked in the same place on a map of 1832.

The new gaol built in 1844 was built in the oldest and lowest part of the town; it was a sturdy building built of stone and abutting a street leading to The Latt. 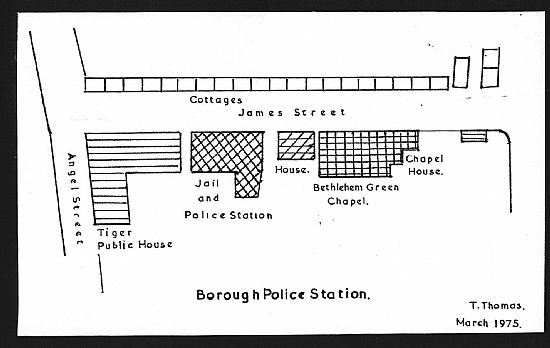 On the ground floor – No. 1 was a small room used as an office; No. 2 was a small bedroom for a single constable; No. 3 was a living room for a constable and his family; and No. 4 was an upstairs bedroom.

Prisoners were kept in two large cells upstairs.  To ensure that prisoners would not attempt to set the place on fire on purpose or by neglect, the floor of the cells was made of large stone slabs, measuring 5 feet long and 5 inches thick, and supported by iron joists. The stone slabs had open joists so that when prisoners committed a nuisance on the floor, it dropped down to the rooms below!

To add to the filth and smell, a drain ran beneath the building from a slaughter-house situated about 100 yards to the rear, and all the filth flowed downwards towards the station.  The offal that was not taken away were buried in the adjacent garden and a most offensive stench came from there, especially in the hot summer months.

The window of the single bedroom opened into a stable yard where pigs were kept and pig and horse manure piled up in heaps and gave off and offensive smell.

The upstairs bedroom window opened into the smithy yard where dirt and smoke abounded. 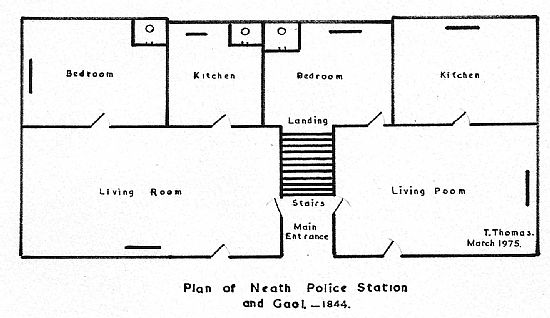 (This account is mostly taken from Captain Napier, Chief Constable of Glamorgan’s report to Quarter Sessions in 1849 but includes interpretations by NAS member Tom Thomas in 1975). 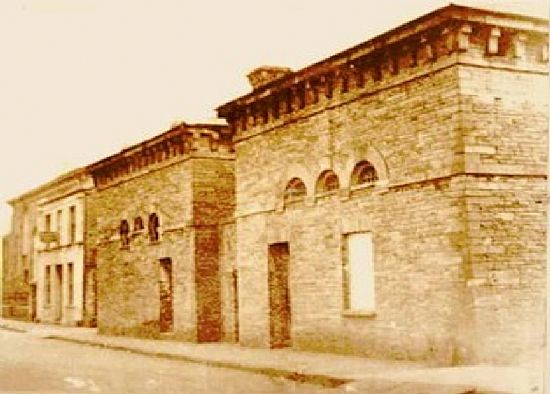 A report by the Borough Surveyor, William Whittington, in April 1883 refers to the gaol in James Street.  The gaol was in a bad state and the Government Inspector suggested a cell being created on the ground floor to hold drunks.  Whittington stated that this would only be a temporary measure and a new gaol would be needed or the police grant would be forfeited.  The Council decided eventually to look at utilizing the old cells under the Town Hall.  Therefore, it looks as though the James Street gaol went out of use at this time.

The building in James Street was used thereafter as a transformer station for the town’s electrical supply and was demolished in 1940 when air raid shelters were erected on the site.

The County Police Station built in Windsor Road in 1862 had its own cells for prisoners.  The only reference to the standard of this accommodation appears in a newspaper report when the whole station was rebuilt in 1937.  There the new cells are said for the first time to have heat, light and a bell for summoning assistance and 'providing a quiet rest for anyone unfortunate enough to be detained.'

POLICE STATIONS AND COURTS IN NEATH

The first Borough constable in Neath would not have occupied a Police Station.  Most likely he just hung a sign above his front door.

The first Borough station and the first County Station were, as stated, in the James Street gaol.

In 1848 Constable William Rees applied for rooms in the Town Hall to be used as a Police Station.  This was probably due to the conditions in James Street.  The man who was allocated to live there, Thomas Owens, died due to cholera in 1849.

The Borough Police remained in the Town Hall until amalgamation with the County Police on 1st April 1947.

The town hall also housed a court room. It was described in 1850 (Hunt’s Directory) as ‘a spacious court… with an adjoining jury room’. 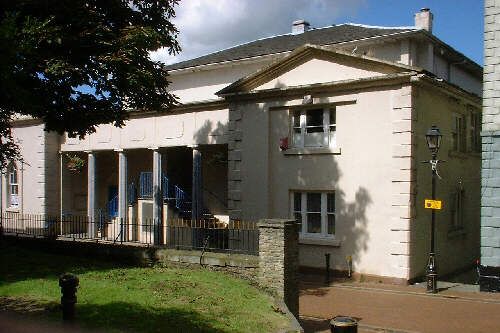 The old Town Hall, Neath - Home of the Neath Borough Police until 1947

The County Constabulary remained in residence in James Street until a new police station was built in Windsor Road in 1862.  This included court rooms though the magistrates complained that they had difficulty hearing the proceedings due to the noise of trains in the railway station opposite.

Work on the new Police Station was started in Spring 1862 and it opened the following year.  The new Station had two police courts – one inside the main building and the other above a garage at the rear of the premises.  The courts stayed there until 1977 when a new independent building was erected in the town (opened 3rd November 1977).  That premises closed in 2014 leaving the borough for the first time without its own magistrates’ court.  Whilst the court had been able to use the nearby police cells to house prisoners awaiting appearance from 1862-1977, the court 1977-2014 had its own cells complex.

The rebuilt County Station in Windsor Road opened in May 1937 and closed in 1996. 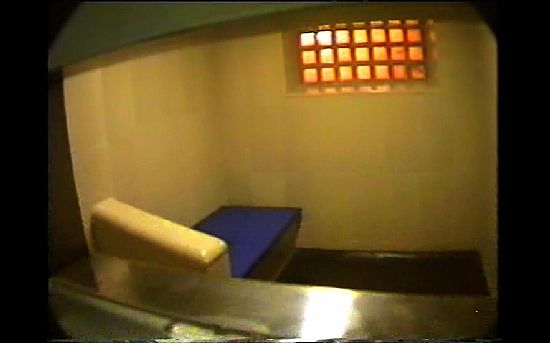 View through the hatch of a cell door at Neath Police Station 1996.