29 December 2019
The Case of the Missing Bank Clerk

When, on Monday, 23rd May 1904, Alfred Harger Scott left Neath to go on his annual vacation little did his landlady, or his employer, imagine that they would never see him again.  A man of many talents, he was an accomplished violin and piano player and collected gramophone records and musical instruments.  In fact, he was regarded as a bit of an antiquarian collecting old books, pictures and the like.  To his several landladies and customers of the Briton Ferry branch of the Capital & Counties Bank, he was a genial man held in high esteem.  However, his small circle of friends saw him as a man who could be quick-tempered and of uncertain moods – at times he would be delighted to see them and at other times his demeanour conveyed to them the impression that he wished they were the other side of the world.[1]  The eldest of five children born to Charles Scott, solicitor and his wife Helena Caroline Harger, Alfred was born on 27th June 1869 in the affluent London area of Primrose Hill.  As a youngster, Alfred attended the Grove Boarding School, in the village of Stonehouse, Gloucestershire.  In the 1891 census Alfred is recorded as working as a bank clerk in Ipswich where he took lodgings with the Spooner family; meanwhile his parents and his siblings were living in South Hamlet, Gloucestershire.  In or about 1894 Alfred took up a positon as a bank clerk with the Glamorganshire Banking Company at their Swansea branch.  While in Swansea he lodged in George Street and before he transferred to Neath he lodged at a property in Willow Place along with an electrical engineer and a solicitor.[2]

In February 1902 Alfred transferred to the Neath branch of the Capital & Counties Bank (who had acquired the Glamorganshire Banking Company in 1889) taking lodgings at 45 London Road, Neath.  The manager of the Neath bank was John Griffiths who had known Alfred for several years having been sub-manager at the Swansea bank before being promoted to the Neath bank.  Griffiths employed Alfred as an agency clerk to be based at Briton Ferry.  Alfred would leave Neath each morning for Briton Ferry carrying with him a cash book and the estimated cash required for that day's business.  He would return in the afternoon and hand over the balance to a cashier who would confirm the balance and agree with the entries made in the cash book.  Since his coming to Neath, Griffiths had noticed a change in Alfred.  Griffiths liked Alfred and the two men initially got on well together in spite of Alfred’s 'peculiar ways.'  Alfred had frequently visited Griffiths' home in Swansea where he played the violin with Griffiths' daughter; since coming to Neath, however, Alfred had only visited Griffiths' Neath home three times in two years and Alfred was not known to mix with the other bank clerks outside of business hours.[3] 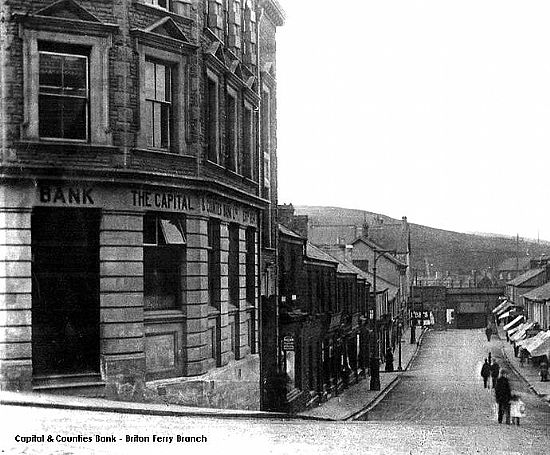 On Monday, 23rd May 1904, the day of his departure, Alfred settled up his lodging account, paying four weeks in advance and telling Miss Thomas (step-daughter of Mr Parker, the landlord, who was in America with his wife at the time) that he was due back in three weeks.  He told Miss Thomas that he had not quite made up his mind where he would end up – possibly Glasgow via London.  When asked if anyone was going with him he replied, “No. I've lived alone for years. I shall take my holidays alone.”[4]  Some ten days after Alfred was due back, reports of his disappearance appeared in the local newspapers stating that inquiries had been made by the bank and by Miss Thomas, but that they had been fruitless.  Over the coming weeks the newspaper reports began to reveal some hitherto unknown facts such as: Alfred had taken only sufficient clothing to cover his holiday leaving behind several suits of clothes; numerous articles of considerable value; that he was well supplied with money having received a substantial cheque from his father.  Left at his lodgings were his collections of violins, mandolins, guitars, a magnificent gramophone with hundreds of records and a number of valuable meerschaum pipes (unsmoked).[5]  As days passed new revelations grabbed the reader’s attention – after visiting Scotland Alfred might have subsequently crossed over to Amsterdam, and 'a gentleman who has had some connection with American liners and with whom Mr Scott was on friendly terms' informed one newspaper that “Mr Scott called upon me a few days before he left, and made inquiries with reference to rates from Liverpool to New York, the steamers running, times of departure, etc.  Mr Scott said he was making inquiries on behalf of a friend who intended going to America for a few weeks.”  The theory that Alfred never intended to return was put forward by one of Alfred’s friends.  Not only did he receive a postcard, signed 'Farewell – A.H.' but before Alfred went away a conversation had taken place between them.  According to this friend Alfred intended to go away for a time and had made up his mind 'to chuck music.'  He wanted his friend to accept his music, which his friend did on the condition that it was to be returned when Alfred came back.[6]  A letter sent to Miss Thomas from Alfred’s mother only confirmed that the family had no knowledge of their son’s whereabouts.  She [Mrs Scott] had understood that he was going to Scotland and the family were expecting him home for a few days on his return journey.  She was 'much puzzled what to say or do as to his things. If we get no news in a short while I will write you again and possibly come to Neath.'  Concern over Alfred’s disappearance was shown by one ex-landlady from Swansea, who came to Neath to make inquiries.  She met with a correspondent of The Cambrian stating that 'she knew Mr Scott very well and liked him very much, he being a genial and straight-forward gentleman.'  The correspondent told her that no one knew where he had gone, or where he was, and so the lady went on her way to Alfred’s lodgings in London Road. 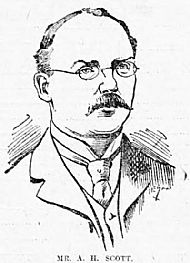 Newspaper interest into the mysterious disappearance of Alfred Harger Scott began to wane towards the end of June 1904 and on 2nd July 1904 what appeared to be the last article on the subject appeared in the Weekly Mail.  Then, on Monday, 5th September 1904, the Evening Express included the sensational account of the suicide of a passenger that had taken place on board RMS Campania, on 9th June 1904.  When George and Anne Parkes, the parents of Miss Thomas, returned home to 45 London Road on Saturday, 3rd September, after five months in America, they had a remarkable tale to tell.  They were passengers on board RMS Lucania[7] and when the ship passed the steamer Campania mid-ocean they overheard a gentleman speaking of a suicide that occurred on board the Campania when en-route for New York on 9th June.  This, briefly, is the newspaper’s account of the gentleman’s story, as told by Mr & Mrs Parkes: - 'We sailed from Liverpool on 4th June. On board there was a man who seemed very peculiar. At times he would maintain a morose reserve and at others he would join in the games going on.  On the morning of the 9th June, he suddenly left the smoke-room and I said to my companion, "That man is going wrong, I'll warrant.”  We left the smoke-room a few minutes later and went on deck. We had not been there three minutes before the man rushed up, brandishing a hatchet.  He was in a frenzy.  He shouted as he ran up and down.  “I feel I'm going mad. What shall I do?  What shall I do?” One of the crew caught hold of him, but he broke away and jumped overboard.  The liner was stopped, but nothing was seen of the poor fellow after.  He was a man of medium height, inclined to be stout.  He was bald on the top of the head, but had curly hair at the sides. He walked with a slight stoop and wore gold-rimmed glasses.  He was well dressed and seemed to have plenty of money.  His age, I should say, would be about 40.'  The description apparently tallied accurately with that of the missing bank clerk and further, the time scale was a fit.  Other newspapers headlined the narrative as 'Curious Resemblance' and 'Remarkable Coincidence.'

In the January 1913 Alfred’s mother died and her obituary stated that 'The chief mourners were: — Mr Charles Scott, Mrs Henry Knowles and Miss KH Scott (daughters) Mr Herbert H Scott (son), Mr Henry Knowles (son-in-law), Mrs HH Scott (daughter-in-law) Dr Wilkin, Mr WS Knowles…'[8]  No mention of Alfred was made, but his brother and three sisters were accounted for.  However, when in 1921 Alfred’s father (Charles Scott) died; his obituary stated 'She [Mrs Scott] predeceased him in 1913. There was issue of the marriage two sons (Mr Alfred Harger Scott, who is abroad and Mr Herbert Harger Scott) and three daughters (Mrs Henry Knowles, Mrs Yates, and Miss Katharine Harger Scott), to the sympathy...'[9]  So Alfred was not the passenger who had allegedly committed suicide aboard the RMS Campania![10]

In fact it would be another eight years before Alfred departed this life.  He died on 29th December 1929 in Toronto General Hospital, at the age of sixty, a single man.   His Death Certificate records the names of both of his parents, his occupation as a Violin Maker and that he was in hospital for three weeks before his death.   Alfred Hager Scott was buried on 2nd January 1930 at the Scarborough Lawn Cemetery, York County, Canada.

[5] A meerschaum pipe is a smoking pipe made from the mineral sepiolite, also known as meerschaum.

[7] RMS Lucania - was scrapped by Thos. W Ward after being damaged by fire at Liverpool on 14th August 1909

[10] RMS Campania was built for the Cunard Line by Fairfield & Co. in 1839. Sold to the Royal Navy and converted to a seaplane carrier.  Whilst in the Firth of Forth, severe weather caused her to drag her anchor and after striking the bows of the battleship HMS Revenge she later foundered.