Who was Mario Raggi?

Asking this question would probably bring few positive replies from the inhabitants of Neath, yet many of us, both past and present, will have passed his name and some of us on a daily basis.

Mario Raggi (1821-1907) was born at Carrara, a city on the south western coast of Italy, famous for its white and blue grey high quality marble. Here he studied Art at the Academia della Belle Arti, firstly under Pietro Marchetti and later under Ferdinando Pellicia.  Having won all available prizes he went to Rome to further his studies. He further established himself as a sculptor of note leading to his busts being exhibited at the Royal Academy in 1878.  Following this he moved to England in 1880 setting up his North London workshop in Cumberland Market.

His work gained in popularity leading to him being awarded some major commissions for public commemorative memorials.  There are very many pieces of his work in existence, among the most well-known are;

Maybe it was the Vivian statue that influenced Neath's civic fathers to choose Raggi to immortalise Howel Gwyn. An appeal was launched by JTD Llewellyn to cover the £1.100 cost and contributions were received from the landed gentry, businessmen, clergy and the general public.  The appeal raised £655 (a shortage of £445) and a further appeal was made to the more affluent subscribers to make a further contribution. [D/D SB 4/1029].  The sculptors' finished work was cast by H Young & Co. who were described as 'England’s first major art-bronze founder of modern times', at their Pimlico foundry (the firm that although diversified, still exists). 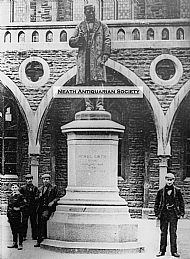 The memorial complete with its plinth of polished grey granite was unveiled with due pomp and ceremony on the 26th September 1889.  Whether by design, or by a quirk of fate, in its original location, the pose struck by the bronze has Gwyn’s outstretched finger pointing towards his birthplace, which at that time, stood opposite.  The position of the statue caused controversy right from the start, since it was thought it would interfere with the passage of horse-drawn carriages. In 1960 when plans were well underway to build a Civic Centre at the Fairfield the executors of the Dyffryn Estate agreed that it would be unreasonable to hold the Council to covenants made over 70 years earlier considering that the Gwyn Hall would no longer serve its original purpose as the Municipal Buildings.  Although not a condition, the family suggested that the statue to Howel Gwyn be resited within the precincts of the Civic Centre with a plaque stating that the new building had taken the place of the Gwyn Hall as the Municipal Headquarters. [B/N L 1/3].  Yet it would stay at the Gwyn Hall forecourt until 1967 when the statue was moved to Victoria Gardens due to a proposed road-widening scheme that never happened.  The method of removal was unrefined by today’s standards, but it survived without breakage which is a testament to the quality of Young's casting. 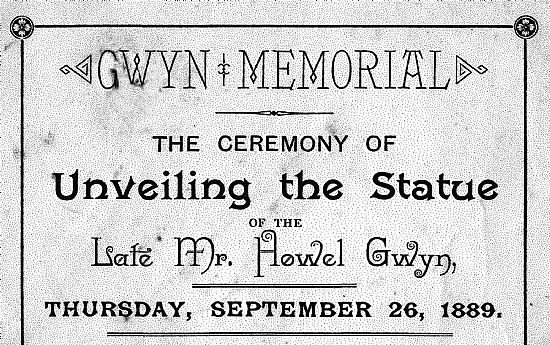 Ironically, but not unusually for sculptors, Mario Raggi's own memorial is a plain slab at West Norwwod Cemetery in London.

So, in answer to the question - Mario Raggi is the sculptor who produced Neath's only commemorative public memorial of a civic leader.