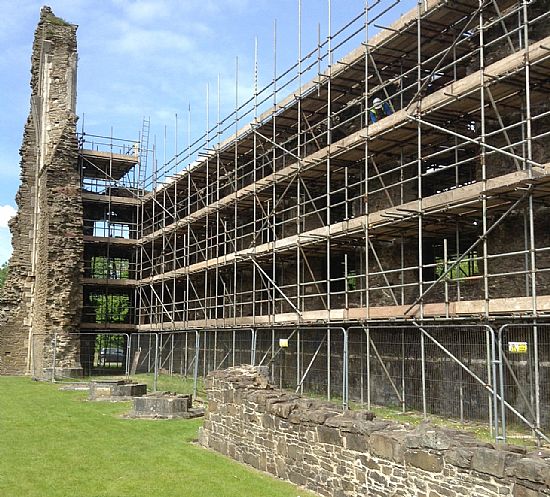 On a sunny May morning at the invitation of Laurence Toole of Cadw, members and friends gathered at Neath Abbey.  Over the past many months the area surrounding the Tudor mansion has been fenced off from the public while the Cadw team worked on the flat roof above the undercroft making it weatherproof once more.   The alignment of the roof was has been altered slightly so that the rainwater now runs off towards the Southern end, with the exterior  walls repointed with special lime mortar, similar to what would have been used in Mediaeval times.

The interior of the undercroft had suffered considerably from water ingress resulting in the walls and ceiling becoming covered in green algae from the dampness.  The walls at roof height were treated and repointed before stone slabs were placed on top to prevent future water penetration.  Although this is a somewhat controversial method for 'purists' it is deemed to be the most effective method and has been used in other areas of the monument with success. 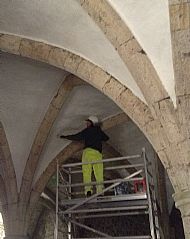 The team was busy on scaffolding inside the undercroft and all visitors were required to don hard hats before entering to view the transformation.  The walls and ceiling vaults were dry and clean once more and a lime wash was being applied between the vaulting ribs making the whole room much lighter once more.

The remaining tiles from the floor of the abbey church are still on display, though they need cleaning up and the pieces stone tracery and stone bosses are stored on pallets.  The stone effigy of Abbott Adam of Carmarthen lies amongst it all ....well his 'body' was to be seen, though his 'head' couldn't be found at that moment!

All areas of the ruins have been surveyed and declared structurally sound following the insertion of bronze supports into the walls, where necessary.

Laurence took us to the abbey church, where scaffolding covers the wall of the North aisle.  Here men were busy repointing the stonework and placing stone slabs on the top of the walls (again to help alleviate damage from water penetration) and removing the foliage which has grown. They anticipate that nothing will need to be done on these areas for at least another ten years. 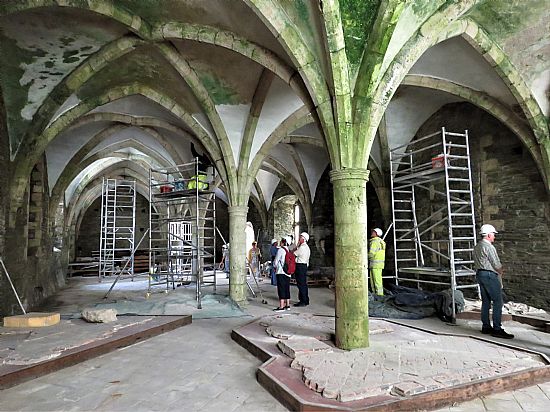 At last the abbey looks cared for once more. We are most grateful to Laurence for his continued contact with the Society and to be invited by him to meet the team, who are ensuring that the Abbey will open to welcome visitors for years to come.