21 May 2019
CADOXTON AND THE MUMBLES RAILWAY

CADOXTON AND THE MUMBLES RAILWAY

The grave of the man who created the world’s first passenger railway has been found in Cadoxton churchyard. 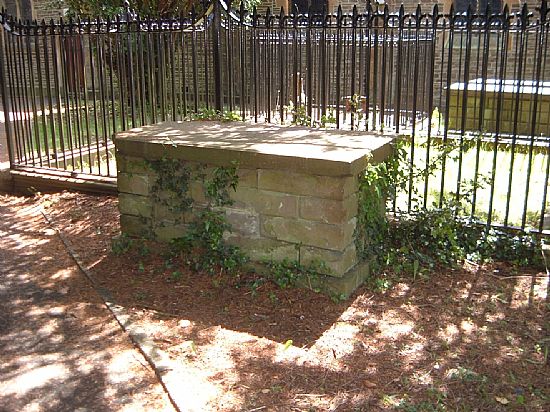 In 1807 the world’s first passenger railway started operations between Swansea town and Oystermouth.  It was the vision of one man, Benjamin French, who was a director of the company that had originally set up a tram road to carry quarried stone to the town.  So who was Benjamin French?  Well, very little has been written about him. He is mentioned only vaguely in documents associated with the railway and until today has remained something of a mystery man.

Now a grave has been discovered in the churchyard at St. Catwg’s, Cadoxton, in the name of Benjamin Thomas French, gent (1771-1843) who would appear to be the railway man himself.

In 1804 an Act of Parliament allowed the creation of a railway for the transportation of quarried material from Oystermouth to the harbour at the mouth of the River Tawe.  That railroad began operations two years later and one of the directors is named as Benjamin French of Morriston.

Within a year Benjamin French had a vision.  He believed that the picturesque scenery of Mumbles Head would be an attraction to travellers.

French’s proposal was to convert the iron carriage used to carry limestone into a wagon suitable for passengers.  In order to go ahead with his plans he agreed to pay the quarry company £20 a year in lieu of tolls, for the privilege.  He supervised the engineering of the work and set up a suitable time-table and on the 25th March 1807 the first passenger train ran.  It was an immediate success; so much so that the quarry company increased its rental terms to £25 per annum.   Partners in the enterprise were Simon Llewellyn and Benjamin Rose; the sister of the latter married French's brother, James. 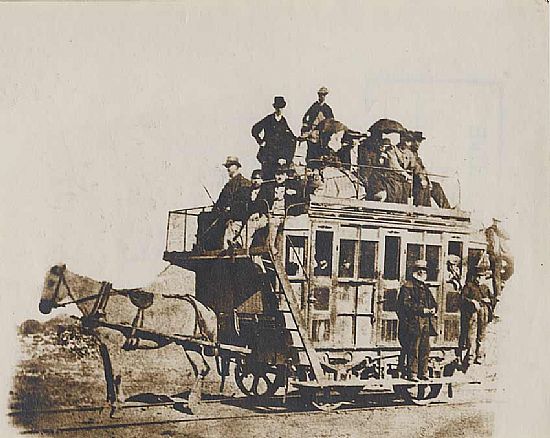 Mumbles Railway c.1865 - (this was a larger version of the original carriage)

The track itself was five miles long and passengers paid one shilling each way for the pleasure of a ride in a twelve-seater, horse-drawn carriage.  Steam power was already in use but an experiment with a steam engine found that the track buckled under the extra weight and the idea was abandoned.  Horses were not replaced until 1877 (on sturdier rails).

The Scottish author Elizabeth Isabella Spence wrote a letter dated 3rd August 1808 in which she extolls her delight at this new mode of travel:

'I never spent an afternoon with more delight than the former one in exploring the romantic scenery of Oystermouth.  I was conveyed there in a carriage of a singular construction, built for the convenience of parties, who go hence to Oystermouth to spend the day.  The car contains 12 persons and is constructed chiefly of iron, its four wheels run on an old iron railway by the aid of one horse, and is an easy and light vehicle.'

'It travels over an iron railroad at the rate of five miles an hour, and with the noise of twenty sledge-hammers in full play.  The passage is only four miles but it is quite sufficient to make one reel from the car at the journey’s end, in a state of dizziness and confusion of the senses that t is well if he recovers in a week.'

We know that French hailed from Morriston but his family origins were probably in Gower as his brother, James, who was a witness to Benjamin’s marriage and a named life on Rhyddings estate deeds, farmed at Kilvrough between 1801 and 1817 and another brother, John farmed at Limpit near Southgate.  However, the French family were not from Gower.  The earliest information about Benjamin is that on 2nd September 1801 he purchased the lease of the Rhyddings Estate near Neath from Lord Vernon.    This included ‘Rheedings’ Farm and grist mill and two public houses named in later deeds; the Travellers’ Rest and the Coopers Arms.  Unfortunately this purchase again begs the question, why?  What was his connection with Neath?  Where did his wealth come from?  At the time of this agreement he was living in Llansamlet.

The 1801 deed contains the names of several people including John French of [Great] Yarmouth and it is here that we find the family roots. Benjamin was baptized at St. Nicholas' church, the eldest son of Benjamin and Mary French.  All of the French brothers (Benjamin, John, James and Samuel) moved to the Swansea area in the nineteenth century.  Samuel died in Llansamlet in 1801.  Benjamin senior was a mariner at the time of his marriage to Mary, so there is no clue as to the origins of the family fortune.

Another mystery is his marriage on 24th November 1804 to Anne Evans of Danyrallt, near Llangadog, Carmarthenshire.  Llangadog is a long way from Swansea and even further from Neath.  What were his links to that place?  Certainly his wife was well off as Danyrallt was a substantial dwelling and her father Thomas Evans probably regarded himself more of a gentleman farmer.  All of their ten children, with the exception of the eldest, were baptised in Llangadog and the records show Benjamin variously named as ‘gent’ or farmer at nearby Ynysmoch.  (Surprisingly none of his children produced a grandchild).

Sometime between 1832 and 1835 Benjamin French moved to The Parade in Neath where he died on 8th November 1843 and was buried in Cadoxton churchyard.  Why did he move to Neath?  His second eldest son, James, had qualified as a surgeon at St. Guy’s in London.  In June 1835 he applied for a position at the Swansea Infirmary and on failing to obtain that position he too settled in Neath, but he probably arrived after his father.

James was active on the Neath Council being twice mayor in 1851 and 1852 when fears of cholera encouraged voters to seek a solution from a man qualified to help them.  He retired to Cheltenham in the 1860s and was buried at Bath Abbey in September 1890.

Two other sons were active in Neath.  Paul Evans French had a shop in New Street and advertised as a ‘druggist, chemist, bookseller and stationer.’  He died at the age of 28 in 1847 and left the business to his youngest brother, Benjamin.  The latter did not stay in Neath long and by 1851 was a surgeon at Cardiff goal.  However, he was not the prison surgeon but rather a prisoner! One wonders what the reason was for his incarceration. Benjamin died at Bourn, Lincolnshire in 1861 when his profession is recorded at surgeon.

Although this article throws a light on the man who created the world’s first passenger railway, it also raises many more questions.  Benjamin French obviously was a wealthy man with sufficient money to buy a small estate, run a farm, invest in railways and to educate his sons.  His eldest son, Thomas, went to Oxford before being ordained (probably as a Baptist mMinister).  Benjamin’s brother, James, farmed for a short while at Park Farm in Kilvrough before turning to a career as a flour merchant in Swansea and lastly becoming Guardian of the Poor in Swansea.  Whilst a respected person he did not have his brother’s means; perhaps as the younger son he inherited less.  Regrettably historical records never supply all the answers!