In light of the 2014 horrific fighting in Gaza please pray that the ceasefire holds.The Trust will endeavour to keep supporters updated with news of the Lighthouse School ,and how the staff and children are coping as they get back to some level of normality. Anglican run Ahli Hospital, the YMCA and churches (Baptist, Roman Catholic and Orthodox) are all in Gaza City.  Entry from Israel is from the north at Eretz. The "tunnels" are between Egypt and Gaza at Rafah.The boundary for Gazan fishing boats is restricted to 3 miles:Life in Gaza is difficult. "Gaza is like a large prison camp" commented Prime Minister Cameron .

Much of the Gaza strip was destroyed and damaged in the 2014 war and much of it remains so due to lack of bulding materials and money. 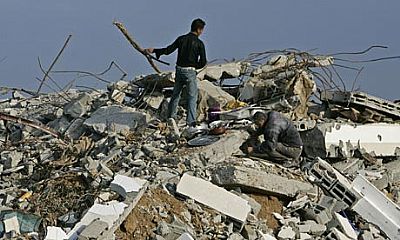 The Trust offers considerable support to the Lighthouse School in the Zeitun area of Gaza.

To understand how the School was founded in 2005, and something about its ethos, find below an audio clip. In it the Director explains in a radio interview how "faith" can reach into deprived families lives, and give children a good education in a caring Christian environment.The audio clip was taken from  Bethlehem Voice Radio in 2013.