Update on the Eigg runic stone

in October 2016, an islander was busy checking the drainage next to his house when he found amongst other boulder stones, one stone which appeared to have an inscription on it. Intrigued by the fact the inscription did not appear to be written in plain English, he reported the find to the Eigg History Society. 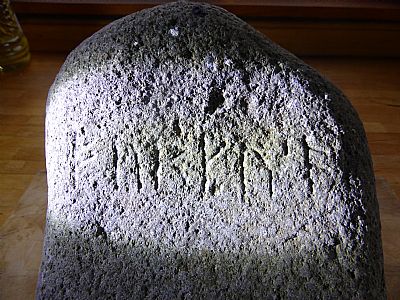 Camille Dressler, Eiig's local historian,  came with her partner Brian and together, they concluded that, yes,  there was a inscription, and that the characters appeared to be runes. The find was duly reported to Historic Environmnent Scotland.

Furkusal inscription found to be puzzling

Historic Environment Scotland circulated the inscription around a number of experts. The conclusion was that they were unconvinced that the stone is a genuine runic carving and erred towards it being a modern inscription.

Here is what Henrik Williams says in his runic blog at the University of Uppsala.

"The first reading was furku.al or furkusal, neither of which is recognizable linguistically.

Britain’s leading runologist, Prof. Michael Barnes, quickly established the correct reading, furkuson, which he thought could be a rendering of the Gaelic last name Farquharson. The inscription might instead be read furguson since there may be a dot in the pocket of the k (half way between the tips of the staff and the twig), turning it into a g-rune. A field runologist will have to confirm or reject that when examining the inscription. Anyone familiar with Viking runes would know that k was used for both k and g, so the name is likely Furguson either way.

Furguson, the son of Furgus (derived from Gaelic Fearghus) can also be spelled as Ferguson or Farguson, for example. People named Ferguson can be referred to as Furguson, as is the case with Duncan Ferguson who inhabited the house for a time where the new runestone was found, but who knows nothing about its origin. His family members have been the only Fergusons on Eigg for the past century or more, according to Camille Dressler, chair of the Eigg History Society. She also reports that the monument consists of “a block of columnar basalt  – a very common stone on Eigg”. “Having done a bit of stone carving myself in my time”, she continues “I can assure you it is not a stone which is easy to carve by any means!”

Expert opinion err on side of modern inscription

Is the Eigg stone from the Viking Age or is it modern, probably carved in the last hundred years? asks Henrik Williams.

"Michael Barnes advances a number of reasons why the inscription is not likely ancient:

Barnes concludes: “If my thought be accepted, we have a parallel in the kiorki younk (i.e. ‘George Young’) inscription from Bracadale, Skye.”

My own conclusion certainly support that of Michael Barnes’s," explains Henrik Williams.  "Just having a personal name on a runestone is possible, but never just a last name as in this case. Also, like Michael Barnes I cannot find any Viking name or even word that could hide under the runes furku(son).  Finally, the shape of the r-rune is unexpected.

That we cannot (yet) identify the actual carver does not by itself show an ancient origin.

Science deals in probability, not possibility. That we cannot (yet) identify the actual carver does not by itself show an ancient origin. As very little speaks in favor of the Eigg stone being a Viking Age inscription the probability is that it stems from the last century or so. This may disappoint some, but should surprise nobody. Runic inscriptions are constantly produced in our times, as proven by the Bracadale inscription just mentioned. Michael Barnes in his Runes: A Handbook(2012) mentions a number of modern inscriptions in Britain, Scandinavia and the United States (pp. 135-142). Last year Martin Findell published another recent inscription from Portormin Harbour in Dunbeath, Caithness, found in 1996."

The stone is now awaiting closer inspection. Eventhough it appears likely to be modern, its origins is still a mystery.

"I just dont buy this Ferguson connection " concludes Camille, . "There must be another explanation. Of course it would be great if someone came forward and owed up to having carved the runes.We hope that the publicity around the stone in the press might help with that. But what is sad is that there is no one left in the Campbell family to tell us where the stone might have come from.The family who occupied the house after them knows nothing about that stone, which we thought at first might have been buried in the land surrounding the house, dug out of the garden patch and conveniently dumped in the drains.

If it is a modern inscription, this might not be the case and it could have been found on the shore, due to the appearance of the stone, which looks as it is has been smoothed out by the action of the sea. Certainly, on Eigg we have evidence of many sea-rolled boulders used as grave markers, in the past as well as recently.  The way it stands on its broken base makes it a convenient stone to carve, although it would be hard work to carve anything on this type of stone. It would not be however the first graffitti found on Eigg, there are a number of inscribed stones on th eisland, but none with runic letters!

One clue however might be provided by the list of early Christian martyrs on Eigg: among the list of the monks killed in 617 alongside St Donnan, is a monk by the name of Fergusan.