You are standing at the highest point in Warwickshire, on a site that was probably the earliest place of worship in the county; from pagan times through the Christian conversion in the 7th Century. 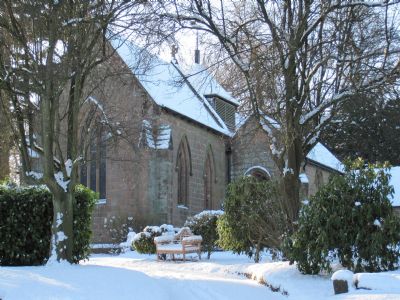 There are no early records of priests but the first recorded advowson was granted to Corley Manor in 1190.  The Church was appropriated by Coventry Priory and remained so until after The Dissolution in the 16th Century.  The Church patronage passed to the Church Society at the end of the 1920's.

You enter the Church through an impressive late twelfth Century Norman doorway.

It is believed that if you look through the keyhole you can see the weather vane on the top of the old St Michael's Cathedral in Coventry.

Originally, the Nave was much smaller.  It was extended in 1885 with the original walls built of red sandstone rubble, dating from the 12th Century.  The ceiling is made of wood.  In 1905, it was completely restored by a local tradesman, who's final bill came to £19.16s.9½d.

The most striking features of the Nave are the arches that lead to the Chancel and the North Aisle, as they open up the whole interior.

The North Aisle is of late 12th Century origin, although what you see now dates from the mid 14th Century when it was rebuilt and widened.  It is built of red sandstone squared rubble, although at the top of the north wall, there are several courses of 18th Century brickwork.

Up until the 1960's, this door led directly outside.  This explains its construction as the bolts go stright through the stone.  It has also been noted how odd it is that the inner and outer stone arches of the doorway are of quite different styles.

Wall Painting above the Vestry Door

Above the doorway, is a patch of plaster which is the remains of a wall painting of St. Christopher and the Christ Child.

It has recently been preserved and the faint outline is just visible.  The date is unknown, but it was common practise in medieval times for wall paintings to be used to depict the story of Jesus Christ for a population with an illerate majority.

Steps to the Pulpit from the North Aisle

The stone Font stands on a square plinth.  It has a round bowl and a wooden lid with a mounted cross.  The inscription reads RR 1661 RI CW.  It is thought that the CW perhaps stands for Church-Wardens, but the other letters remain a mystery.  The Font could be earlier than the date suggests.

It was custom for clergy to robe up behind a curtain placed at the east end of the North Aisle.  In the 1940's the curtain was replaced by a wooden screen.

It was decided in 1966 that a permanent vestry should be built.  The Vestry blends in with the Church perfectly, the stone having been sourced from a derelict barn in Over Whitacre.  It was dedicated by the Bishop of Coventry at Evensong on 7th January, 1968.

The Chancel was rebuilt and enlarged around 1300.  The walls are of roughly coursed rubble.  The window above the altar shows the scene of Jesus Christ crucified.  The glass was given to the Church in the 1880's by Samuel Moggs in memory of his family.  The grave of Samuel Moggs is in the Churchyard.

The two other picture windows in the side walls are memorials.  The left one to the Boddington Family and shows the Baptism of Jesus in the river Jordan.  The right one to Joseph Moggs and shows the scene of the empty tomb of the risen Christ.

This narrow doorway was used by the Priest in medieval times to enter fully robed and spiritually prepared for worship.  The doorway is now used for displaying the Memorial Book and flowers of remembrance.

The Oil Lamps mounted either side of the arch were placed there by a soldier in December 1902 in grateful thanks for his safe return from the Boer War.