CASTLE CLUGGY CHARITABLE TRUST is constituted as a Scottish Charitable Incorporated Organisation (SCIO), a charity registered in Scotland, to raise money and apply for grant aid funding  to carry out consolidation works to preserve the remains of Castle Cluggy.

The charity's purposes are the advancement of heritage and education for the benefit of the public, in particular through the maintenance, repair and preservation of the physical remains of the structure known as Castle Cluggy on the Dry Isle. Importantly, funding will be used to offer local people training in heritage skills as well as a community archaeology project attracting volunteers keen to dig into the area’s past, working with local schools to advance public education in history and architecture.

The HEAD TRUSTEE (chairman) belongs to a family that has intermarried with the Murrays for many years and he is a Murray through his mother. He has a deep love of Scotland and its history and heritage, especially castles which are an active passion, and the connection with the Murray clan first sparked his interest in bringing the ancient structure back to good health and protecting it for future generations. The Proprietor of the Ochtertyre Estate placed Castle Cluggy together with the land known as the Dry Isle, which is still his heritable property, into the Trust's safe keeping for the benefit of the nation. It is held in the name of a custodian trustee who holds the property on trust for the charity.

Traditionally, the owner of a castle appointed an officer called the Keeper or Captain, responsible for overseeing the castle and its defence, keeping it in readiness on their behalf. The Head Trustee is proud to retain the courtesy title of ‘Captain of Castle Cluggy on the Dry Isle’. 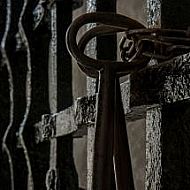 SYMBOLIC KEYS TO THE CASTLE
The key of the tower was found in 1846.

“The castle, and all it represents, will always be with us. Once it was born, once the stone was made living, the repository of power made real, the idea could never be unmade. Even if all the castles of all the world were destroyed, in the minds of men they would be built anew; the wizard called imagination would raise high walls and towers out of ruins.”