DESPITE its ruined state, this hidden gem hides a thousand years of history. The Battle of Monzievaird was fought nearby in 1005 and it is possible that some form of residence had been established on the Dry Isle by this time. The castle may have been built as early as the 12th-century. Fortified since at least the 14th-century - the fortress was referred to as ‘ancient’ in a charter of 1467 - much of the original castle has been destroyed revealing an impressive square tower with thick walls and arrow slots at various levels. Tradition has it that Castle Cluggy was the home of  John Comyn III, Lord of Badenoch, known as ‘the Red Comyn’, an important figure in the Wars of Scottish Independence, and Guardian of Scotland for a time, probably best known for having been stabbed to death by Robert I (the Bruce), King of Scots, at the high altar of Greyfriar’s Kirk in Dumfries in 1306. 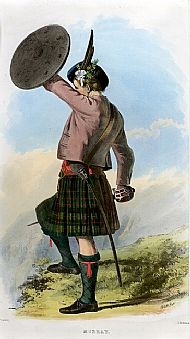 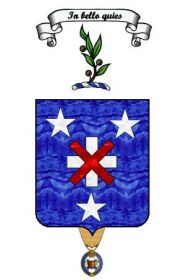 Murray of Ochtertyre, Perth in the Baronetage of Nova Scotia (1673)
Motto: In bello quies (Calm in action)

According to Thomas Rymer’s ‘Foedera’, written in about 1705 from extant documents of the time, Malise (Earl of Strathearn) was besieged at Castle Cluggy in about 1306 by Robert the Bruce. The site was a pawn in extended blood feuds between the Drummonds and Murrays until ownership was settled in favour of the Murrays.

The lands of Ochtertyre and Castle Cluggy were given in the 15th-century by Sir David Murray of Tullibardine to his fifth son, Patrick, the first styled ‘of Ochtertyre’, on the occasion of his marriage, and the castle was owned by an unbroken succession of generations of the Murray family for several centuries.

Castle Cluggy was still intact complete with its fosse (ditch) and drawbridge when Oliver Cromwell’s troops came to visit it during their invasion in the 1650s. It is thought that Sir William Murray, 1st Baronet of Ochtertyre, last inhabited the castle in the middle of the 17th-century. Now, as befits its dark, feudal past, the drawbridge is being pulled back on access to one of Scotland’s least known historic castles.

THE MURRAY baronets of Ochtertyre can claim a very respectable antiquity and they have been connected with Perthshire for a considerable period. They descend directly from the Murrays of Tullibardine, ancestors of the Dukes of Atholl, Chiefs of the Name and Arms of Murray, and of other cadet lines.

A FULLY ILLUSTRATED NEW BOOK giving a fascinating insight into the castle's development has been published. All proceeds from the sale of this book will be going to the charity to raise funds vital funds to save the castle. Limited to 50 copies worldwide, The History of Castle Cluggy - ancestral seat of the Murrays of Ochtertyre has been researched and written by the Head Trustee, with a foreword by the Lord-Lieutenant for Perth and Kinross, and is available to purchase in soft copy direct from the author for £9.99 plus postage. 100 pages and lavishly illustrated throughout, this book would make a unique gift for history buffs and locals.