to someone who can help you 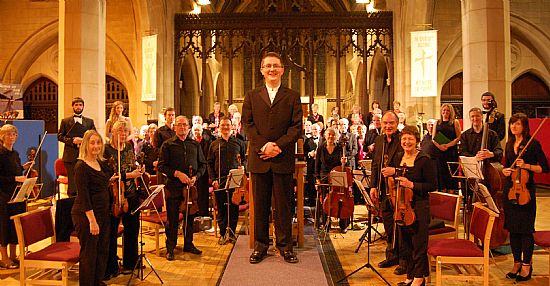 Ruddington is a large village some five miles south of Nottingham. Ruddington and District Choral Society was formed in 1962 as an Evening Class, and has grown and developed since that time to a group of some sixty members who live in the Nottingham area. We meet on Monday evenings in school terms, generally from September to May.

We participate in a small number of concerts each year, accompanied usually by organ or by a small group of instrumentalists.  We generally give a charity concert at Christmas time, performing a Community Messiah (with audience participation) or a carol concert in alternating years, the latter alongside a local band.

From our last Community Messiah, December 2015:

"I'd also like to extend my thanks to you and the Choral Societyfor inviting me to sing with you. It has been a few years since my last performance of the Messiah, and the choir, as well as those who came to sing along. aquitted themselves admirably. A splendid performance."

Below are part of messages of advice and support for our Choir (July 2014) from Dr Stephen Cleobury, Musical Director of the internationally renowned King's College Chapel Choir in Cambridge and Sir John Elliot Gardiner, conductor of the Monteverdi Choir and Orchestra of the Age of Enlightenment. They both praise the many benefits of singing in general and choral singing in particular.

Messages of Support to the Ruddington & District Choral Society

"To be part of your local choir is really rewarding. You sing wonderful music, itself life-enhancing. The act of singing helps you relax at the end of a day's work. It also enhances your social life, as you meet other people and help to build up community spirit. You can invite your friends and relations to your concerts, and they can celebrate with you the satisfaction to be gained from giving a fine performance."

"We should never underestimate the value of choral music in the social fabric and musical life of this country: amateur choirs are its very bedrock...  The .. basis for the existence of professional choirs in the UK is on the one hand the presence of youth choirs and on the other the significant contribution made by adult amateur choirs in raising public awareness and enthusiasm for choral music.  Now, more than ever, we need to cherish those passionate advocates of choral singing and to give wholehearted support to their work"

and Orchestra of the Age of Enlightenment

Ruddington & District Choral Society is always very happy to welcome new members who wish to sing with us. Just go to the link above for information about how to join.

The Society is registered as a charity, number 1039384