The Hearth Tax records of 1670 show ownership of properties in the Neath town centre.  The Hearth Tax was a money-making scheme introduced in 1662 and eventually done away with in 1689.  The tax was based on occupiers, not landlords.  Two shillings per hearth was paid by the occupier in two installments at Lady Day (25th March) and Michaelmas (29th September).  Small dwellings were exempt and these included those occupied by people on poor relief and houses worth less than £1 per annum and not paying parish rates.

Two properties in the town centre had ten hearths.  One of those was occupied by a merchant’s widow, Margaret Love, and was sited in High Street.  The other was the Great House in what was then Wind Street (today Green Street), occupied by Sir Herbert Evans and with its garden and outbuildings, filling the square today surrounded by New Street, Green Street and The Parade.  Another house of nine hearths in Water Street was owned by Thomas Evans esquire, also of the Gnoll.

There are a couple of houses with seven hearths and one of those was owned by Frances Button in Wind Street.  It was described a few years earlier as a mansion house together with garden, barn, cow-house, brew house, crafts and other appurtenances.  Who was Frances Button?  The family name was not native to Neath and in fact came from the Vale of Glamorgan near St. Nicholas.  There the Button family held the manor of Worlton or, as it is better known today, Dyffryn House.

The manor of Worlton near St. Nicholas, Cardiff, had been in existence since the seventh century.  It was not until the eighteenth century that the name was changed to Dyffryn.  The Button family acquired the manor in the mid-sixteenth century and built the first mansion there.  This was later replaced by a Georgian building that itself was replaced by the Dyffryn House that we know today. 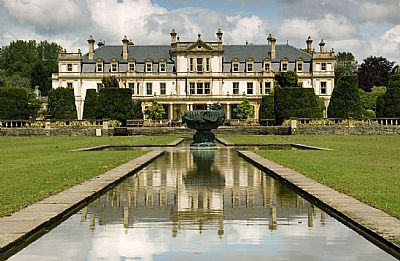 Dyffryn House from the Great Lawn

One of the earliest family members to live there was Miles Button (1545-1597) and it was his daughter Ann who started the Neath connection when she married David Evans of the Gnoll.  She was his second wife and they had two sons, one of whom was the Thomas Evans already mentioned having a large house in Water Street.

Edward died about 1644 leaving one son and heir, the last of the Evans family at the Gnoll, Sir Herbert Evans (died 1679).

Thomas Evans of Water Street, leased the Gnoll from his young nephew in 1658 and a condition of the lease was that he built a new house there; hence the 1666 house which can be seen in a painting, standing in front  of the Mackworth mansion.

Miles Button’s eldest son, Sir Thomas, married Elizabeth daughter of Sir Walter Rice of Newton and Dynevor, and she was sister to David Evans of the Gnoll’s first wife, Eleanor (or Ellen).

Explored the Hudson Bay area in Canada and searched for the North-west passage.

One piece of land he claimed was given the name New Wales.

The convolution of dynastic relationships gets worse!  Frances Button’s husband, Edward Evans, died about 1644 and she was remarried to Miles Button.  According to the Neath Lay Register this Miles Button died in 1667 but no trace has been found of his birth, marriage or burial apart from this lay account.  He was most certainly a relative of his wife prior to their marriage but the details of that relationship are not known.  Frances therefore started life as a Button and ended her life as a Button.  There were no children from her marriage to the almost anonymous Miles Button and so the name Button died out in Neath.