THE STONE WITH A HIDDEN SECRET

The quite large old stone had been in the churchyard of St. Mary Llansawel for longer than anyone could remember.  A large sandstone lump much weather beaten and eroded; it had obviously been worked by skilled hands for a specific purpose many centuries ago.  Due to the square socket cut into its upper face, the conclusion arrived at by clergy, historians and antiquarians was that this stone had formed part of a churchyard cross.

That decided, it languished in the churchyard left in peace until 1931 when a rearranging of access and general 'tidying up' of the burial ground required to be relocated. Under the direction of the vicar Walters, two sextons set about moving the stone.  Thereby, on laying the stone on its side the long forgotten 'secret' was discovered; a large hollowed out recess.

Why was this done, was the obvious question?  There was no reason to suspect that it was done purely to make the stone lighter and easier to manipulate. The vicar contacted Glen A Taylor, a leading light of the Neath Antiquarian Society, expert in church architecture and the driving force behind excavating the Neath Abbey ruins.

Glen Taylor viewed the artefact, took photographs and formulated his own conclusions, as can be seen in his letter to the vicar on 25th June 1931 with the accompanying sketch and conjectural construction.  The following day, he also wrote to Aymer Vellance who was a leading authority on churchyard crosses hoping to have his opinion confirmed or refuted. 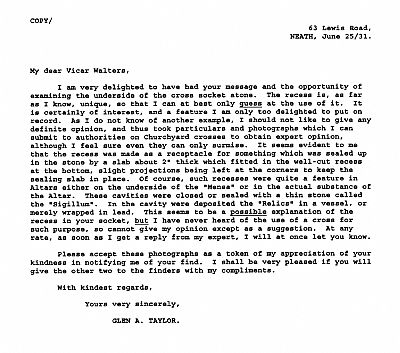 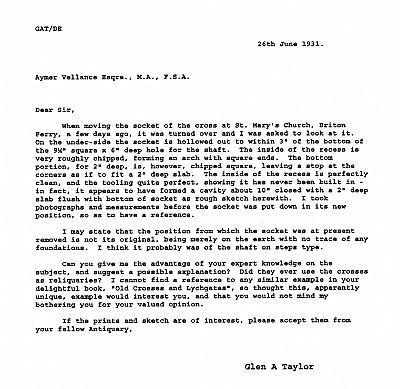 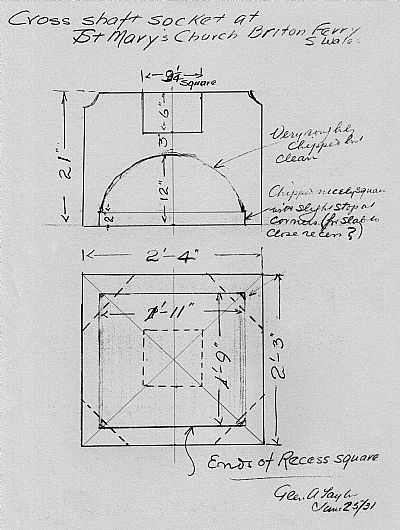 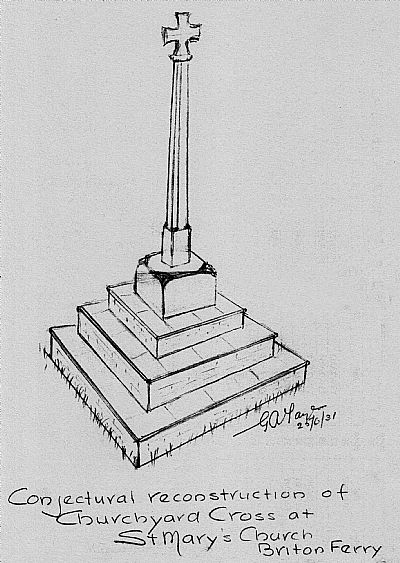 Sadly, we do not have the reply. As to what, if anything, was hidden in the recess? - Well, the stone (remainig in positon) keeps that secret still.