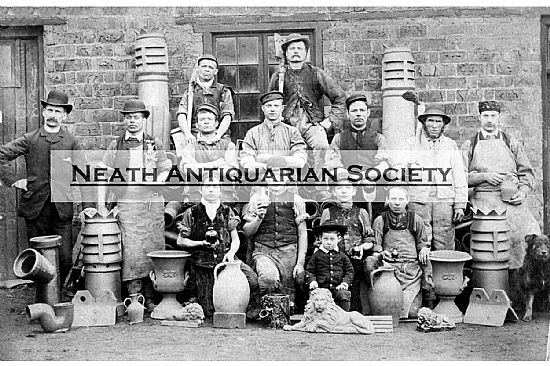 Workers at the Cambrian Pottery proudly display their products

Thanks go to our friends on the social media sites and in particular to Mark Lemon for his billheads which have confirmed the previous held opinions relating to the image.

It is not uncommon to find evidence of pottery related businesses anywhere in the country where a supply of clay can be found close by either from river environs or from mining activities and Neath was no exception.

John Brooks Taylor was of the second generation of a family that had moved from Devon seeking employment due to the early 19th century industrial expansion of Neath.

Following education at Alderman Davies' school he was indentured as an apprentice to Thomas Andrews (Mayor of Neath 1868), who as well as having general and furnishing businesses in New Street and Green Street, operated kilns manufacturing pottery and bricks at Millands.

Such was Taylor's ambition that on completion of his apprenticeship he established his own manufactory at Marshfield Road in 1882, where pottery goods of all types were made for a number of years.

It was popular in those days to reinforce a Welsh or local connection and thus (derived from Cambria and Cambrensis) he used the name of Cambrian Brick, Tile & Pottery Works (this is not to be confused with the Cambrian Pottery at Swansea which made fine china and porcelain, even though it has a Cadoxton connection).

The clay used was obtained from shallow pits in the Cwrt Sart area.  Digging for the clay resulted in the discovery of several items of archaeological interest such as a Roman Milestone (now at the National Museum of Wales, Cardiff), a paved Roman road, animal remains and fossilised trees and ferns.

The pottery closed sometime after the end of World War One when the supply of local clay ran out. However, John Brooks Taylor had other brick and pottery interests operating in Eaglesbush Valley, Melincourt Valley and at Cwmdu, Skewen.